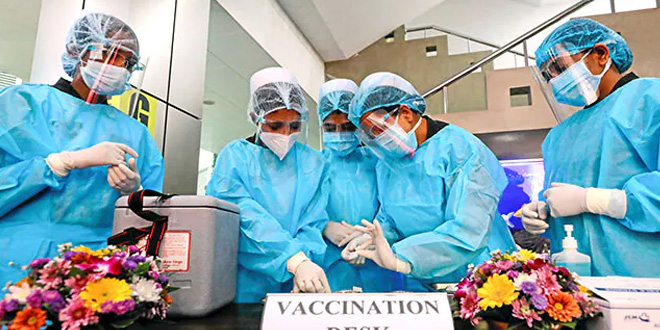 New Delhi: Sindh-born Kamla Das who turned 100 during the height of the pandemic in Delhi last September, got her first shot of COVID-19 vaccine here on Thursday (March 18), her daughter said. The centenarian woman, wife of late Maj Gen (retd) Chand N Das, was born on September 3, 1920, and said the jab was “totally painless”. “My mother turned 100 during the pandemic and we held a three-day celebration from September 2-4 to allow guests to come, as large gatherings were not allowed then. My siblings were fearful that she could contract COVID-19, but we thought she has lived a good life and not everyone gets to see their 100th birthday. So, we made it a special one for her,” her youngest daughter Jyotica Sikand told PTI.

Resident of south Delhi, she was administered the vaccine at BLK Hospital here, a day after Brij Prakash Gupta, also born in 1920, had received his first shot of Covieshield vaccine at the same facility, a spokesperson of the hospital said. Ms. Sikand, 72, said,

We allowed her to live a very normal life even during the entire pandemic last year. And, she’s fine and today also got her shot. She told me that the shot was so painless, she doesn’t recall which hand it was administered in, the daughter said in a lighter vein.

Ms. Sikand remembered her father, Maj Gen Das, who had served in the Second World War and retired from the Army in 1965, and also authored many books on the armed forces.

He was born in Lahore and educated at Government College, Lahore and received his military training at Royal Military College, Sandhurst in England, and Staff College, Quetta (now in Pakistan). He was commissioned in the British Indian Army in 1933 and posted as a Subaltern with the Lancashire Fusiliers. He joined the 5 Battalion of the Rajputana Rifles in North West Frontier Province in 1934. During his 32 years of service with the Army, he held both command and staff appointments at many levels. During World War II, he served in Hong Kong, Burma, Italy and Greece and was awarded the Officer Class of the Most Excellent Order of the British Empire (OBE) in recognition of his distinguished service, according to information shared by his daughter.

She said her mother’s father was in the railways and the family lived mainly in Lahore.

My mother, who has so many stories and memories, was born in Sukkur in Sindh province (now in Pakistan). She went to Sacred Heart School and Kinnaird College, both in Lahore. None in my family migrated, and my father just happened to be posted in Delhi when the partition happened. My father was born in 1911 and died in 2006, aged 95. When my mother turned 100 last year, defence personnel had come from the Rajputana Rifles regiment to honour my mother with a ceremonial gesture on September 4. And, later a small event was held at Raj Rif here to mark her 100th birthday. The Indian Army is truly a family. Such a touching gesture it was, the daughter recalled.