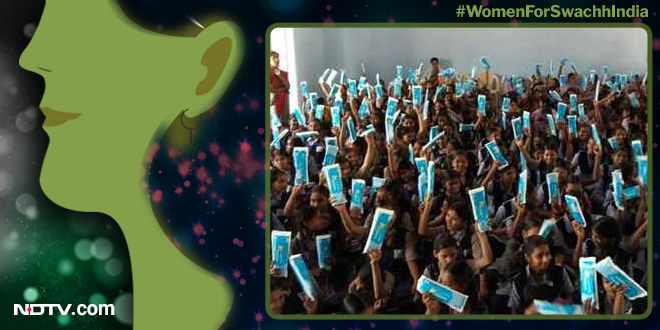 New Delhi: It was the occasion of an annual function at a secondary school in Rajasthan’s Dholpur district in May 2017. Manoj Kumar, the district health officer was one of the dignitaries invited to the function. While giving a short speech on the importance of education, Mr Kumar noticed the alarmingly low number of girls present in the crowd of school students. On enquiring further, he was told that many girls drop out of school on reaching the sixth or seventh standard as they reach puberty. In a remote district like Dholpur, a primary school is barely equipped with a functional toilet, let alone something as essential as sanitary napkin dispensers. But more than the infrastructure for young girls in Dholpur, like millions of others in districts, towns and cities across India, menstruation remains a biological event shrouded in mystery and taboo, not to be spoken about openly.

355 million is the number of menstruating women in India, accounting for nearly 30 per cent of the country’s population. Menstruation continues to be a subject of gender disparity in India. Myths about menstruation are largely prevalent, forcing many girls to drop out of school early or be ostracised for the duration of their menstrual cycle every month. A 2014 report by the NGO Dasra titled Spot On! found that nearly 23 million girls drop out of school annually due to lack of proper menstrual hygiene management facilities, which include availability of sanitary napkins and logical awareness of menstruation. The report also came up with some startling numbers. 70 per cent of mothers with menstruating daughters considered menstruation as dirty and 71 per cent adolescent girls remained unaware of menstruation till menarche. A 2014 UNICEF report pointed out that in Tamil Nadu, 79 per cent girls and women were unaware of menstrual hygiene practices. The percentage was 66% in Uttar Pradesh, 56% in Rajasthan and 51% in West Bengal. 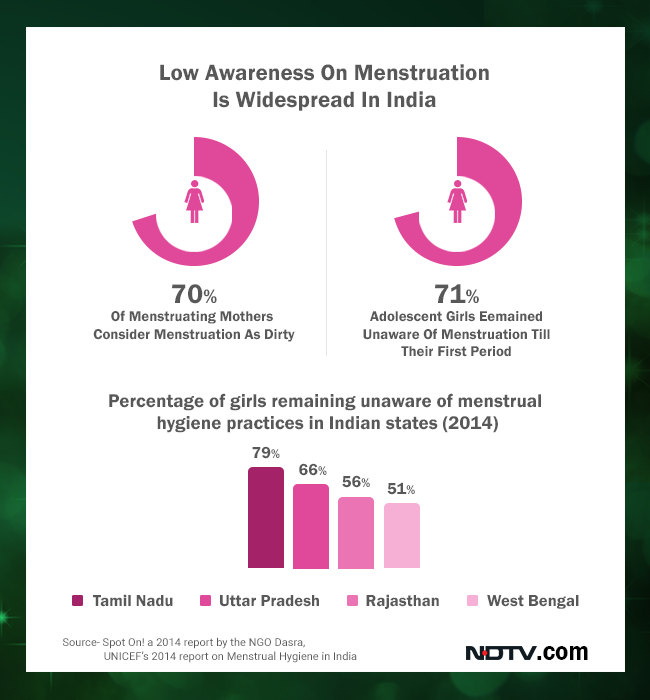 Low awareness on menstruation is widespread across many states in India

The problems with menstruation in India are that they are similar to a chain of command, related to each other. There is no awareness on menstruation, hence it is considered dirty. Being a ‘dirty’ occurrence, a menstruating girl is isolated or forced to drop out of school as unlike urban areas, access to sanitary napkins in rural areas is low. This cycle is handed over from mother to daughter but the taboo on menstruation remains, said Meenakshi Sharma, Coordinator for Menstrual Hygiene Management, WASH Alliance.

Lack of awareness makes for a major problem in India’s menstrual hygiene scenario. Indian Council for Medical Research’s 2011-12 report stated that only 38 per cent menstruating girls in India spoke to their mothers about menstruation. Many mothers were themselves unaware what menstruation was, how it was to be explained to a teenager and what practices could be considered as menstrual hygiene management. Schools were not very helpful either as schools in rural areas refrained from discussing menstrual hygiene. A 2015 survey by the Ministry of Education found that in 63% schools in villages, teachers never discussed menstruation and how to deal with it in a hygienic manner.

Women across India grow up remaining unaware of the real reasons for menstruation and the importance of menstrual hygiene. The taboo surrounding menstruation remains a part of their growing up and continues with their daughters. Hence, the lack of awareness is carried forward via generations in India, said Supriya Khanna of Indian Council for Medical Research.

In a city, availing a sanitary napkin for a woman aware of menstrual hygiene is a normalised process. Not only are sanitary napkins available in pharmacies and grocery stores in cities, they are commercialised via advertisements so that they are treated as any other product. In rural areas, sanitary napkins are found with difficulty. Most girls rely on home-grown or other readily available material, the latter often being unhygienic and unsanitary. Only 2 to 3 per cent women in rural India are estimated to use sanitary napkins. The lack of demand results in storekeepers not stocking up on sanitary pads. This results in women resorting to unhygienic practices during their menstrual cycle, such as filling up old socks with sand and tying them around waists to absorb menstrual blood, or taking up old pieces of cloth and using them to absorb blood. Such methods increase chances of infection and hinder the day-to-day task of a woman on her period. 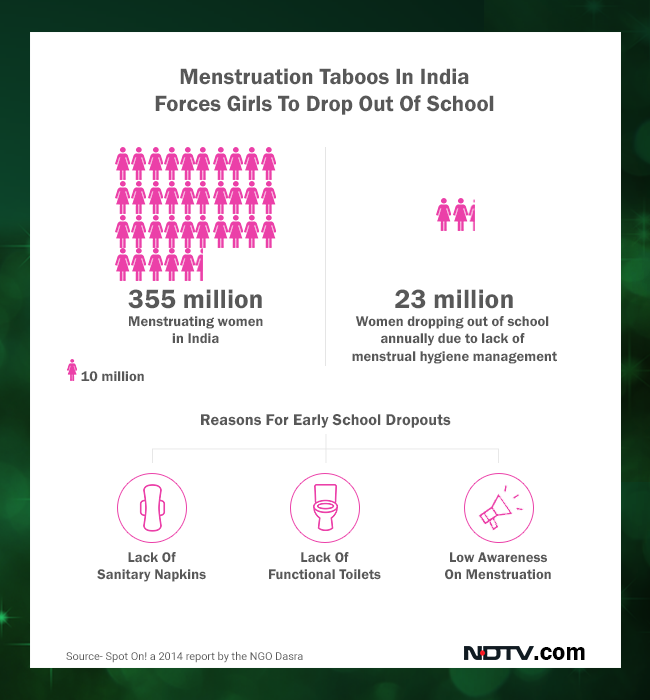 It has been seen in rural areas that two-three women of the same family use the same cloth during menstruation, after washing and drying it. This is extremely unhealthy and brings numerous health risks. Sanitary napkins are a luxury in rural areas and small towns. Even if available, women are discouraged from spending on sanitary napkins as old clothes or sand is thought to be good enough for something ‘dirty’ like menstruation, said Ms Sharma.

Surveys by the Ministry of Health in 2002, 2005, 2008 and 2012 found out that most problems related to menstrual hygiene in India are preventable, but are not due to low awareness and poor menstrual hygiene management. This resulted in development of some serious ailments for adolescent girls. Roughly 120 million menstruating adolescents in India experience menstrual dysfunctions, affecting their normal daily chores. Nearly 60,000 cases of cervical cancer deaths are reported every year from India, two-third of which are due to poor menstrual hygiene.

Other health problems associated with menstrual hygiene like anaemia, prolonged or short periods, infections of reproductive tracts, as well as psychological problems such as anxiety, embarrassment and shame.

Menstruation is such a taboo subject that many women are ashamed even to seek medical advice if they face any health problems due to menstruation. Unhygienic menstrual conditions often result in women developing health problems which are further aggravated due to their inability to seek medical help on time, said Sahana Bhat, Co-founder of the NGO Sukhibhava which works in the field of menstrual hygiene. 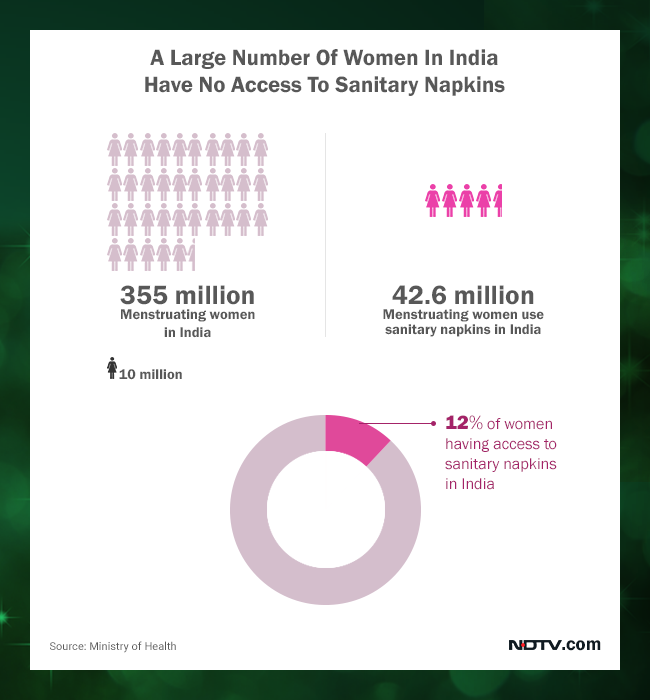 From a ban on advertisements on sanitary napkins in 1990, to a full-fledged feature film, PadMan, on a low-cost sanitary napkin entrepreneur in 2018, India has indeed come a long way. It was eight years back in 2010, when the Ministry of Health and Family Welfare launched the Freeday Pad Scheme, a pilot project to provide sanitary napkins at subsidised rates for rural girls. The scheme was launched in 152 districts across 20 states and sanitary napkins were sold to adolescent girls at the rate of Rs. 6 per pack of six napkins by Accredited Social Health Activists (ASHAs). The estimated cost for the entire scheme was Rs 70 crore.

A year later, the Union government launched the SABLA scheme across 2015 districts in the country. The scheme aimed at improving health conditions for adolescent girls with menstrual hygiene as an important component. Two years later, under the then ongoing Nirmal Bharat Abhiyan, focus on menstrual hygiene was added as a key component of the sanitation mission. In 2014, the Union government launched the Rashtriya Kishor Swashthya Karyakram, aimed at improving the health and hygiene of an estimated 243 million adolescents. Menstrual hygiene was also included as an integral part of the programme.

Under the ongoing Swachh Bharat Abhiyan, menstrual hygiene has been given high importance. The Swachh Bharat (Gramin) guidelines explicitly state that funds allocated for information, education and communication (IEC) maybe spent on bettering awareness on menstrual hygiene in villages. Adequate knowledge of menstrual hygiene and development of local sanitary napkin manufacturing units is encouraged by Swachh Bharat Mission (rural) and self-help groups are to help in propagating such efforts.

Looking Ahead: An India With Proper Menstrual Hygiene

“The myths and taboos surrounding menstruation need to be broken down effectively before schemes and incentives make their way to make life better for menstruating women,” said a WaterAid India official.

Also Read: Women’s Day 2018: Meet The Award Winning 27-Year-Old, Who Has Come Up With 100 Per Cent Biodegradable Sanitary Napkins