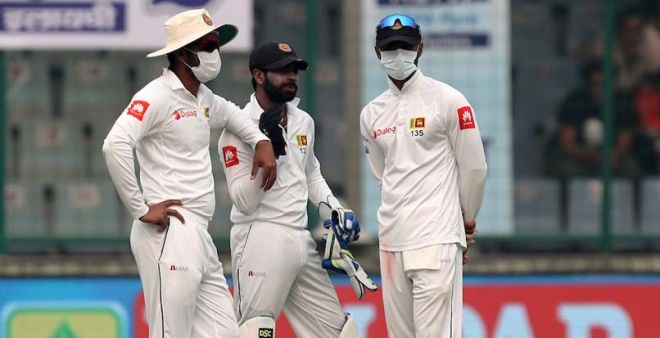 New Delhi: For the first time in history, Air Pollution halted International cricket match in the national capital’s Ferozshah Kotla stadium on Sunday. The third Test between India and Sri Lanka saw the game being temporarily held up due to ‘poor air quality’, with Sri Lankan players sporting air masks on the field and complaining about breathlessness. The Air Quality Index (AQI) in the national capital rose to the levels that were last recorded in November, when Delhi government declared the national emergency in the city. And as soon as the match was disrupted, netizens started posting about all the commotion and frustration on Twitter.

Umpires are not equipped to make such decisions. It has to be decided by health experts. But the objective should be to play as far as is possible https://t.co/qzbEfrBl8s

Cricketer Gautam Gambhir criticising the political apathy towards tackling Air Pollution, said the government is overlooking the pollution problem, and debating film releases and drawing diet charts for the people instead of addressing real issues. He said,

“This should be a wakeup call for Pakistan. Our children are at a huge risk because of dangerous pollution levels. We must mobilise the entire nation and take steps to fight climate change & pollution.”

This should be a wakeup call for Pak. Our children are at a huge risk because of dangerous pollution levels. We must mobilise the entire nation and take steps to fight climate change & pollution. https://t.co/oggp1dOejR.

Roshan Abeysinghe‏, a Radio Cricket Commentator from Sri Lanka added, “Really sad and disappointed to read the response from people especially some former players on SL’s using masks to overcome the smog and pollution! Isn’t it fair that they protect themselves?”

And there were some more reactions.

Play being halted due to smog/pollution in Delhi has to be a wake up call for everybody ! Like seriously !

Delhi better do something about its #airpollution. #SriLanka cricketers wearing masks at Kotla may have been making a point but Delhi residents have to live in unhealthy smog. Will someone clean up the air and stop playing games @IndianDiplomacy pic.twitter.com/ItUPHiPPN3

Concerned with Delhi’s deteriorating air quality, on Monday, National Green Tribunal slammed Delhi Government and authorities for holding the match in Delhi, despite air quality in the region being at hazardous levels. The green court has also set a strict deadline for the Delhi government and has asked them to submit the action plan on the steps taken to curb air pollution in the city within 48 hours.

Now A Toilet That Can Flush Itself: Rajdhani, Shatabdi To Have High-End Toilets In 29 Trains