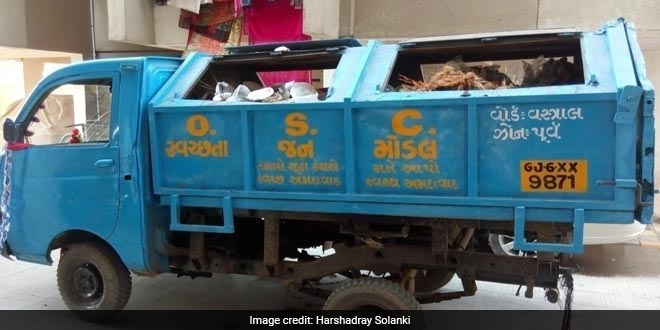 Ahmedabad is going the whole hog starting July to curtail the quantum of waste generated and dumped in the landfills. Amdavad Municipal Corporation (AMC) will introduce a rule from July under which the municipal trucks will stop collecting wastes from households and societies if the waste is not segregated into dry and wet waste.

“We aim to recycle or reuse 100 per cent of Ahmedabad’s waste by next year,” Harshadray Solanki, Director of Solid Waste Management, AMC tells NDTV. To reduce the burden on Pirana landfill, situated on the outskirts of the city, the AMC took the decision of implementing the practice of waste segregation at source nine months back. It started with 6 municipal wards and 5000 houses and within a span of few months the number steadily grew to 50,000 houses practicing the waste segregation. With a success rate of 80 per cent, the AMC finalised the plan of garbage segregation at source since it has helped the corporation in cutting down its waste generation.

Nearly 80 per cent of the waste collected from these households have been recycled and the rest 20 per is scientifically disposed of, says Mr Solanki. He further adds, According the Solid Waste Management rules 2016, the onus of segregating waste is on the producer. To ensure that the rule is followed, this new rule will be introduced.

To ease the process of waste segregation, the AMC sends two separate trucks – one which collects dry waste and other which collects wet waste. Once the new rule comes into practice, the AMC will deploy another 1,000 such trucks to collect dry and wet wastes.

Currently, the city generates nearly 4,000 tonnes of wastes on a daily basis, out of which half of the waste is either recycled or composted. The city, at present, has three composting plants which composts 1,200 tonnes of waste daily. To scale up waste segregation in the largest city of Gujarat and to decompose the other half, the AMC will take multiple steps from making every resident of the city aware about installing solid waste-to-energy plants, according to Mr Solanki.

With the World Environment Day (June 5) just round the corner, the AMC in collaboration with the Confederation of Indian Industry (CII) will inaugurate a competition under ‘My Waste, My Responsibility’ to create awareness among the citizens of Ahmedabad.

The competition will be conducted across schools, colleges, companies and hotels and will go on for a period of three months. The participants will be monitored by the CII and will be marked on four parameters – waste segregation, littering, location of dustbins and on-site treatment of garbage.