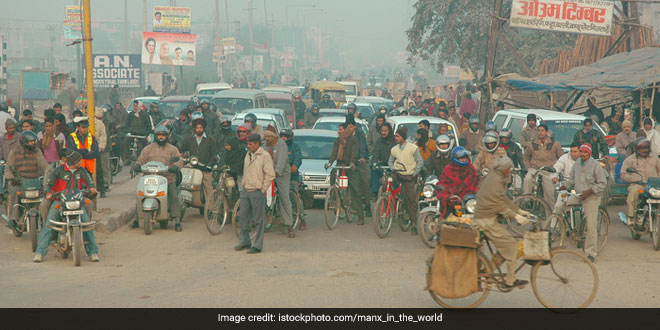 New Delhi: Delhi’s air quality stayed in the very poor category on Thursday, with numerous areas nose-diving in the “severe” level of pollution. According to the Centre-run System of Air Quality Forecasting and Research the overall Air Quality Index (AQI) of Delhi was recorded at 315 as against the prescribed limit of 100. The PM2.5 level touched a new high at 158 as authorities predicted further deterioration of air quality in the coming days. The PM10 level stood at 332. Experts and doctors have suggested avoiding any type of physical outdoor activities as the pollution has affected the health of the citizens on a large scale.

Past one month has seen 30% rise in cough and cold and other respiratory issues. Not only are the patients who are suffering from asthma or some chronic illness but other patients have also have been complaining about cough a lot, Dr. Dhiran Gupta, Shri Ganga Ram Hospital in New Delhi told NDTV

According to researchers, there are multiple sources of air pollution in New Delhi. Dust constitutes to 17 per cent. Vehicles, especially that run on diesel, contribute 28 per cent and to that, stubble burning adds another 4 per cent.

Arunabha Ghosh, CEO Council on Energy, Environment and Water and member of Environment Pollution (Prevention and Control) Authority (EPCA) told NDTV that this year the pollution is expected to be in a better control as compared to previous years as they initiated Graded Response Action Plan for the second year and also took some significant steps to manage the annual air pollution issue.

More mechanised road sweepers and water sprinklers have been purchased and we have issued directives for road dust and waste burning, he added.

Saurabh Bhasin, lawyer and the petitioner who filed the public interest litigation (PIL) against the sale of firecrackers, questioned why the action plans are implemented when the emergency is at its peak.

A large part of the problem is that we implement these plans in the last moment. We need to keep a check on pollution throughout the year because it is a round the year problem, he said.

Mr. Bhasin also highlighted how this severe level of air pollution is not just an issue for Delhi or NCR, but also a nation-wide health emergency.

It’s a national health emergency and not just a national capital emergency. In the northern Ganges belt, there are 550 million citizens and this air emergency is a major threat to their health. It needs an urgent intervention by all the authorities, be it Central government, Delhi government, all the municipalities, and it is absolutely shocking to hear the blame game is constantly being played amongst the different governments, with lives of millions of people at stake, he added

Mr. Ghosh too stressed on the air pollution not being an environmental issue alone, but a public health issue and economic productivity issue. He further added that this is not a seasonal matter or a sub-regional matter either.

It is a national issue and impacting us all year round, Mr. Ghosh added.

Talking about the specific levels of pollution around Diwali and the ban on sale of firecrackers, Mr. Bhasin told NDTV that there’s no ban as of now but when there was a ban people opposed it and burned firecrackers either way with the message of religious sentiments.

It is never about the religion when it comes to air pollution. Doctors around the world have time and again insisted that the amount of pollution around Diwali is atrocious and awfully unhealthy and therefore we need to combat that accordingly, said Mr. Bhasin.

This year authorities have implemented two plans to fight pollution – The Graded Response Action Plan and the round the year plan yet there’s no rescue. Sidhharth Singh, author of the book ‘The Great Indian Smog’, points out in the book how more Indians are killed in India every week due to air pollution as compared to all the people who died during all the India-Pakistan wars since Independence.

While talking about what could be done to fill the gap between the initiatives and the issue in hand, Mr. Singh told NDTV,

There many agencies in place to combat this problem in various ways yet the responses have not been coordinated in any fashion. There’s no over-arching umbrella policy to coordinate all the efforts across the various sectors of the economy. The key aspect to notice is that even if EPCA was successful in implanting action plans, unfortunately, this part of India, as I call it meteoroidal misfortune in my book, due to meteorological and geographical aspect, the particles in the atmosphere get settled above this part of the country.

The issue of stubble burning cannot be ignored while talking about air pollution in northern India. However, stubble burning is not just limited to India, it is done by various parts of the world including the United States, but they have a certain types of guidelines issued for them to follow in order to avoid air pollution.

Mr. Ghosh believes that such guidelines can help the farmers as well as citizens of our country as well. “Rethinking the agriculture strategy is definitely a solution, why are we making farmers in Punjab and Haryana grow paddy when the residue is unmanageable and leads to such hazards, he said.

Mr. Saurabh Bhasin suggested various measures that could be taken to curb air pollution like increasing the number of public buses by 9000, cleaning and building more footpaths, urge the citizens to use public transport as well as enforcing appropriate guidelines for constructions activities.

Eliminating Emissions In India And China Can Add Years To People’s Lives: Study