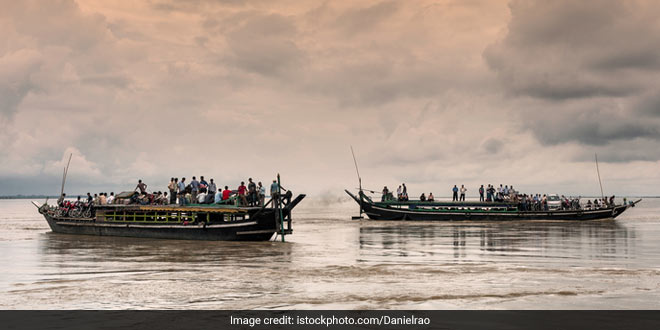 Guwahati: The turbidity level in the Bramhaputra river at three places in Assam is much beyond the permissible limit for use as potable water, a state water resources department release said on December 9. The Brahmaputra- Assam’s lifeline- has turned muddy and its water has changed colour for over a week now in the non-monsoon season causing concern among people and authorities in the state. People living along the river’s banks have said that they were not being able to drink the water as it had become muddy. There were media reports about the turbidity level of the Brahmaputra.

The department had collected water samples from Mainjanghat and Bogibeelghat in Dibrugarh district, and Jahajghat in Sonitpur district, and got them tested in different laboratories, the release said.

Also Read: Brahmaputra River In Assam Has Changed Its Colour And Has Turned Muddy

The turbidity was found to be 296 NTU, 404 NTU and 162 NTU in Mainjanghat, Bogibeelghat and Jahajghat respectively as against the Bureau of Indian Standards’ permissible level of 5 NTU, it said.

From the reports received so far, it is observed that the turbidity level of water is found to be much beyond the permissible limit for using as potable water, the release said.

On the directions of Chief Minister Sarbananda Sonowal, the state government has sent samples taken from the Brahmaputra for testing to the Indian Institute of Chemical Technology in Hyderabad and IIT-Guwahati, a release from the Chief Minister’s Office (CMO) said.

Director General of Fire Services A P Rawat has sent the samples taken from 15 locations to the institutes to zero-in on the causes behind the river’s water changing its colour, it said.

The report would be submitted to the state government for remedial steps, the release said, adding the Centre’s attention has been drawn to the situation.

The issue was discussed in a meeting chaired by Chief Minister Sonowal here on December 4, following which the department took the matter up with the union water resources ministry for a detailed report from the CWV on the causes behind the “unusual phenomenon”, the water resources department release said.

The release said that another request was sent to the union water resources secretary to share all hydro-meteorological data of the river in Tibet as obtained from China from time to time.

Minister Mahanta has requested the union water resources minister to apprise the state of the causes behind the development in the Brahmaputra and urged his ministry to protect the river in the interest of the state.

Directing that constant watch be kept on the quality of water, Minister Mahanta has instructed executive engineers of Guwahati East and West, Dhemaji, Dhakuakhana, Dibrugarh, Tezpur, Mangaldoi, Nalbari, Barpeta, Goalpara, Palasbari, Nagaon, Morigaon, Sibsagar, Neamatighat, Jorhat and other places to collect samples from the Brahmaputra twice a week and get them tested.

State Health Minister Himanta Biswa Sarma had claimed that the construction of a dam or some accident in China had caused the Brahmaputra’s water in Assam to have the “abnormal deviations”, turning it muddy and contaminating it with cement particles.

We have tested a few samples in Tezpur (at the district level laboratory of Public Health and Engineering Department). The report showed that the the water contained a lot of mineral properties, Minister Sarma had told reporters.

Brahmaputra originates in Tibet where it is called Yarlung Tsangpo and is known as Siang in Arunachal Pradesh before it enters Assam and flows southwards to the sea through Bangladesh.

In 2016, China had declared that it would be building a dam on a tributary of the river, sparking concerns of its potential downstream impact in India. There have also been reports of the Siang river in Arunachal Pradesh turning muddy along with its water level receding rapidly.