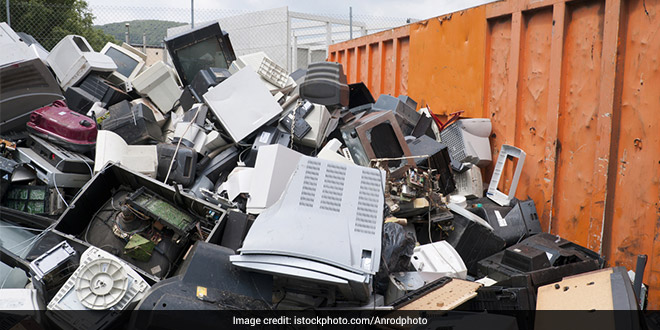 New Delhi: 20 million tonnes. That is the astounding number of electronic waste produced in India every year, ranking the country fifth in the list of global e-waste producers. India’s tryst with electronic waste keeps getting more complicated as the recent guidelines by the Ministry of Environment further changes the guidelines manufacturers are to follow when dealing with e-waste.  The Ministry, which in 2016 introduced the E-Waste (Management) Rules and gave manufacturers till 2023 to turn over 70 per cent of manufactured e-waste, has now retained the timeline but reduced the amount to be turned over to 10 per cent. Instead of the initially projected 6,00,000 metric tonnes to be collected by the end of 2018, less than 1,00,000 tonnes will be collected.

The guidelines, issued in the last week of March, again pose a big problem for e-waste collection and recycling in India as this is the second time such a change in collection percentages has been proposed. In November 2017, the Ministry of Environment had reduced the e-waste collection target from 70 per cent to 30 per cent, denting the possibility of collection of more than 6,00,000 metric tonnes of e-waste by the end of 2018. The gradual lessening in the amount of waste to be collected is defeating the whole purpose of e-waste collection, say experts.

India Environmental Portal, a research think tank which has tracked the growth of e-waste in India says that the decision to reduce the target is alarming.

Despite nearing two years of its existence, the implementation of E-Waste (Management) Rules remains in disarray, signaling no improvement in e-waste handling or management . Despite being hailed as a major reform from the earlier rules of 2011, the 2016 rules are yet to showcase any significant development towards collecting and recycling e-waste. Only 27,000 metric tonnes of e-waste have been collected till 2017, a figure not very optimistic considering India’s e-waste volume is projected to go up to 50 million metric tonnes in 2020.

But manufacturers have their own problems and have repeatedly said that the unorganised nature of the e-waste sector makes compliance with the rules difficult. A delegation of manufacturers from some of leading electronic companies had met NASSCOM (National Association of Software and Services Companies) representatives in December 2017. The discussion took place on how consumers and dealers do not hand over products after their shell life is over. Dealers especially often use parts from electronic items for reuse and hence are reluctant to handover old items to manufacturers.

Since more than 90 per cent e-waste is still in the informal sector, bringing it out it the toughest challenge manufacturers face, said Shrikant Sinha, CEO, NASSCOM.

Amidst such a situation, reduction of targets will make manufacturers even more reluctant to collect and send e-waste for recycling, feel several experts. Instead of reducing targets, the government must try to move e-waste from the unorganised sector to the organised one, feel e-waste experts.

There is no reason why targets should be reduced. If needed, consumers and dealers should be encouraged to hand over e-waste and methods like tax rebates and distinctions could come in handy. Reducing targets will make manufacturers more lax about meeting them, said Satish Sinha, Associate Director of the NGO Toxics Link.

For Violating Pollution Norms In The National Capital, Over 7,000 Buses Booked By Transport Department