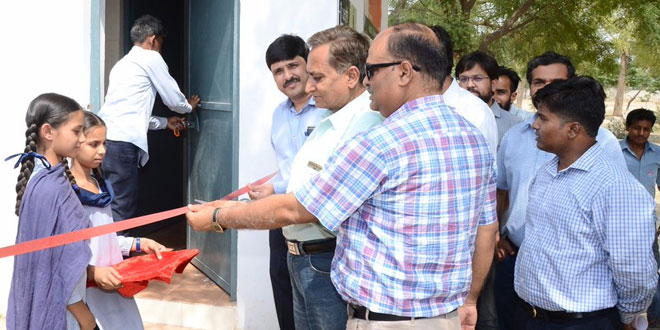 New Delhi: In Punjab the Bathinda municipal corporation plans to reach out to a staggering 145 schools and its students to ensure the building of toilets at homes of those who do not have toilets yet. The plan, as prepared by Municipal Corporation Bathinda (MCB), will rope in 105 private schools, 35 government schools and five corporation aided schools.

Students from standards four to twelve will be handed out forms specially prepared by the municipal corporation. These forms will have sections which will require the parents of the students to declare whether they have a functional toilet at home. Other sections in the form will ask questions on water supply, maintenance of household toilets. The forms are to be filled up by the students’ wards and submitted to school authorities. In addition to students, schools also have to declare the toilet facilities available inside their premises and how well maintained these are. The MCB is confident of completing the whole exercise by January 2018.

The forms, once submitted by the students will be collected from the schools by MCB officials and thoroughly scrutinised to see which households need immediate attention in terms of toilets. The households not having toilets at all will be prioritised, while additional problems like water supply, lack of funds to construct a toilet etc. will be gradually taken up by the municipality.

For the moment, our priority is to identify households which have no toilets. We will assist them to construct household toilets. For households which have toilets but no regular water supply, a team will be formed to identify these post the assessment of the forms and we will begin the laying of new drainage systems to ensure that each household with toilet is provided with continuous water supply, said Mr Singh.

Out of Bathinda’s 50 wards, 20 have already been declared open defecation free. The MCB is hopeful that by the end of 2018, the rest of the 30 wards will also become ODF. However, the municipal body wants to go beyond the ODF tag, and ensure every household has a functional toilet and continuous water supply.

We want Bathinda to be wholly ODF with every household having a toilet. Our campaign involving schools ensures that school students, parents and teachers realise the importance of toilets. This way, we are also spreading awareness on safe sanitation among the next generation, said Mr Singh.

Bathinda ranked a moderately low 132 among 434 cities in Swachh Survekshan 2017. The initiative involving school students is aimed at increasing awareness about sanitation and hygiene among Bathinda’s residents and eventually leads the city to a better rank in the upcoming Swachh Survekshan.