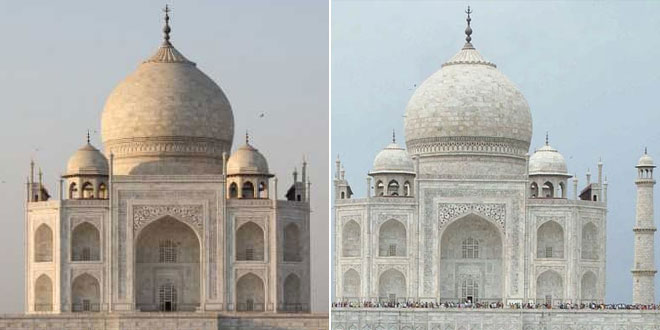 New Delhi: India’s iconic Taj Mahal is changing colours due to air pollution – the monument had earlier turned yellow and is now going brownish and greenish in colour. The Supreme Court on Tuesday pulled up the authorities for not taking appropriate steps to preserve and protect the pristine glory of the ancient monument at Agra. The apex court said, “Taj Mahal and the way it is changing colours due to Air Pollution is becoming the eighth wonder of the world. And, the authorities don’t care.” The court instructed the national and Uttar Pradesh state governments to bring in world experts to help preserve the country’s 17th-century white marble mausoleum.

It seems you are helpless. Please think about it. Money is not a problem. This problem requires some expertise. Get them and assess the damage and then take notes on how to restore it.

Also Read: Shortlisted To Be A Swachh Iconic Place, Here’s How Taj Mahal Fares So Far

Previously, in an attempt to save the monument, the government had closed thousands of nearby factories but the action has not stopped the discoloration.

The World Health Organisation (WHO) global air pollution report has also highlighted the air pollution problems in the city. According to the report, 14 Indian cities are among the top 20 most polluted cities in the world in terms of PM2.5 levels, Agra is one of them.
The Supreme Court justices have given authorities a week to respond. The next hearing of the case has been set for May 9.

Sewage Treatment In Top 10 Sewage Generating Cities On Ganga Banks To Be Doubled By 2021, Says National Mission For Clean Ganga