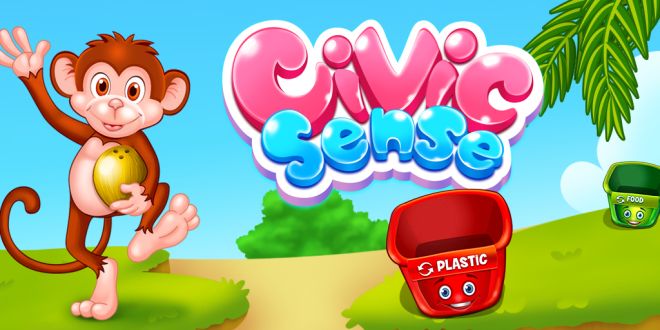 Toddlers take to smartphones and tablets more than toys these days or atleast the start young and have access to gadgets and adapt to them faster than the earlier generations. That is the trend that three men from Karnataka’s capital Bengaluru wanted to capitalise on. Realising that today’s toddlers will be tomorrow’s agents of change, these men conceptualised and developed a game to raise awareness about India’s mounting problem of waste and lack of its management. The game aims to bring about a mass behavioral change among people, especially children. Coinciding with centre’s ambitious project Swachh Bharat Abhiyan, the game is titled, ‘Civic Sense’.

In 2015 when a local panchayat distributed colour coded bins in the area, 36-year-old Sidharth Reddy noticed the lack of awareness that hampered the entire exercise of waste segregation.

I saw people making errors, getting confused between dry and wet garbage and eventually ending up discarding the trash in wrong bins. It was then that I realised how important education and awareness is, in order to curb our existing garbage crisis.

While the government was conducting several awareness rallies, workshops and sessions across the country, Sidharth wondered if there was a different and unique approach to grab the attention of the masses. Thus was born the idea of introducing a game that would make learning of waste management not only educative but also fun. Impressed by the noble idea, Suresh Bhimavarapu and Ashwin Kumar S, Sidharth’s friends, immediately got on board and within two years the game was released. 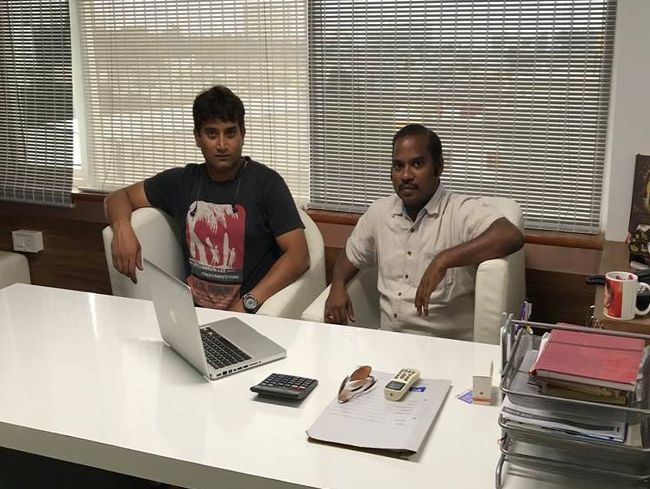 The game is designed to be at par with international standards. The three of them first studied models of waste management followed in countries like Australia, USA, France and Italy. After doing an intensive research, the team built a game with a three-bin system followed in other countries.

As the Solid Waste Management Rules 2016 was only introduced much later after we built our game, the functions of the game aren’t India specific. This game goes beyond just the segregation of dry and wet waste. A player has to segregate other types of wastes like plastic, paper, organic, medical and electronic to earn points, says Ashwin.

A Fun Game With A Touch Of Education 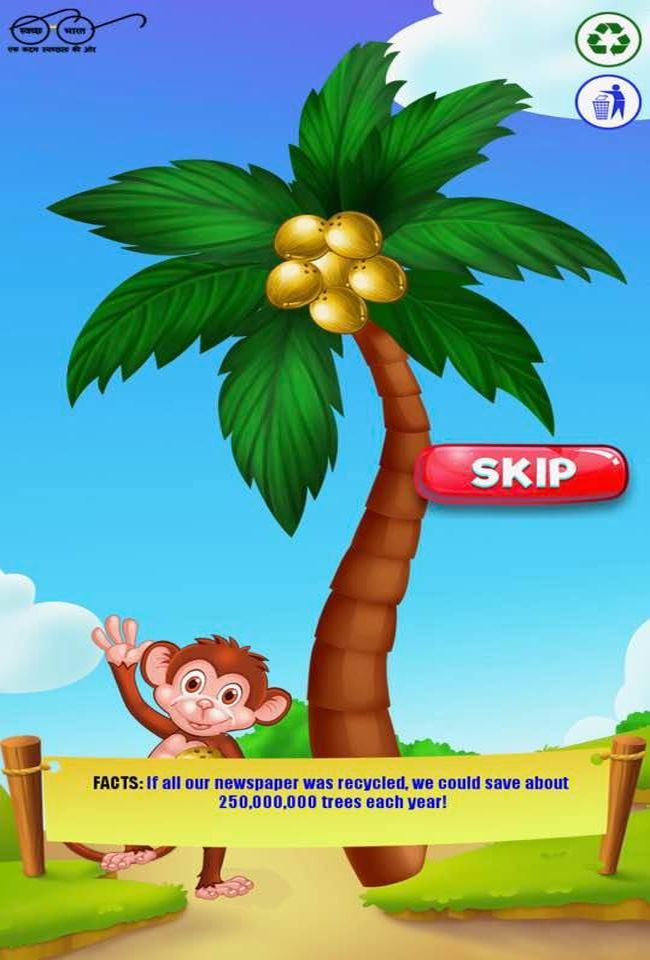 Once you hit the open button, a monkey holding a coconut welcomes you.  Several monkeys, then start to dispatch waste items like plastic wastes, paper wastes and even food wastes through three conveyor belts. A player has to first segregate the waste by swiping different waste items onto their corresponding conveyor belts thus ensuring the each waste ends up in their designated bins. As the levels progress, other trash items including bombs, monsters and brick walls turn up. 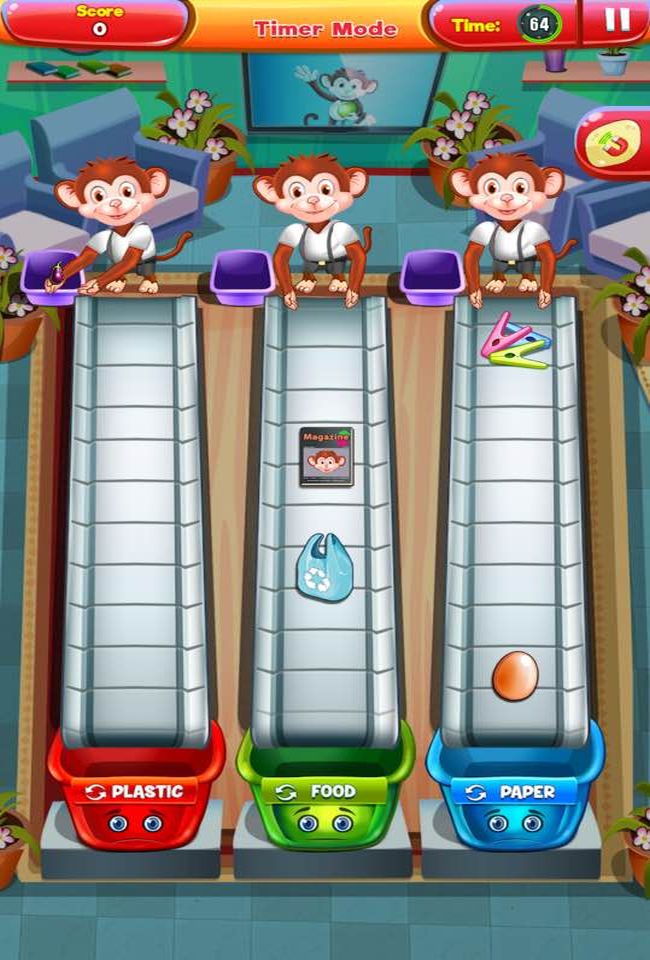 The game has also clubbed the hygiene aspect of cleanliness as the victory of the player is determined by the degree of ‘health bin’. If the health bin goes unhygienic, the player loses the game and inorder to unlock higher levels the bin has to be healthy.

Once the level is completed the player can go back and view details of the game played thus getting an opportunity to learn. The game also gives out stark facts and figures about the garbage crisis. The lush coconut trees bring color to the backdrop and sway as the music plays. 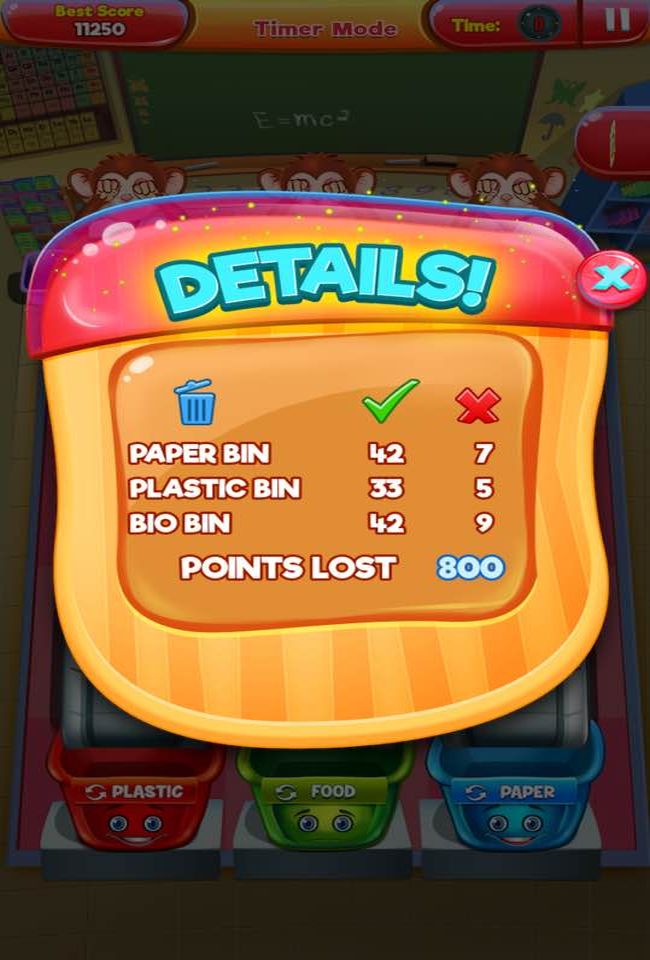 The issue of garbage disposal is not only restricted to the houses. People often tend to ignore the rules they apply at home. Hence, the game gives an overarching scenario of the places we frequently visit, adds Sidharth. 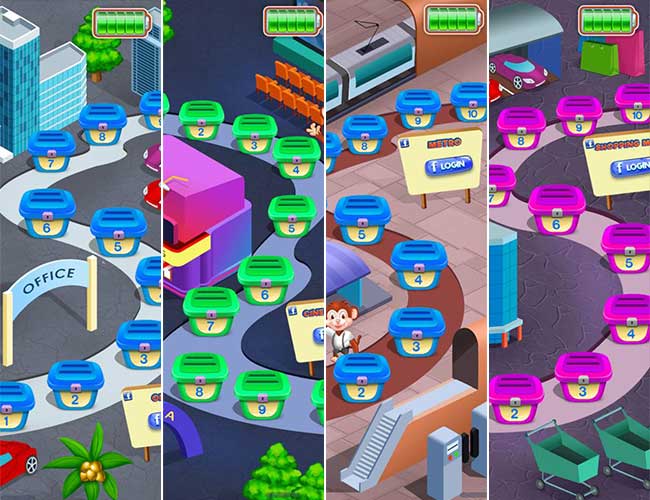 During the testing of the levels of this Swachh game, the team collaborated with an NGO from Delhi who visited to 2-3 local schools. Around 15-20 kids participated in the game and once they completed all levels of the game they were observed for some days. Most of the participants were influenced by the game and executed the aspects of waste segregation in their day-to-day lives, concluded the NGO. The game is available on iOS and Android platforms and one can download it for free.

When asked what were the challenges faced while developing the game, one of the founder says,

Oh plenty! The content needed to be perfect. The different types of wastes, its graphical representation, onto which bin the waste had to be disposed, how the game can be engaging specially to kids as education starts back young, what are the international SWM rules and how can we paint a MVP picture for our idea among many more. Ours is a bootstrapped idea. Hence, as a startup meeting the financial ends is a huge challenge in itself.

Gaming Plans In The Near Future

After receiving a decent response from smartphone users, (in six months, there were 5000 plus downloads by iOS users and 1000 downloads by android phones) the team is in the process of coming up with an Indian version of the game that will essentially deal with 2-bin system. Impressed by the game which is available in 197 countries, the team has also got inquiries from Italian and Chinese companies.

In coming 3-4 months, the team will engage in aggressive B2B marketing. Under this strategy they plan to collaborate with hotels, apartments, amusement parks and use this game as an education tool by providing training to the employees.

Also Read: Trashonomics, A Book That Teaches Children How To Turn Waste Into Wealth