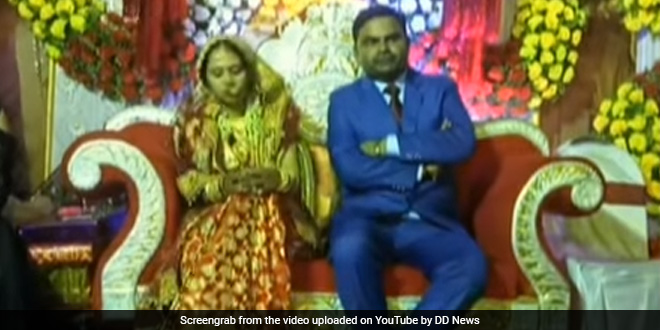 New Delhi: ‘We wanted to begin our new life on a swachh note,’ with this as their motto, Aarti and Om Prakash from Bihar’s Vaishali district decided to turn their wedding into an inspirational one which caters to the ideals of Swachh Bharat Abhiyan. What they did was simple, when everyone was busy enjoying the food and the wedding, the couple decided to pick up the brooms and clean the mess themselves. Their motto was simple – to inspire others to take up cleanliness mission seriously and make sure their nearby areas stay clean just like their homes.

Talking to the reporters of Doordarshan, Om Prakash said,

We had mutually decided to spread the message of swachhta in our marriage. Through our act, we wanted to bring in the behavioural change among people of Bihar and inspire them to take up Swachh Bharat Mission to greater heights by keeping their surroundings clean.

This is not the first time when wedding ceremonies have been linked with Swachh Bharat Abhiyan in Bihar, last year, a couple from Purnia district tied the knots by taking 8 pheras instead of the traditional 7, to promote cleanliness and support the mega drive of Clean India by 2019.

From Bihar To Other Parts Of India: How Weddings Are Going Green

In India’s cleanest city Indore, the municipal corporation gifts two dustbins as wedding gifts to the couples who are getting married in group weddings organised by the civic body under the Mukhyamantri Kanyadan Yojna. Along with this, the couples tying the knots are asked to take 8 pheras instead of the traditional 7, to promote the message of clean Indore.

Similarly, in Kerala, mostly all wedding ceremonies follow a special green-protocol that means the wedding takes place with minimal waste generation and usage of disposable plastics. This initiative has been taken by the state government to make the auspicious occasions more nature-friendly.

Taking a step ahead, Kolad panchayat in Kannur district has started an initiative ‘Maalinyamillatha Mangalyam’ which translates to no-waste weddings, under which a fine of Rs 10,000 on organisers will be implemented if they do not inform the panchayat of an event which caters to more than 100 guests. Another rule highlights that a marriage certificate will be handed to the groom and bride only when the panchayat has monitored that the green protocol has been followed during the wedding.

The target for Bihar to achieve open defecation free status has been set for October 2, 2019.

Punjab’s Beas Water Pollution Not Just Killed Countless Fish But Also Affected Its Ecosystem, Which Would Take Years To Recover