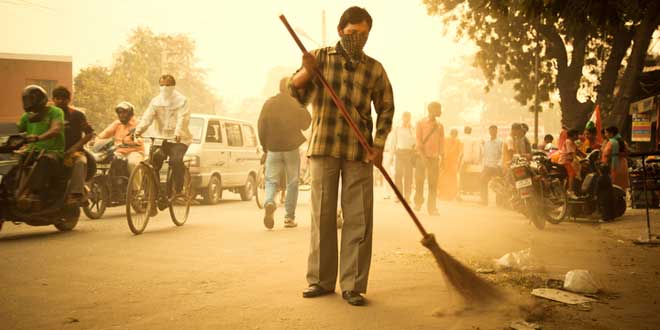 New Delhi: If there is something to throw then just throw it around that has been the practice in Ukkadam, Coimbatore’s vegetable market. All fruits and vegetable vendors would litter their surroundings without any qualms. But this week things changed. 46-year old Ramakanth Raj, a fruit vendor at the market, says it’s been four days since he has stopped discarding his waste on the road. He is not alone, along with Ramakanth, all other fruit and vegetable vendors are being extra cautious about the usual littering problem in one of the largest markets of the city. Like this wholesale market, city’s hospitals, hotels, markets, resident welfare associations (RWAs) and schools are also minding their litter. All this thanks to Coimbatore Municipal Corporation’s (CMC) latest initiative of ranking institutes based on how well they are implementing the principles of Swachh Bharat Abhiyan.

Ahead of nationwide Swachh Survekshan which will begin from January 4 next year, Tamil Nadu’s top performer city is conducting an internal cleanliness survey to enhance the swachhta quotient in various parts of the city.

The city not only managed to retain but also climbed up in the urban sanitation ranking. This shows that we have the potential, will, necessary resources and infrastructure to gain the number one spot in coming years ahead, says an official from CMC.

In the previous Swachh Survekshans, Coimbatore city, with a population of one million, has shown an exceptional performance. Coimbatore was ranked 18 in 2016 out of 76 cities surveyed. In 2017 the number of cities surveyed increased by six times, and despite the added competition, Coimbatore’s rank jumped up two spots.

Last year Coimbatore was ranked at 16 out of 434 cities which is certainly a good position. This year we want to improve our ranking and hopefully feature in top 10 clean cities. The national cleanliness survey is basically an opportunity given to us to improve our city’s sanitation standards. While the 2017 nationwide survey made everyone aware of swachhta, our internal survey aims to make everyone a key contributor in next year’s Swachh Survekshan, explains the official.

The sub-parameters will differ depending upon the nature of the organisation being ranked. For instance, waste segregation will have a higher emphasis in hotels. A restaurant or a RWA treating their wet waste through composting in their premises will be given bonus points. Cleanliness of toilets will have more points in schools, while waste disposal mechanism will be the area of focus in hospitals; garbage lying on roads in market places will attract negative marking and so on.

On December 7, corporation’s health and sanitation department circulated notices to all the hospitals, hotels, markets, RWAs and schools asking them to fill out the application forms. In the form every stakeholder will have to explain the approach taken to ensure cleanliness and hygienic surroundings.

The entries will be shortlisted by a team of volunteers who will then carry out a physical inspection. Preference in terms of scoring will be given to unique and innovative steps taken.

Since the survey is a pilot project it is not feasible to allow everyone to participate. Next year we will expand this survey and accommodate everyone – from small shops to high rises. People have shown interest in this survey and there is an element of excitement that we have recorded in last few days, adds the official.

The civic body has roped in NGOs, college students and sanitary workers to form the inspection committee. The volunteers were given training by the CMC on how to conduct the inspections.

Four teams have been formed – school team, hospital team, hotels/RWAs and market team, to judge their respective segments and rank them accordingly. In the next 10 days, the teams will carry out inspections and the results are expected to be announced by December 25. The winners will be given prizes and all the participants will be given certificates.