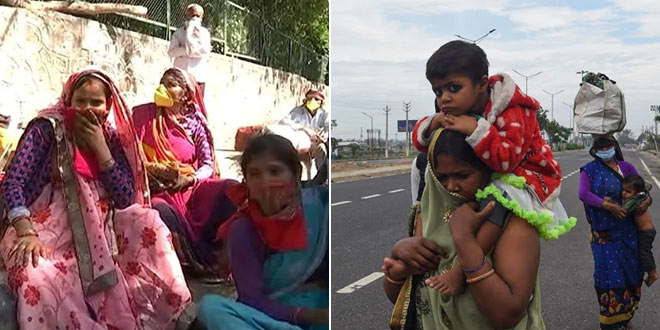 New Delhi: The central government has filed a status report listing out the measures it has taken to control and fight the COVID-19 pandemic in response to a public interest litigation (PIL) filed in the Supreme Court. The PIL sought information from the government regarding the steps taken to provide food, water and shelter to migrant workers during the lockdown. The submission was made by Home Secretary Ajay Kumar Bhalla which said that the central government has taken proactive and timely policy measures to take care of the needs of the people affected by coronavirus and the lockdown imposed to contain its spread.

Explaining the need for a 21-day nationwide lockdown, which was announced on March 24, the report said,

Social distancing is a major intervention to break the chain of transmission of the virus. However, in a country like India which is densely populated, it is very difficult to effectively use the voluntary social distancing as the only preventive measure. Considering the total incubation period of COVID-19, it was found medically desirable and advisable to declare a nationAL lockdown to ensure complete social distancing.

While the government said that the decision of lockdown was taken after detailed and careful deliberations, it also cited ‘misinformation’ and fake news as the reason behind the exodus of more than 6 lakh migrant workers from various cities.

The government has also expressed concern saying that the sudden large scale movement of the migrant worker has the potential to spread coronavirus to the rural population, which have so far largely remained untouched by the epidemic, according to the government.

Commenting on the government’s status report, Harsh Mander, social activist and Director of the Centre for Equity Studies, a research organisation based in New Delhi said to NDTV,

The situation on the ground is quite vulnerable and the report submitted by the centre does not reflect that. Those of us in the formal sector have been assured of our salaries, but a large number of people in the informal sector who have lost their daily wages, have nothing to fall back on. These people are suffering from hunger and desperation. There is nowhere for them to go and benefits promised by the government is too little, too late and too limited, as only those women who have a bank account under Pradhan Mantri Jan-Dhan Yojana (PMJDY), men who are registered construction workers, pensions holders and ration cardholders will be able to get some benefits.

According to the Ministry of Finance, as on April 1, the total number of beneficiaries under the PMJDY is 38.08 crore out of which 20.6 crore are women.  The Department of Food and Public Distribution data reveals that there are 23.8 crore ration cards in the country covering about 80 crore people under Targeted Public Distribution System (TPDS).

Also Read: Is Punjab Moving Towards Community Transmission Of Coronavirus? 27 COVID-19 Patients Have No Travel History

In its report, the central government has stated that it was fully mindful that during the period of the lockdown, no citizen should be deprived of basic amenities like food, drinking water and medication. To address this, it came out with a financial package called ‘Pradhan Mantri Garib Kalyan Yojna’ with a total sum of Rs. 1.70 lakh crores.

The package includes providing five kilograms of food grains (rice and wheat) and one kg of pulses free of cost every month for the next three months from the central government through state governments and UTs.

However, Anjali Bharadwaj of the Right to Food Campaign, a people’s initiative for monitoring the implementation of the National Food Security Act,

The amount of ration promised by the centre is in addition to the ration already being received by the ration cardholders who include only those who are eligible under Antodaya Anna Yojna (AAY) and are Priority Households (PHH). The daily wagers who are APL (Above Poverty Line) or do not have ration cards will not be given any food support.

She further said that her team visited 31 ration shops in Delhi. They found that arrangements have been made by the Delhi government to provide the enhanced amount of 5 kgs promised by the centre and 2.5 kg promised by Delhi CM. Earlier only the ration card holders were being given the foodgrains, but now in Delhi, the poor and needy can get foodgrains by presenting their Adhaar Cards if they do not have a ration card, she said.

Also Read: Myths About Coronavirus: From 5G Network To Exposure To High Temperature, Here Are Some COVID-19 Mythbusters From WHO

The promised package also says that 20.4 crore women who are Pradhan Mantri Jan Dhan account holders will be getting an amount of Rs. 500 per month for the next three months. 3.5 crore registered construction workers will be given financial assistance through ‘Welfare Fund for Building and Other Construction Workers’.

Mr. Mander asserted that it is yet to be seen how the cash transfers are implemented. He said,

We are yet to see the transfer to financial benefits but even if the transfer happens, the amount is too less. Rs. 500 is equivalent to their 2-3 days’ wages only. If we talk about benefits to construction workers, only a fraction of them are registered. They don’t work with one contractor, they sometimes do multiple jobs.

According to the status report, initially, some state governments made arrangement for the travel of the migrant workers but eventually a decision was taken by the centre to not permit further movement. Thus the migrant workers are required to stay wherever they have reached. Shelter, food and medical facilities will be provided to them while observing social distance norms, said the report.

The status report states that 21,064 relief camps have been set up by state governments and union territories across the country on the direction of the central government in which around 6.6 lakh stranded persons have been provided shelter.

According to the status report, country’s testing capacity for COVID-19 has been enhanced substantially. From a single laboratory in January 2020 in Pune to 118 government labs and 47 private laboratory chains that have more than 20,000 collection centres across the country.

Funds under ‘National Health Mission’ and ‘State Disaster Response Fund’ are being roped in for upgrading medical facilities like quarantine, hospital infrastructure and for procurement of personal protection equipment (PPEs), ventilators and N-95 masks.

The centre has also issued an order for the purchase of 40,000 ventilators.

The government submitted that various awareness generation initiatives are being undertaken to make people aware about hand-hygiene and cleanliness as a major preventive strategy and a slew of Dos and Don’ts have been circulated widely through multiple methods.

Dr. Meenakshi Jain, Associate Director, Internal Medicine, Max Healthcare, Patparganj and Noida, the main challenge in India is to strengthen the public health system which means that all public and private medical facilities need to come together in the fight against COVID-19. She further said that is difficult to ascertain the number of required ventilators and other equipments but added that the country needs to tap its domestic manufacturing and industrial for fulfilling the shortage of required medical machines.

Dr Arvind Kumar, Chairman, Center for Chest Surgery and Director, Institute of Robotic Surgery at Sir Ganga Ram Hospital (SGRH), Founder & Managing Trustee, Lung Care Foundation said to NDTV that lockdown has given India a crucial time to prepare for healthcare facilities in two areas – one is the infrastructure and other is the manpower. He said,

Government of India has already said that they already have orders ventilators and are trying to get more. Also, modifications are being made where one ventilator is being connected to two or maybe four people. Large numbers of hospitals are being set up with dedicated ICU beds to fight the pandemic. This is one part, the next part is where India needs to train nurses, support staff or doctors to manage COVID-19 patients as these are very sick people who need to be taken care of in a specialised manner. With this lockdown, India will be more prepared to fight coronavirus and it will also reduce the mortality rate in the country, unlike what has happened in Italy and other countries.

‘Indians Know How To Do It’, Says WHO Special Envoy Appreciating India’s Quick Response To COVID-19