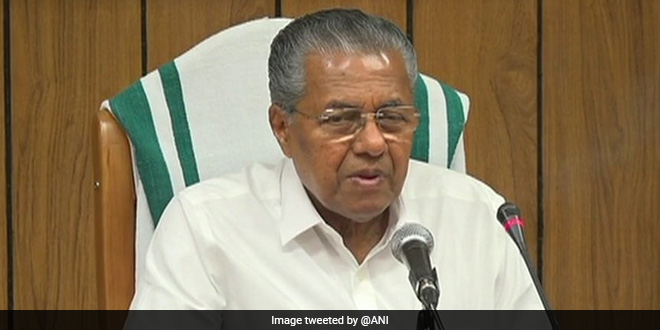 Thiruvananthapuram: Lauding his government’s efforts to contain the pandemic, Kerala Chief Minister Pinarayi Vijayan on Tuesday (October 6) reaffirmed that the COVID-19 situation in the state was better than the national average. “Although COVID was first reported in Kerala in the country, we have been able to contain the spread on a large scale as a result of the caution exercised by both the government and the people. Despite the increase in the cases in the last few days, we are still in a better position compared to the national average,” said Mr. Vijayan.

The tests per million in Kerala are 92,788 as against the national figure of 77,054. There are 99 per million at the national level while in Kerala, it is 24.5. The state has a case fatality rate of only 0.36 per cent as compared to the national average of 1.55 per cent. The test positivity rate in Kerala is 7.2 per cent as against 8.3 per cent nationally. So if we look at the figures, we can see that the vigilance and steps taken so far have not been in vain. Therefore, they must be taken forward more vigorously, Mr. Vijayan said.

Amid rise in coronavirus patients in the state, government is expediting the process of identifying and isolating possible patients in all districts and at the same time proposes to tighten the COVID-19 restrictions in public places.

A total of 111 health workers were found coronavirus positive out of 7,871 newly reported cases. In the last 24 hours, 4,981 people recovered taking the state’s total recovery to 87,738. A total of 25 deaths were also reported from the state.