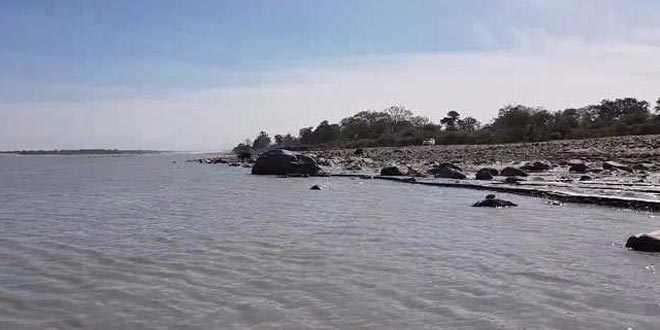 New Delhi: Brahmaputra river, locally known as Siang river in Arunachal Pradesh is causing worry among locals. Water of Siang river, which originates in Southern Tibet and becomes the Brahmaputra upon entering Assam through Arunachal Pradesh, is turning black and muddy and no one knows why. Locals who have been trying to find the answer since last two months are not only clueless but also helpless. Worried, both the Assam and Arunachal Pradesh government have started conducting tests and the results shows the increase in levels of turbidity.

The high content of Nephelometric Turbidity Unit (NTU) has not only made the water unfit for human consumption but also led to loss of aquatic life. Based on water sample collected on November 27, the report said that NTU caused by concentration of suspended or dissolved particulate materials in the river water is 425, whereas the permissible limit ranges from 0-5 NTU.

Normally, at this time of the year, Siang’s river is crystal blue, but for the past two months the water has been muddy and turbid. An 82-year-old retired government employee, Kakut Tayeng has lived by the blue waters of Siang river in Arunachal Pradesh all his life. Today he is worried about his state and the river. He says,

Earlier the river used to be very beautiful. There were many fishes around. We have never seen Siang like this in winters.

The question that arises now is that what has led to the sad state of Siang river? There are two theories-

1. China’s plan to build a tunnel to divert water from the Yarlung Tsangpo in Southern Tibet to the parched Taklamakan desert area. Some allege that there is a lot of cement that has mixed with the water.

China is still denying that no we are not doing anything. I am really worried and wonder about the central government. Are they really thinking about the north east, says Ninong Ering, Member of Parliament, Arunachal Pradesh.

Mr Ering has also written a letter to the Prime Minister requesting him to take up the matter with Chinese government, but he is yet to get a response.

2. After effects of the recent strong intensity earthquake in Tibet measuring 6.9 on Richter scale.

The effects of change in quality of water are so bad that aquatic life has come down to zero. P Ringu, Wildlife and biodiversity expert says,

I am not able to see the fishermen here. Aquatic life has gone. It has directly affected birds which used to come to the Ering sanctuary.

We worship nature so naturally we are very sad. We are saying this with a heavy heart that we are in trouble from two months, says Yalem Tara Burang, Activist.

To Spread The Message Of Environment Protection, Chief Minister Manohar Parrikar Rides A Bicycle At NoMoZo