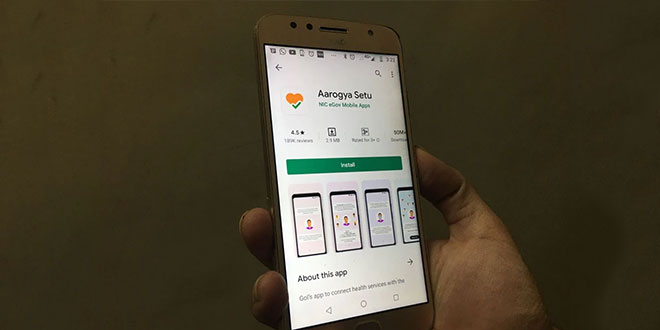 New Delhi: The contact tracing app for smartphones launched by the Government in early April now has a new version that will make it accessible to more people. The Aarogya Setu mobile application will now be available to people with feature phones as well as landline phones. On May 6, the government introduced Aarogya Setu Interactive Voice Response System (IVRS), a toll-free service through which a feature phone or landline user can take the self-assessment test for coronavirus by giving a missed call on 1921. Like the smartphone app version, similar questions are asked via IVRS service, to assess the chances of the user contracting COVID-19 and need for testing, based on the answers given about symptoms, travel history and other details.

The input provided by the citizen will be made part of Aarogya Setu database and information is processed to send alerts to the citizen on the action to be taken to ensure their safety, reads the official statement.

How Does Aarogya Setu IVRS Work?

Available in 11 regional languages, the IVRS service works on the principle of a missed call received on 1921 following which a user is contacted and requested for information regarding his/her health. The IVRS call begins with a pre-recorded message in actor Ajay Devgn’s voice asking people to not hide any information related to their health and answer all the questions in full honesty.

Following this, questions like, gender; age; history of existing diseases like diabetes, lung and heart disease and so on are sought; and then information about if the caller has interacted or lived or is living with a COVID-19 patient is asked. Post the call, based on the responses, a user receives an SMS stating the results like ‘you are safe’ or ‘your infection risk is low’ indicating the health status and the action needed. The message asks the user to either stay at home and avoid any chance of exposure or consult a doctor.

Apart from risk assessment, the other important functionality of Aarogya Setu mobile app is contact tracing. If someone with the app tests coronavirus positive, then all the phones that came in close range of the phone of the infected person can be reached out to isolate through quarantine or conduct tests to check the transmission of the virus. The mobile app uses GPS and Bluetooth for locating the other phones that were in the range of the infected person. But for this to work the other phones also need to have the app activated and GPS/Bluetooth on, when outdoors.

The objective of IVRS 1921 is not contact tracing primarily. The service allows people with feature phones who are quite a significant number in our country to give a missed call on a toll free number and take a symptom checker or self-assessment test. The data of people who have any symptoms of COVID-19 are shared with the Ayushman Bharat team following which a team of doctors calls the individual to get more information on the symptoms and the location of the person. If an individual is assessed to be in need ofu80 medical help, the local health authorities are alerted.

Mr Singh very categorically stated that contact tracing and sending alerts to people with feature phones and landlines are not possible. But, the IVRS service can help in identifying COVID-19 patients. Elaborating on the same, Mr Singh said,

We are publicising it and once people get to know about it, they will make more use of it. As and when an individual thinks he/she has symptoms, he/she can simply give a missed call and take the test.

I don’t think coming with a mobile app or IVRS will work. I don’t think it’s a full proof thing. In India, a large population doesn’t have access to any kind of phone and to reach out to them, you would still have to depend on manual contact tracing. Even if people in villages have a phone, it’s not necessary that each member of the house will have a personal phone. Also, a lot of migrants are walking from one place to another and I’m sure COVID-19 cases will reach the rural areas. You can compel people living in urban areas to download a mobile application but you can’t apply the same strategy in rural India. It can give you a false assurance that you have traced everyone but I don’t see much of a utility.

Everything You Need To Know About The Aarogya Setu Mobile App

The Aarogya Setu mobile application is available for both Android and iOS users in 11 regional languages. On registration, the app creates a unique digital ID and all the data related to a user – name, contact number, gender, profession, travel history and other essential information is saved under that digital ID.

The mobile application was launched as a voluntary application by the government but with the coronavirus crisis looming large, on April 29, the central government made it mandatory for its staff to use the app and come to office only when the application indicates a ‘safe’ or ‘low risk’ status.

Later on May 1, while extending the lockdown for two more weeks, the Ministry of Home Affairs in its directive mandated the use of Aarogya Setu mobile app for all employees and residents of containment zones. The directive stated, “Use of Aarogya Setu app shall be made mandatory for all employees, both private and public. It shall be the responsibility of the head of the respective organisations to ensure 100 percent coverage of this app among the employees.”

National Directives for #Covid_19 Management and penalties for violations of #Lockdown3 measures ???? pic.twitter.com/G3WvFj6hjh

The Aarogya Setu application has been downloaded by 9.8 crore people and is now one of the top most downloaded apps. According to Sensor Tower, a smartphone and apps usage analytics firm’s April numbers, the app secured the seventh position in the ‘Top Apps Worldwide for April 2020 by Downloads’ list.

Ever since the app has been launched in the country, experts have raised various privacy concerns over the safety of the user’s data. On April 8, Delhi based Software Freedom Law Centre (SFLC.in) alleged that the app collects sensitive personal data such as a person’s gender and travel information that it stores in the cloud. SFLC raised concerns over collection of personal data and location and stated,

The app primarily collects personal data from user cellphones and cellphones are an immense repository of personal data of users and sometimes, of a user’s contacts and acquaintances. In this scenario, keeping the source code of such an app proprietary is not advisable.

Raising question on the personal data collected and its use, SFLC highlighted the clause 2 (a) of the Privacy Policy and wrote, “This clause enables the Government to share personal information uploaded to the cloud with “such other necessary and relevant persons” in order to “carry out necessary medical and administrative interventions”. This is problematic as the clause is broadly worded allowing the data to be shared with practically anyone that the Government wants.”

The Internet Freedom Foundation (IFF) released a paper titled, ‘Privacy prescriptions for technology interventions on COVID-19 in India’ under which the author highlighted the lack of transparency in Aarogya Setu app and raised questions on the collection and use of GPS trails and Bluetooth proximity interactions.

Recently, a French security researcher Robert Baptiste, who goes by pseudonym Elliot Alderson, said that a ‘security issue’ has been found in Aarogya Setu App and the privacy of 90 million Indians is at stake. After this, team Aarogya Setu had put out a statement on the data security of the app and stated that the data is secure.

Statement from Team #AarogyaSetu on data security of the App. pic.twitter.com/JS9ow82Hom

On the contrary, according to Elliot Alderson, some of the issues in the app have been fixed but the app doesn’t care about user privacy. This is the reason the hacker has been continuously asking the Aarogya Setu team to put the source code of the app in public.

Also Read: From 100 To 1 Lakh COVID-19 Cases In 64 Days, India Ahead Of USA, UK In Slowing Down Infection Spread

According to Union Minister Ravi Shankar Prasad, the app is safe and secure.

The data is in an encrypted form. Most important, it is for the safety of Indians and in the public interest because it cautions you in the event there is a COVID-infected person in your vicinity. It is a very robust invention of technology and many other countries are using similar applications to fight COVID-19. And the second most important point is that the data is limited. Routine data remains for 30 days and in the event you are infected, then for 45 to 60 days. Then automatically it will vanish, Mr Prasad was quoted saying by Press Trust of India, a news agency.

Sharing his views on the privacy concern in regard to the mobile app, Mr Singh called it 100 per cent safe, in fact, safer than other commonly used mobile applications like WhatsApp. Talking about collecting the data on the mobile app and IVRS service, Mr Singh said,

Contact data will be pushed to the server only if you are tested positive and we need to do this to alert those who might have come in contact with you. In the case of IVRS, we don’t take any personal information like your name. We just have your number and the symptoms.

From Farhan Akhtar To Salman Khan And Shahrukh Khan, Bollywood Is Helping In The Fight Against COVID-19