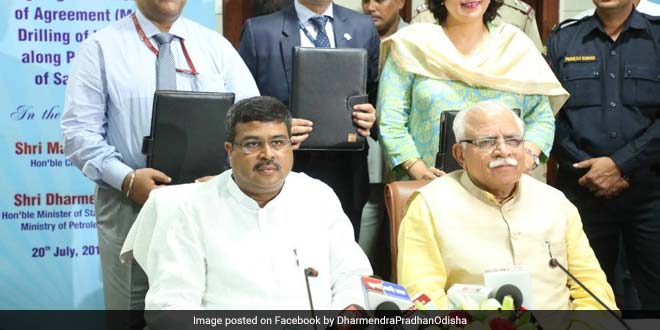 As the plight of rivers Ganga and Yamuna keep increasing, India’s not so well-known rivers are at no better state. With rapid urbanisation and industrialization, rivers small and big in India have been over exploited and polluted to such an extent that the situation is quickly getting out of hand. Amidst the row between Centre and state governments and courts and tribunals, smaller rivers are not getting the required conservation attention. The Saraswati River which flows through Haryana and Uttar Pradesh is one such relatively nondescript river, which is suffering from depleted water levels and inferior water quality due to pollution. After years of negligence, the state government has decided to give some attention and focus to the Saraswati river

The river’s dire state in two states has resulted in vast stretches of the river becoming waterless. Whatever water the river receives during the monsoon is utilised by the inhabitants on the banks of the river, resulting in the river not retaining any water during the other seasons. Among one of the recent measures taken by the Haryana state government, the signing of a Memorandum of Agreement (MoA) between the state government of Haryana and Oil and Natural Gas Corporation (ONGC). The agreement states the cooperation between the state government and ONGC to drill 10 water wells along the river’s petro channel. The river, along its course has a stretch of 135 kilometres with petroleum deposits. ONGC will focus on that particular stretch to dig 10 water wells. Each of these wells would go till a depth of 400 to 500 metres so that water could be provided to drought prone areas. The water obtained from the wells will be redirected to the river, rejuvenating it in the process.

The MoA signed today, besides increasing the availability of water in the region will also help in restoring the lost glory of Saraswati River, tweeted Dharmendra Pradhan, Minister of State, Petroleum and Natural Gas.

The MoA signed 2day besides increasing the availability of water in the region will also help in restoring the lost glory of Saraswati River pic.twitter.com/2iAlMl4sxg

The Haryana government has also formed a technical committee on how the river could be developed further. The committee, which was formed in June 2017 has been named as the Haryana Saraswati Heritage Development Board (HSHDB) and will be engaged in the restoration of the river. The committee will study old maps of the river and will work on restoration of the river’s flow. Land through which the river used to flow will be secured by the HSHDB and then the government will try and direct the flow of the river, as per the old maps. The plan of setting up a committee to revive the river was given a nod in 2002 by then Prime Minister Atal Bihari Vajpayee, but work has only began in 2017. The Haryana state government has set aside a budget of Rs 50 crore for the Saraswati rejuvenation programme. The state government also plans to build three canals across the river to facilitate better flow of the river’s water.

Focus on a river like Saraswati will actually help Haryana receive more water which can be utilised for the state during prolonged drought periods. The initiative may also set a good example for other states, which can look at restoring smaller rivers and reduce dependencyand pressure on major rivers and freshwater sources.

Also Read: In Pictures: The Mighty River Of India, Ganga Is Dying And We Are To Be Blamed

Related Topics:
Haryana River Clean Up Water Pollution
Up Next

A 32-Year-Old Fight: Ganga Crusader Mahesh Chandra Mehta’s Quest To Curb Pollution And Save The River