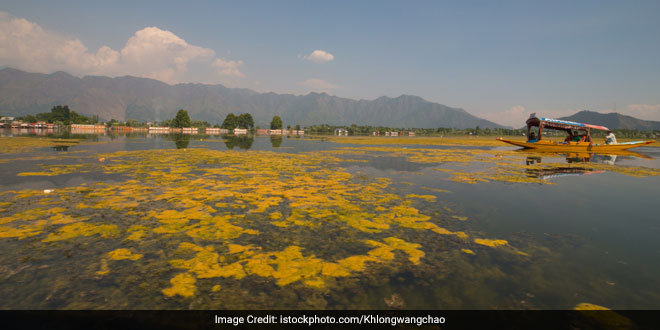 Srinagar: Faced with alarming levels of muck and choking weeds, Dal lake, the main tourist attraction in the Kashmir Valley, is gasping for breath — and the once-pristine waterbody seems to be in dire need of intervention by a specialised global agency to prevent further decay. Despite a separate budget plan and the spending of several crores by successive governments for its conservation, the Dal Lake — once known for its clear, potable water — is currently dying because of the continuous flow of untreated sewage, waste material and wild creepers that are together destroying the area’s ecosystem.

“We need a specialised agency to tackle the problem and to prevent the lake from dying. The existing local agency, with its conventional cleaning methods, has failed to deliver,” a senior Tourism Department official, who declined to be named, told IANS.

“We have not got any funds under the Swachh Bharat programme. While our annual state capital expenditure on Dal Lake is Rs 80 crore, we have been allocated Rs 356 crore from the Centre for Dal Lake conservation and rehabilitation of dwellers from the lake to outside the area,” said Masoodi Hafeez, Vice Chairman of Lake and Waterways Development Authority.

The Authority, responsible for cleaning and maintenance of the Dal lake, has sought Rs 1,488 crore from the Centre for a holistic project that would involve relocation of dwellers from near the lake and its conservation. Asked about the need for seeking help of a specialised agency from abroad, Hafeez declined to comment.

“There is a need for strong political and bureaucratic will to take up the cleaning issue as the turbulence in the Valley is pushing it to the backburner, with law and order becoming the priority of the government,” said the Tourism Department official.

Acknowledging that Dal is in deplorable condition and in desperate need of a massive cleaning exercise, Minister of State for Tourism Priya Sethi said strong political will is required to prevent its further deterioration. The lake’s area has shrunk to 21 sq km due to encroachments and untreated dirty water being discharged from houseboats and nearby hotels — as well as houses on the shore.

While the lake needs a sewerage treatment plant of 80 million litres capacity daily to keep the water clean, the authorities have so far managed to install a plant that can only treat 36 million litres daily, resulting in massive depletion in water quality. Only 30 per cent of houseboats are connected to the plant, with the rest discharging untreated waste into the lake.

The Travel Agents Association of India (TAAI) recently held its annual convention in Srinagar to attract more tourists to the Valley, which is currently witnessing a decline in footfalls due to the separatist violence in the state. The event, aimed also at changing the perception about the situation here, has returned to the Valley after 31 years, said TAAI President Sunil Kumar.

While the Dal Lake is the central attraction for tourists in Srinagar, about 500,000 local people depend on it for their livelihood.  At present, the Dal is home to about 1,200 houseboats and 4,000 shikaras and pheriwalas, Bashir Ahmed, the caretaker of a houseboat, said. However, official data — which does not take into account unregistered boats — contends there are only 923 houseboats and 2,700 shikaras. There are also some 150 floating shops and 58 hamlets with about 10,000 families staying around the lake. The flow of untreated water and sewage from hotels and houses along the lake is also affecting the aquatic life of the water body.

As for those responsible for the health of the lake, Ahmed said: “Sometime they come to clean, sometimes they don’t.” And the result of this dangerously lackadaisical attitude is there for everybody to see — the Dal Lake is in peril.

Less People Are Defecating In The Open Than Earlier, Says Ministry In Comprehensive Discussion On Swachh Bharat Abhiyan’s Progress