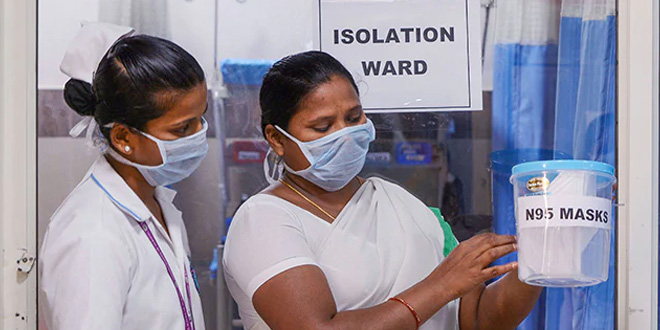 New Delhi: The coronavirus COVID-19 has affected 195 countries and territories around the world and one international conveyance (the Diamond Princess cruise ship harbored in Yokohama, Japan) as on midnight 23 March, 2020. The dangers as well as precautions have been covered adequately by all forms of Government communications/ media/publications as well as social media, hence they are not being repeated. While there is adequate awareness, there is varying degree of seriousness in dealing with it, as many segments of society chose to put individual preferences above potentially the most devastating threat that looms over the country as well as the world.

Also Read: Coronavirus Outbreak: A Complete List Of Places In India Where You Can Get Tested For COVID-19

By March 24, 2020, 18:22 GMT, the worldometer indicated 4,10,465 cases of coronavirus with 18,295 deaths and 1,07,199 recoveries. The WHO puts the morbidity rate at 3.4 per cent, but the biggest danger being faced by mankind is its potential for exponential rise due to community transfers, if measures for isolation/quarantining patients/suspects and community at large, are not implemented properly, along with early detection. The global analysis indicates varying responses and corresponding results, which are necessary to understand the seriousness in adopting the safety measures being communicated by Government agencies through various mediums.

China is accused of doing global damage by hiding crucial timely information for the rest of the world to be able to respond to COVID-19. Wuhan, believed to be the origin and initial epicenter of the disease, was late in quarantining affected people, could not prevent community transfer and the number of affected cases hiked exponentially in the beginning. Although it took harsh measures and has been able to bring down the affected cases, which as per reported figures so far stand at 81,171 with 3,277 deaths, these figures are suspected as the number of mobile users in China vanished in much greater numbers, as per some media reports.

China was quick to declare that it has conquered the disease and reported 73,159 recovered cases, but 78 fresh cases, seven fresh deaths and 4,735 active cases, mitigate the claim. The community lockdowns, and stringent measures of social distancing helped China in flattening the trend. The world, however, will continue to accuse China for this pandemic, with two legal notices already filed against it.

Europe, led by Italy (with 69,176 cases and 6,820 deaths) is another case of taking the disease lightly initially and is trying to control it with all possible measures later. WHO has warned that the US will be the next epicenter of COVID-19 having 50,860 confirmed cases, out of which there are approximately 25,000 cases in New York. The US faces a stalemate over $2 trillion allocation for combating the pandemic. The same is the case with South Korea and Japan. The only advantage these countries enjoy is that they have much less population in comparison to countries like India and relatively better medical capacities per capita population to control.

Iran continues to struggle after the initial carelessness and later with inadequate capacity. It needs to be noted that in most western countries, the testing in terms of percentage of population has been fairly high; hence the magnitude of the problem is better identified.

Taiwan, with 23 million people, just off the coast of China, was predicted to have the second highest “importation risk” by any country, with over 8,50,000 of its citizens residing and working in mainland China and a heavy rush of travelers to and from China, due to the outbreak of COVID-19 coinciding with Chinese New Year.

Considering the risk, having only 199 cases with two deaths and no new cases so far is creditable, notwithstanding the advantage of much lower population to test. Their success is attributed to an early action by the National Health Command Center (NHCC) with a branch focusing on large outbreak responses and acting as a central command post for direct, transparent communications, which was established after the SARS outbreak. Their actions included border control from the air and sea, identifying cases, quarantine of suspicious cases, managing resource allocation, daily press briefings, identifying false information and formulating economic policies to relieve families and businesses. Maximum use of ‘Big Data’ and technology was done to identify travellers, patients and suspects, and quarantining them. The support of the population was another major factor.

Also Read: Coronavirus Outbreak: Here Are The Answers To All Your Frequently Asked Questions On COVID-19

Why India Needs To Get Together Against COVID-19?

India has the second largest population in the world with over 130 billion people. While there is no need to panic with 536 cases identified and ten deaths so far, as a developing country its capacity to isolate communities is the biggest challenge in the world, which cannot be combated without public participation. The numbers identified so far are limited, due to limited testing facilities available in the country, which are being increased gradually. India needs to ensure not to enter into community spread (next stage) of COVID19 outbreak, otherwise the speed of infection will overtake speed of capacity building of the country to handle it. Although a lot is being done by the government and other agencies, the biggest challenge is to convince the segments of the society, who chose to take it lightly, by superimposing personal priorities over public health.

The 21-day lockdown of the whole country announced by the Prime Minister on March 24, 2020, is the right step to break the chain of infection and flatten the upward curve of growing cases in India. India does not have the luxury of manageable population, and is yet to have the full capacity to deal with third stage of the pandemic; hence the best option available is quarantine/social distancing to ensure that it remains in the second stage with flattened curve, for which it has the capacity to handle. The partnership of people as well as private sector for capacity building is required. Going by the example of Taiwan, the data of every citizen with the Government is necessary to counter such emergencies better, sacrificing the politics for or against it, for the sake of Indian population. India needs to take forward the spirit of ‘Janata Curfew’ forward with much more vigour, enthusiasm and discipline.

Coronavirus Outbreak: A Complete List Of Places In India Where You Can Get Tested For COVID-19