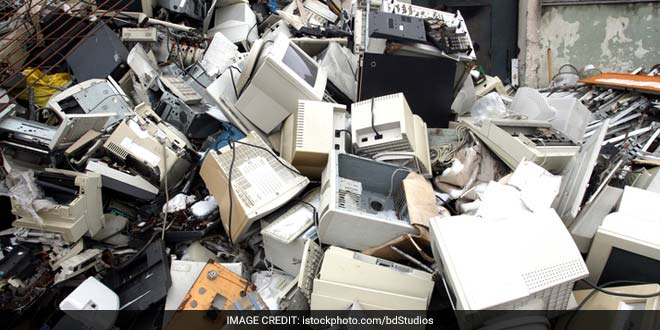 New Delhi: The aim is to manage electronic waste, which predominantly falls under the informal sector. With this aim in mind, the Goa Waste Management Corporation (GWMC) will construct its first e-waste collection centre in Curchorem, South Goa. With an investment of Rs 76 lakh, the new centre will be made in place of the existing plastic collection centre.  Speaking at an event Dominic Fernandes, Officer on Special Duty, Solid Waste Management Department urged citizens to not dispose of their e-wastes with the rest of the garbage and instead focus on ways to return back their electronic items which are way beyond repair.

For the first six months, the goal of GWMC will be to collect all kinds of electronic waste including electronic devices and miscellaneous items like bulbs, tubelights and batteries. The officials will also carry out dialogues with major e-waste generating companies to follow the Extended Producers Responsibility (EPR) under which manufacturers of electronic waste are liable to channelise their dead electronic products either by building collection centres or by implementing the take-back system.

Being one of the smallest states of India, the panchayats and local municipal bodies have been given the responsibility of collecting the urban pollutant from government offices, households and manufacturing companies. Once all the e-waste is collected it will be deported by municipal trucks to the collection centre and once the volume of waste reaches the economic level (the volume at which waste can be sold), it will be scientifically disposed of by handing it to the authorised recycler.

Mr Fernandes said that the GWMC will follow a ‘pay and paid’ rule under which local bodies will have the authority to charge manufacturing companies for collecting their e-wastes. And in some cases the officials will have to pay money to small shops to buy their e-waste.

E-waste being a rather new concept of waste segregation, it will take some time for municipal workers get trained in collecting and maintain a record of this urban pollutant. “To make this (e-waste) a part of waste management, it is vital to give the right kind of training to the waste collectors. Under this project we will conduct awareness programmes across the state to ensure proper segregation,” adds Mr Fernandes.

The e-waste collection centre will be developed under the Digital India initiative and in collaboration with the Ministry of Science and Technology.

Also Read: IT Firm Raises Concern Over E-Waste Generation In Odisha, Says It May Touch 2050 Million Tonnes By 2021