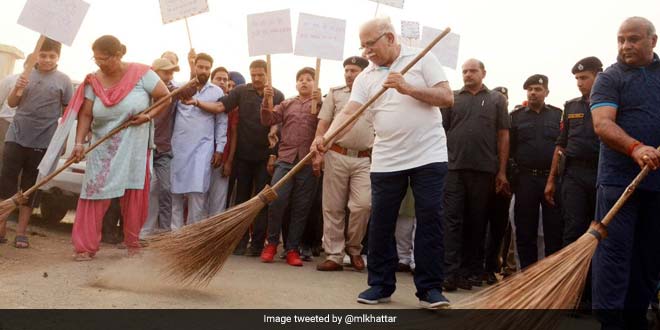 Mumbai: It is not new for Haryana Chief Minister Manhohar Lal Khattar, to pick up the broom to promote the cause of cleanliness. He was last seen with a broom as part of a Safai Abhiyan during Environment Day last year. He picked up the broom again to participate in a cleanliness drive launched in Salaru village in Karnal district on May 1. The chief minister spent a night in the village and reviewed Gram Swaraj Abhiyan programme to check the progress of his government’s schemes in the state.

Cleanliness should be everyone’s first priority. The motivation towards developing a clean and hygienic environment will come only when people whole-heartedly participate in the Swachh Bharat Abhiyan. I appeal everyone to associate themselves with the swachhta mission and make their village, city and state a clean region, the chief minister said while sweeping the roads of Salaru village.

The chief minister also interacted with more than 1,000 villagers living in the tiny hamlet about six kilometres from the Karnal district headquarters on a number of topics. The issues ranged from water scarcity, sanitation, open defecation, waste management, providing better academic opportunities to girls to discussing the problems of farmers.

Haryana is one of the few states where both, urban and rural areas, have been declared open defecation free. The rural areas of the state became ODF in June 2017 and three months later its urban counterpart was declared free from open defecation. To sustain the ODF tag, the authorities immediately initiated a pilot project of ODF plus in several villages of the state. From working towards improving overall sanitation in terms of solid and liquid waste management, sewerage lines, storm water drains to having pucca cement roads, the state is taking several steps to ensure sanitation.

Sewage Treatment In Top 10 Sewage Generating Cities On Ganga Banks To Be Doubled By 2021, Says National Mission For Clean Ganga