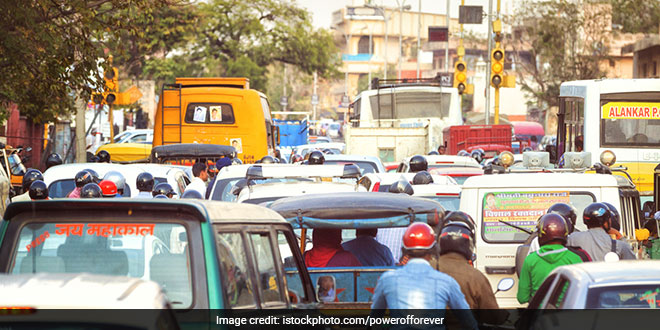 Chandigarh: It may be ranked as one of the country’s cleanest, greenest and best-planned cities, but Chandigarh is facing issues with rising pollution and chaos on the roads, thanks to the highest per capita ownership of motor vehicles.

With a recent report pointing out that Chandigarh has a per capita density of 878 vehicles per 1,000 population, the Union Territory (UT), which is also the joint capital of the states of Punjab and Haryana, is feeling the pinch, with pollution increasing and chaos reigning on the roads.

As per the report, while there are over 358,000 four-wheelers registered in the city, there are nearly 668,000 two-wheelers as well. The city has nearly 4,500 registered buses and over 11,000 goods and other vehicles.

Being a major centre for government, commercial and other activities in the northern region and lying virtually at the centre of three states — Punjab, Haryana and Himachal Pradesh — Chandigarh gets a floating population of over 100,000 vehicles daily.

With the high density of vehicles in the Union Territory of 114 square km, the RSPM (Respirable Suspended Particulate Matter) in Chandigarh has been recorded at a high of 94.7 (ug/m3) against the annual permissible limit of 60 (ug/m3). However, the sulphur dioxide and nitrogen dioxide levels have been found to be well within the permissible limits.

The report pointed to the primary reasons for increasing RSPM. These included stubble burning after the harvest season (twice annually in April-May and October-November), the effect of pollens due to lush greenery, temperature, location of the city and its industrial surroundings, population and vehicle density and excessive transport load, especially due to the use of diesel vehicles.

“Respirable Suspended Particulate Matter in the city is certainly higher than the permissible limits. However, the SO2 and NO2 levels are well within permissible limits. The contributor of air quality deterioration in Chandigarh are activities like industries, illegal burning of dry leaves, pollens from trees and gardens in the city, dust from roadside vacant spaces and operation of generator sets in certain areas adjoining the city. Anthropological activities in the neighboring sites such as burning agro-residue also contribute to the ambient air quality of Chandigarh,” the SoER report pointed out.

“Chandigarh has the highest density of vehicles in India. The fleet of vehicles is over two per capita household. However, strict management of the traffic and control over the polluters/traffic offenders made it possible to minimise the air pollution due to vehicles,” the report added.

Chandigarh, designed by renowned French-Swiss architect Le Corbusier and known for its tree cover, lush green parks and gardens and open spaces, can still breathe relatively easy on the environment front in the coming years. But residents are worried over the increasing chaos on the city’s roads.

Chandigarh was always known for its wide and good roads, green cover and cleanliness. But the vehicular population has increased sharply in the past over a decade. The chaos on its roads is compounded by the unruly, even reckless, driving by many people. Driving becomes a pain at times even though it is not as bad as in Delhi and some other places, Ritika Malhotra, an educationist, told IANS.

Despite the strict enforcement of traffic rules by the Chandigarh Traffic Police, the city has its own share of problems like untrained drivers and rash driving by youth. The city has tried experimenting with cycle tracks to encourage pollution-free cycling, but that is limited only to people who do not own motorised transport.