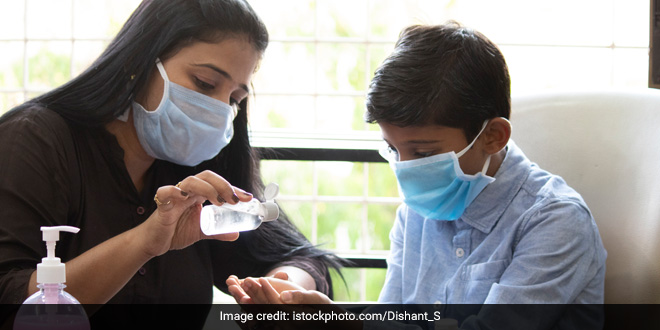 New Delhi: Similar to adults, even children have had to suffer a lot due to the COVID-19 pandemic. Dr Randeep Guleria, Director, AIIMS at the ‘Saluting The COVID Heroes’ Townhall said that when it comes to children, they have already spent an academic year of school at home due to the pandemic and are depending upon online classes. Dr Guleria says that physical schools are very important for children’s character building and online schools also marginalise children who do not have access to the internet.

Dr Guleria also talked to NDTV about the future of children, schools with regards to COVID-19 in India. He said,

Schools and Colleges are not only about education, but it’s also about character building, it’s about getting people to have socialised, to really become good individuals, good citizens of the country and therefore, physical schools are important. Also, it really marginalises those who don’t have access to the internet or not tech-savvy and therefore that marginalisation population had not had any education for the last one and a half years. Therefore, opening schools is very important. But the other important thing is to do it in a manner that we don’t allow the infection to spread and are able to protect our children. I think to do that, vaccination is the strategy. Along with that, we will have to develop other measures. The Pfizer vaccine already has been approved for children. The Zydus Cadila vaccine is a DNA vaccine that is made in India, has been tried on children, and has been shown to be safe. The Bharat Biotech vaccine is also undergoing trials and hopefully, by September, the approval for that should also come.

There have been several researchers, experts, doctors, warning about how the third wave of COVID-19 in India could target children more. Dr Guleria at the Townhall said that he doesn’t agree with this assumption. He explained,

I don’t think that assumption is true for three reasons. The previous waves and the ongoing pandemic has not caused a severe infection as far as children are concerned. Secondly, the data that we looked at in the sero-surveillance showed that a large number of children, more than 50 per cent of the children who were tested both in urban and rural areas, already had antibodies so they had got the infection. It was mild and they have already been protected. Research will evolve and we will have new research coming up, but the important thing is to remember that the virus is also evolving, so we have to be careful when we look at both, how the virus evolves and what research comes up, and also whether that research is up to the date with the way the virus is behaving today.

He highlights that the research we have maybe a few months old, but that may not be relevant today, as we have seen with the older variant and the Delta variant.

The delta variant was much more infectious and caused huge spikes that we saw in the second wave, unlike the first wave which was the original Wuhan strain so there is a sort of a time lag which we have to be cognisant of and vaccine is something that we need to push aggressively in children, Dr Guleria added.

Kailash Satyarthi, Nobel Laureate and Child’s Right Activist also joined the show and talked about how COVID-19 has caused an increase in the number of children who have been orphaned, due to parents dying of the infection. He shared an incident that his organisation helped with,

The issue of orphaned children came before us in May and we raised it which later was also taken by the state and central governments. We got a call from some colony saying that a COVID infected man has died, his body is here and his three small children are crying and nobody is going inside the house, no neighbour, no relative, nor there is anybody to perform last rites for him. The whole day has passed, there is no one to look after the kids as well. We got this news late at night. Somehow, we managed some local people to help cremate the body of the man. The next day in the morning, we managed food and water for the kids, also raised some funds for them but the trauma that those kids faced, crying and being with the dead body of the father, that trauma and the impact of it, I have been saying right from the beginning that it is not only a health crisis, no only an economic crisis, but this is also the crisis of the entire civilisation, this is the crisis of childhood, this is the crisis of innocence, this is the crisis of the future of the entire generation of the world, and we have to deal it with that sense of urgency for our children.

Mr Satyarthi further pointed out that even if we move on from this crisis, do we want to leave those children behind? He said,

And as we know that dozens of millions of children in the world would not be coming back to their classrooms, dozens of millions of children would be pushed into child labour, slavery , trafficking child prostitution. Some of them could be picked up by some extremist forces or some terrorist forces exploiting the vulnerability of the children. This is the condition of the children of our world. And this pandemic has exposed and exacerbated injustices and inequalities which are prevailing in our society. It has also exposed that how apathetic and indifferent we our for our children. Not only in India, I am talking about globally across all countries for many years. And I know, I have been in contact with my partners all across the world and this is the situation of our children.

Dr Amit Sen, Child and Adolescent Psychiatrist, and Director & Co-founder of Children First, also agreed with Mr Satyarthi and said that the pandemic is a global disaster. He further said that unlike other global disasters that we have had, like Tsunami and the Gujarat earthquake, this is not a one-time scene, because those disasters often come and create havoc, death and destruction and then leave us to at least pick-up the pieces and rebuild our lives.

But this is just ongoing and it never seems to end. Every time we try to raise our heads, it knocks us down. So, indeed the experience of everybody, particularly of children, adolescents, teenagers, has been traumatic deeply, particularly for those who are in the forefront of facing it- whether it is through deaths and devastation in the family, or complete loss of livelihood, and so on. So, it is imperative that we try and look at it from different lenses. So, there are two things that I would like to highlight, the knowledge or the ideas that I am bringing here is the collective knowledge that we have gathered in the last one and a half years, in working with families, with children, with schools and colleges, with NGOs and some government agencies, and what we have figured is that it is not just the fear, anxiety and the devastation that the virus has caused in our lives, but it is also the lockdown which has had an equally severe impact on children’s mental health and development.

Entire Adult Population In India Will Be Vaccinated Against COVID-19 By December: Dr NK Arora, Head, Expert Panel On Immunisation

What Have We Learnt From The Second Wave Of COVID-19 To Help Us Mitigate The Third Wave?