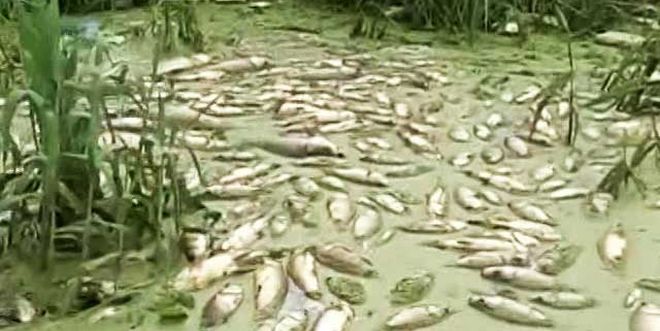 New Delhi: Hyderabad, at one time famous for its picturesque lakes that not only provided drinking water to millions but also served as homes for migratory birds, is offering a very different picture now. Over 23 lakh fish have died in Gandigudem Lake situated near the Kazipally Industrial area on the outskirts of Hyderabad. The reason behind this huge environmental disaster is suspected to be the improper disposal of chemical effluents by pharmaceutical companies located near the lake. The pharma units are alleged to have dumped hazardous wastes that got washed into the lake after heavy rains last week. And, in one of the rare cases, an FIR has been lodged naming six pharma companies after a complaint filed by fishermen, who were dependent on the lake for a living. Notably, this is not the first such incident in Hyderabad in the recent past. The contamination of lake is a problem that has been brewing in the state of Telangana for quite some time now.

Back in June this year, at one of Hyderabad’s biggest lakes, Rampally, over 30,000 fish were found dead. And in May 2017, two other lakes – Shamirpet and Medchal – were found packed with 60,000 dead fish, and the government officials blamed the crisis on the heat (Hyderabad has been averaging nearly 43 degrees) and on a bacterial infection across water bodies. But according to the environmental experts, the lakes are in oxygen distress due to the steady inflow of untreated sewage, industrial and agricultural chemicals. However, the recent development has come as a rude awakening for the state.

Six top pharma companies have been named in an FIR filed by fishermen, who claim they have suffered losses to the extent of Rs 10 crore. The local fisherman Tulasi Singh stated that hundreds of families have lost their livelihood as the toxic waste killed the fishes in the 266-acre lake.

The chemical load increased in the water and fish died. Many fish were 5-10 kg heavy. We have all come to the road and lost everything, the fisherman added.

While speaking on the issue, Sreekanth Goud, Member, Zilla Parishad said, “Companies dumping toxic effluents should be sealed, criminal action should be taken against them. If you let them off after a fine, the same thing will happen again. The air and water here is so polluted, that is why lakhs of fish died.”

Notably, these fish were released into the lake a couple of years ago, as part of cultivation programme, and most of the fish were Rohu that weighed up to 10 kg. Telangana State Pollution Control Board has however advised all the fishermen to not to sell the dead fish in the market as it carries the toxic pollutants and is not fit for human consumption. The bloated fish bodies that got washed ashore are now rotting and gradually decomposing, and the stench of the same can be detected from about 500 meters. The residents living in and around the lake were in for a shock as they found the fish heaped around, raising unbearable stink.

As part of the investigation process, the Telangana State Pollution Control Board along with the Hyderabad Police have also collected the samples of water and fish from the channels connecting the industrial units with the 266-acre water body.

This incident comes to light, as there is a growing concern being raised by environmentalists over polluted lakes. Talking about this disaster, an environmental expert Purushottam Reddy said that many of the pharma units have been recklessly dumping effluents. It turned the lake into a deadly cocktail.

When there is a fresh rain, even the solid effluents dumped in the open areas get washed into the lake, making it impossible for even fish to breathe, so they are choking to death, if not being poisoned by the toxicity that is growing in the lake, said Dr Reddy, referring to occasional showers in recent days.

Also Read: Bhopal’s Twin Lakes, One Of Which Is A Water Supplier To The City, Is Struggling With Encroachments And Disposal Of Untreated Sewage

“There is no system of collecting and disposing of solid industrial waste. It is a failure of the pollution control board, so they prefer to blame the bacteria and infections instead,” Dr Reddy alleged.

In the recent past, the Telangana State Pollution Control Board has banned a few companies for improper disposal of their toxic industrial waste near the water bodies. But the stink rising from the piles of dead fish, underlines the scale of the problem and need for some long term sustainable solutions.