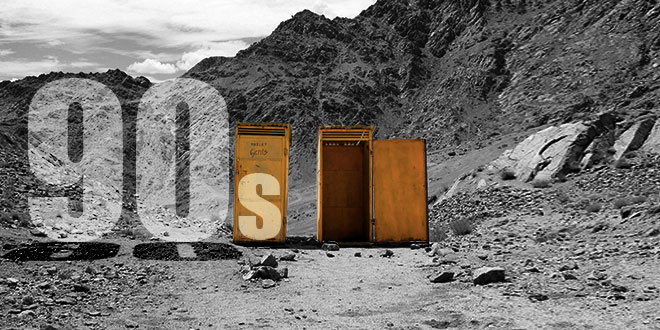 The launch of CRSP in 1986 saw the first massive toilet construction programme. The much hyped programme was a welcome initiative for the sanitation scenario in India but unfortunately the number of toilets constructed was insufficient. But 13 years later, in 1999, it was found out that nearly 50 per cent of the toilets constructed between that period remained unused due to lack of awareness, cost issues related to maintenance and lack of participation by few states. Further, participation of schools and building of community toilet complexes also did not take off as expected. With these in mind, the Central government launched the Total Sanitation Campaign in 1999. The programme decentralised planning and implementation through village panchayats, focusing on demand based toilet construction.

The subsidy amount to be provided for toilet construction was increased to Rs 3,500, of which Rs 2,200 was to be given by the Central government, Rs 1000 by the state government and Rs 300 by the beneficiary. The programme continued to focus on BPL households and set a target of ending open defecation by 2017. It also laid more stress on community participation in construction of toilets, asking for district administrations and gram panchayats to ensure more and better participation of people. IEC was also given broader importance and 15 per cent of the Central funds were asked to be spend on creating awareness on toilet usage, so that unlike earlier programmes, the toilets constructed did not lie unused. The Nirmal Gram Puraskar was also introduced, which rewarded ODF villages with cash awards.

By 1999, sanitation had become a major factor in rural and urban development. With the global focus on sanitation and related issues like diarrhoea, infant mortality, school dropouts etc. sanitation had become a talking point. The Total Sanitation Campaign reduced the dependency on subsidies and by encouraging community participation, ensured speedier building of toilets. But the TSC was also unable to end India’s sanitation woes. Low funding from the Central government was a partial reason why this happened, said Mr Sunil Samuel, Water and sanitation specialist, World Bank. 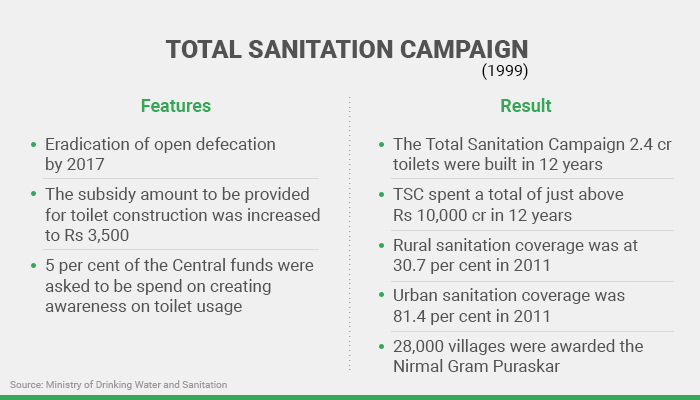 Under the much hyped Total Sanitation Campaign, 2.4 crore toilets were built in 12 years

Under the Total Sanitation Campaign, 2.4 crore toilets were built. While the number seems impressive at a glance, the time taken to build 2.4 crore toilets was 12 years! So under the TSC, an average of 24 lakh toilets were built every year, not enough to eradicate open defecation. Further, TSC spent a total of just above Rs 10,000 crore in 12 years. From a budgetary point of view, the amount was way less to tackle sanitation issues in the country. The spending between states was uneven, resulting in some states doing well, while others lagged behind. While Sikkim and Goa were biggest per capita spenders, Bihar and Uttar Pradesh were the lowest. By the end of 2011, rural sanitation coverage rested at 30.7 per cent (up from 21.9 per cent in 2001) and urban sanitation coverage was 81.4 per cent (up from 73.7 per cent in 2001). Though insufficient, the TSC did increase India’s sanitation coverage, especially in rural areas. Up to 28,000 villages were awarded the Nirmal Gram Puraskar, till 2011.