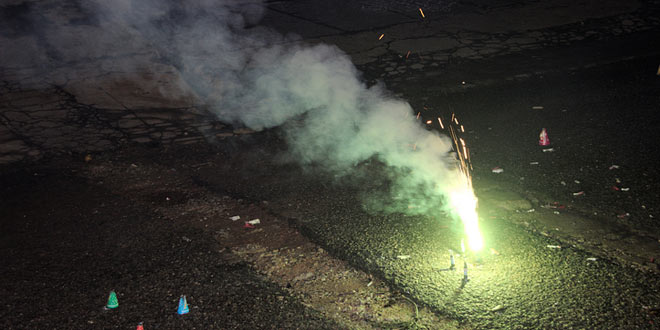 Sivakasi’s firecracker factories, which are estimated to have an annual turnover of nearly Rs 5,000 crore, are today staring at a loss of nearly Rs 1,000 crore, after the Supreme Court banned the sale of firecrackers in Delhi and National Capital Region (NCR) on October 9. Citing last year’s air pollution crisis, when thick smog hovered over Delhi several days post Diwali, the court said it wanted to see whether a cracker ban is effective enough to improve the capital’s air quality. The 90-year-old firecracker industry in the town remains the producer of 90 per cent of India’s firecrackers, and is known for its highly unsafe environment of operation, including child labour, as well as massive generation of waste, damaging the environment.

P. Raja Gopal distinctly remembers September 2012. For Mr Gopal, September 6 was a busy day as he spent most of his time in Sivakasi, for work related to his NGO Nether’s Economic and Educational Development Society (NEEDS). The next morning, Mr Gopal woke up to the horrifying news of 39 deaths and scores wounded in a fire at Sivakasi that made national headlines. Tyhe numerous dead in the 2012 incident also drew international media attention, chronicling the pathetic state and working condition in the town’s firecracker industry, which included rampant presence of child labour and environmental abuse.

Employing over 3.5 lakh people, the firecracker industry in Sivakasi is dominated by lack of regulation. Around 400 factories manufacturing firecrackers are present in the region, of which 300 are estimated to run illegally. A 2012 report by the Tamil Nadu Fire and Rescue Service compiled after the September incident highlighted how most small and medium scale factories in Sivakasi regularly flouted norms to employ people and continued to make them work in hazardous conditions. Some of the small manufacturing units did not even have a proper factory and operated from homes. Many homes in Sivakasi continue to stock dangerous and fatal raw materials such as gunpowder, sulphur and potassium, resulting in breakout of accidental fires and deaths.

Deaths are quite common in Sivakasi because most of the workforce has no access to safety equipment while manufacturing. Further, they often store raw materials in their houses, resulting in accidents and deaths. The operation of these small industries from households makes it difficult for officials to track them and shut them down, said Meenakshi Vijayakumar, Deputy Director, Tamil Nadu Fire and Rescue Service. 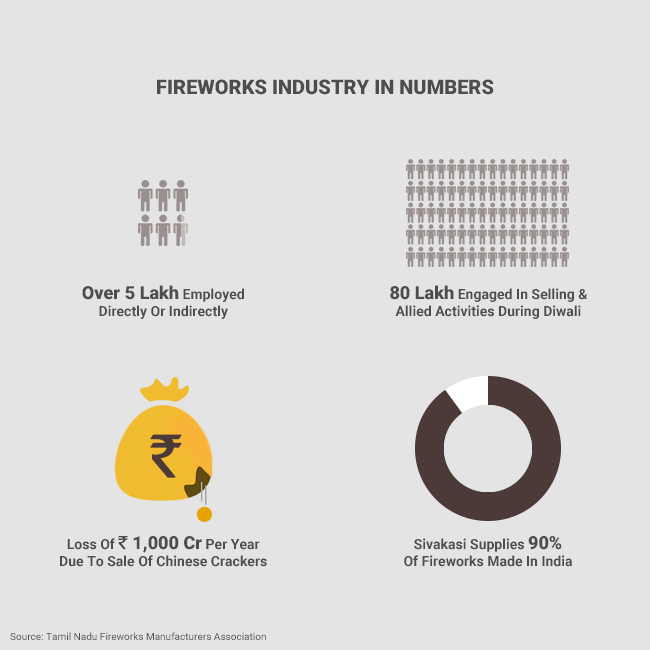 The Indian firecracker industry is made up of staggering numbers

Child labour is another consistent problem that Sivakasi is infamous for. Though the number of children working in firecracker factories has come down significantly, the practice still persists. A survey conducted by the NGO NEEDS found out that many industries continued to employ up to 30 or 40 children in each manufacturing unit. The claim has been contested by the Tamil Nadu Fireworks and Amorces Manufacturers’ Association and in 2012, the number of children enrolled in schools in Sivakasi were 32,000, thrice the number at the beginning of 1980. But pockets of small manufacturing units in the region still continue to employ children.

The number of children employed in these industries has definitely come down but continue to exist in small numbers. The poor condition of families prompts them to send their children to such factories for meagre extra income, said Mr Gopal.

Waste generation is a significant problem in Sivakasi, and the expansion of the fireworks industry over the years has contributed to further production of hazardous waste in the town. Sivakasi generates 40 tonnes of solid waste every day, of which only 12 to 15 tonnes are treated. The amount of waste generated however, shoots up to by nearly 2,000 metric tonnes during the months leading up to major festivals. Most of these are generated from burnt paper and chemicals like phosphorus, sulphur and potassium. The town does not have a recycling plant yet and hazardous waste often remains either uncollected, or is dumped in open spaces, polluting the environment further. Air and noise pollution are major concerns for Sivakasi as well. During the times of testing of firecrackers before the festive season, the amount of particulate matter in air increases to 1413 mg/m³, compared to the normal reading of 20 to 28 mg/m³. 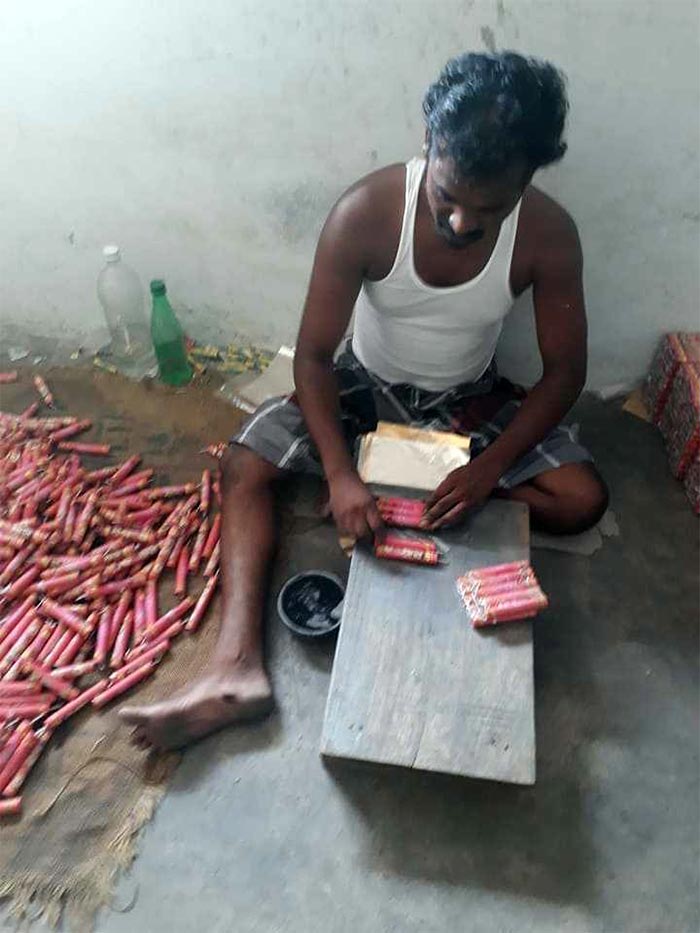 Due to unsafe work environment, many workers in Sivakasi suffer from health hazards

Hazardous wastes from firecrackers have always been our biggest problem. We do not have sufficient resources to collect them from all the industries in Sivakasi and since we have no recycling plant here, we often transport them to nearby bigger towns. We are trying to ensure that the industries at least practice segregation and put hazardous wastes in separate containers so that they are easier to treat in plants, said Thiru K. Rajan, Municipal Commissioner, Sivakasi.

Exposure to hazardous elements has also affected much of Sivakasi’s population, especially the ones working in the firecracker industry.

Pulmonary diseases are highly common throughout the region’s industrial belt as aluminium, phosphorus and sulphur dust is inhaled regularly by the residents of Sivakasi. Continuous exposure to such materials has also resulted in ample instances of people suffering from skin burns, liver, heart and kidney diseases, as well as affecting the health of pregnant women.

During our surveys, we have noticed how ill-health is a common factor in nearly all households in Sivakasi’s industrial belt. People from all ages have been victims of the pollution prevalent in the region, especially those who have worked in any cracker making factory or stores raw materials in the household. The pollution has been affecting the environment for years and impacting health adversely in the region, said Mr Gopal.

The Supreme Court’s order banning the sale of crackers is being celebrated by environmentalists and given the state Delhi was in last year post Diwali, the importance of the verdict is understandable. But Sivakasi has its own story to tell, as the economics of the business of firecrackers cannot be ruled out. The massive turnover, along with the large number of people employed in the region’s firecracker industries must be taken into consideration before further decisions on firecracker regulations are taken. Amidst the hue and cry about air pollution, Sivakasi’s own problems have drowned somewhere, especially the massive hazardous waste it generates and how there has been negligible efforts to treat it, despite the cracker industry operating for 90 years. Any future decisions regarding the fate of firecrackers in India must take into consideration the fate of Sivakasi as well, and all that the region has witnessed over the years, in order to better the livelihoods and the environmental condition of the town.