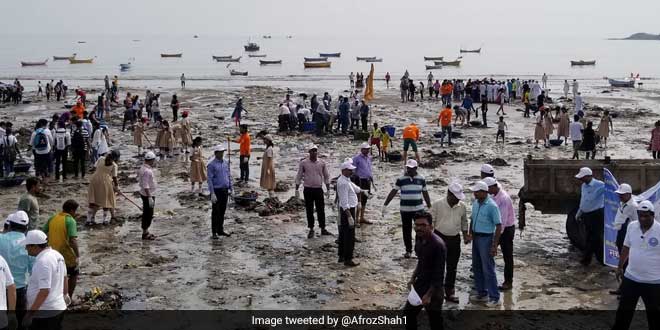 New Delhi: For the beach warriors, International Coastal Cleanup Day on September 16 was like a ‘date with the ocean’. In Mumbai this occasion saw more than 3,000 volunteers including 1800 school students come together to celebrate 100 week landmark of the world’s biggest and longest beach cleanups at Versova beach. This beach has seen around 7.2 million kilograms of garbage being removed, over the span of two years. That day another 2.54 lakh kilograms of plastic and garbage were removed, thanks to all the swachh warriors present at the beach.

Just how we crave food, I crave for cleaning up of our oceans. That is the mantra I give to all my swachh warriors who participate with me in these cleanups, says 36-year-old Afroz Shah, lawyer and beach cleanup crusader who has been leading the movement at Versova since October 2015. 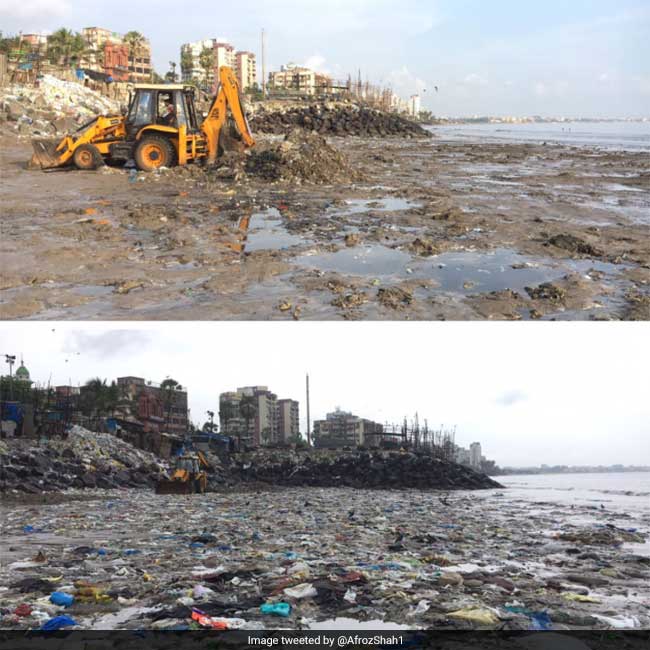 Versova Beach on its way to get a clean makeover, yet, again

With four excavator machines, Mumbaiites along with representatives of the United Nations Environment Programme (UNEP), Randeep Hooda and other politicians and diplomats cleaned up north central part of the 3km long beach between 3pm and 5pm.

Explaining the cleanup drive activity, one of the volunteer from Afroz’s team added, when we were removing the garbage and plastic from the beach we were immediately putting it in the tractors as we never wanted the roads of Mumbai to get filled up with all the garbage. Later these tractors were being sent to recycling houses in Mumbai.

Actor Randeep Hooda, who was also part of Afroz Shah’s recent cleanup drive during Ganesh Visarjan (immersion) at the end of the 10-day festival, also joined the latest cleanup effort said, Versova is surrounded with Milk packets and Industrial sacks, these were some of the biggest things we found here during the Saturday cleanup. We need to start a chain of actions – we have to stop buying these things which ends up coming to our oceans. And if we have to buy these non-biodegradable items then we need to segregate the waste mindfully. 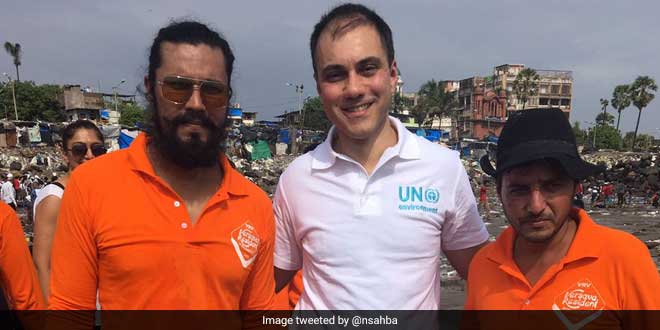 Like every other time, the man behind the cleanup activities in Versova – Afroz Shah had one plea for everyone – stop use of disposable plastic. “We have two choices – either we can live a life of convenience or we live in a healthy planet. We can keep on dumping these non-biodegradable items into the oceans or we can stop this and start segregating and using the items that harm are planet wisely,” added Afroz Shah.

His efforts have drawn the attention of Prime Minister Modi and United Nations and are now setting an example for the world to follow. Naysan Sabha from the United Nations Environment Programme told NDTV, “Every year 8 million tonnes of disposable plastic ends up entering our oceans, ends up entering our ecosystem – it destroys lives of people, kills our marine life. This kind of local, tangible action when replicated, when multiplied across the beaches of India, across the beaches of Asia and the Pacific, across the world, will help us solve the global issue.”

100 weeks and 7.2 million kg of trash later, one man continues to do what he is best at – cleaning the oceans. Afroz Shah who has been awarded the UN’s top environmental accolade — Champions of the Earth award, is currently working to replicate his Versova model across all 19 beaches of Mumbai. The Ministry of Environment and Forests (MoEF), has also decided to replicate Afroz Shah’s efforts for 13 other beaches across the country.

India Is Losing $53.8 Billion Every Year As A Consequence Of Inadequate Sanitation: UNICEF

Waste Toilet Paper Can Be Converted Into Electricity: Study