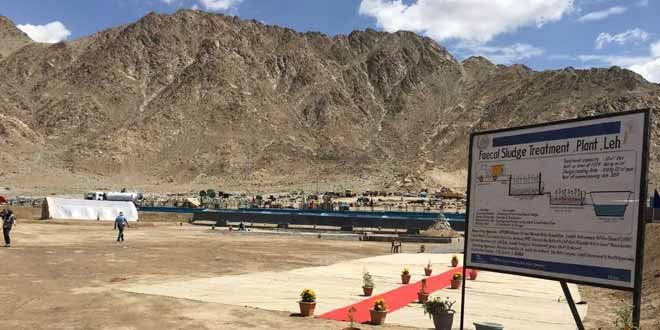 Certain places on earth redefine beauty and take your breath away, quite literally! The district of Leh in Jammu and Kashmir, situated above 11,400 feet from the sea level is a jewel in India’s crown of geographical beauty, with barren mountains, clear view of the infinite blue sky and lakes with clear, pristine water. Tourists from all over the world visit Leh throughout the year to enjoy Leh’s scenic beauty and tourism forms the backbone of the district’s economy. Leh has a population of just over 1,30,000 but receives a large number of tourists every year. In 2015 alone, 1,81,000 people visited Leh while the number increased to 2,35,698 in 2016. While a boost in the number of tourists is healthy for the economy, the district began showing signs of distress as numerous hotels and buildings cropped up during this tourism boom, impacting the district in terms of sanitation and water supply.

For long, disposal of faecal sludge had been a major problem for Leh. Faecal sludge, a mixture of human excreta and water that originates from establishments and is usually stored in septic tanks before being cleared out. Since it contains human excreta, faecal sludge could be harmful, especially if it seeps in to the soil. India has only 6 functioning faecal sludge treatment plants (FSTPs) for its 8,000 cities and towns, of which only 200 have underground sewerage systems. Leh did not have an FSTP until recently, and faecal sludge generated from hotels and houses were collected in septic tanks. The district’s underground water level is high, and the risk of faecal sludge seeping into the soil was a recurring risk the district was facing. The first FSTP in Leh, which is also India’s first public private partnership in faecal sludge management, was inaugurated on August 10, 2017, the construction of which was completed after several challenging trials and tribulations, but has nonetheless brought much relief to the district in addressing treatment of faecal sludge.

Leh has witnessed tremendous growth in the last ten years.  More than 2,50,000 tourists visit Leh every month, a super sharp rise from the 30,000 visitors Leh used to get monthly till 2009-10. With the increase in the number of tourists, the number of hotels and guest houses have gone up considerably and needless to say, as has the amount of faecal sludge generated in Leh. Being a cold desert region, majority of households in Leh were dependent on dry toilets which use very little water. Underground water pollution was relatively unknown in Leh, as people would often directly consume underground water without filtering. But with the increasing number of hotels and new residences, Leh witnessed an economic boom and modern style flush toilets became common and so did the building of septic tanks. Overflowing septic tanks began leeching into the ground, resulting in brownish water coming from borewells. The municipal corporation realised the need for a faecal sludge management system.

Challenges In Setting Up The FSTP

The geography of Leh proved to be daunting challenge. Roads in Leh have been dug up for the past two-three years as a part of the ongoing sewage system installation. The natural geography of Leh too was a deterrent, as uneven roads and houses which have toilets situated in too high or too low areas are problematic. The ongoing installation of a sewage system estimates that once it is completed, around 50 to 60 per cent of households will be covered under it, and the rest will continue to use septic tanks. The extreme cold climate of Leh in the winters was a major challenge and the FSTP will be run with lower capacity in the winters to avoid breakdown of the FSTP itself. 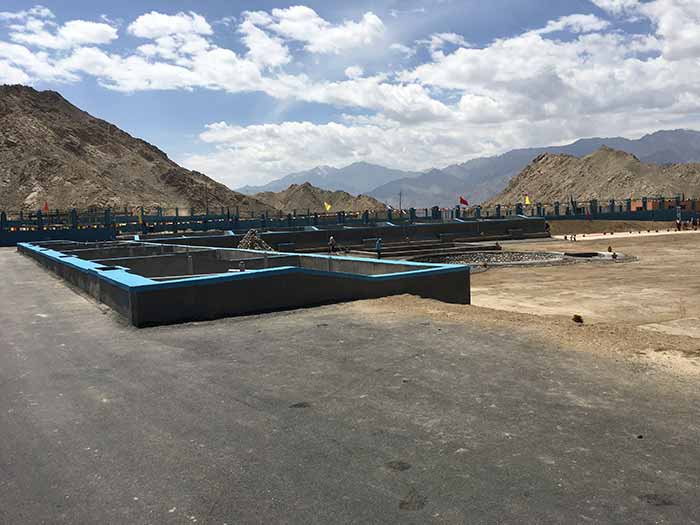 A view of the Faecal Sludge Treatment Plant at Leh

Installation of the FSTP

As the problem of faecal sludge in Leh grew, officials from the Municipal Committee of Leh (MCL) visited Devanhalli near Bengaluru in February 2017 to observe the functioning of a Faecal Sludge Treatment Plant built jointly by Consortium for DEWATS Dissemination (CDD) Society and Bremen Overseas Research and Development Association (BORDA). The plant functions wholly on the basis of biological treatment without the involvement of chemicals. A desludging vehicle collects faecal sludge from septic tanks and pours it into a feeding tank which further pours the sludge into a biogas digester for the sludge to stabilize and post filtration is collected. The MCL was impressed with the functioning of the plant and considered building a similar plant in Leh, with the help of the same stakeholders. A preliminary proposal was submitted by BORDA in May 2017.

We submitted a proposal in May 2017 and met the CEO of Leh Development Authority who showed interest in the project. Our FSTP in Bengaluru has been designed as a garden with no odour or dirt anywhere near the FSTP. We wanted to apply the same model in Leh. The need for an FSTP was urgent in Leh due to the ongoing underground water pollution, said Manas Rath, Senior Advisor, BORDA.

The MCL speedily allotted land for the project and the construction of the FSTP was completed within three months. The key to the speedy completion of the project was the successful partnership between BORDA and CDD as well as the willingness of the LAHDC who were quick to allot land and fulfill the purpose of the project. The collaborative efforts of the National Faecal Sludge and Septage Management (NFSSM) Alliance, urban local bodies, along with entities including BORDA, Blue Water Company and CDD Society were instrumental in setting up the FSTP in Leh. Dasra an organisation working with the NFSSM Alliance and its partners, with the support of the Bill and Melinda Gates Foundation also played key roles in setting up the treatment plant.

Suction trucks or ‘honey suckers’ will be used throughout Leh to clean septic tanks. These trucks will be used to clean septic tanks regularly as per a schedule maintained by the municipal corporation in Leh. The civic body will also facilitate for an on-call facility where once a septic tank is filled up, a call can be placed for a suction truck to arrive and clear out the sludge. Bringing out sludge will only be done during the morning as falling temperatures in the evening can result in hardening of sludge, making the suction pumps unusable.

The five to six months of summer will be the time when majority of the cleaning and treatment will be done. To collect sludge from the septic tanks, BORDA developed a mobile gulper which can reach septic tanks in narrow lanes and collect the sludge from them. 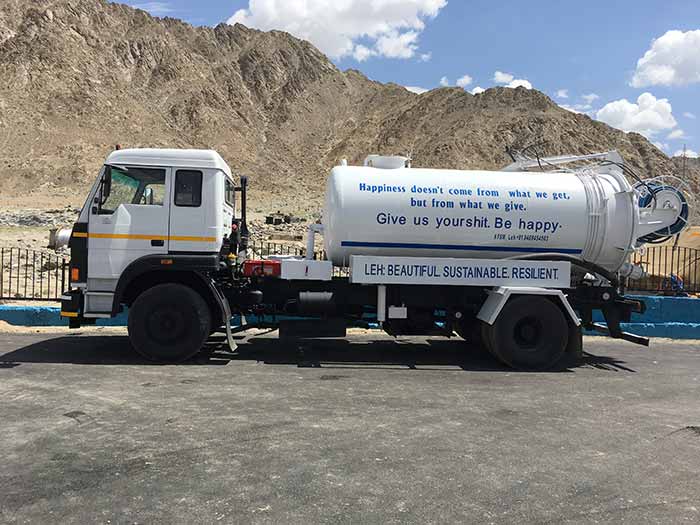 What next for Leh’s FSTP?

Leh’s FSTP is the world’s first such treatment plant at such a high altitude. The freezing temperature and Leh’s local and tourist population are permanent challenges that the operation of the FSTP will come across. BORDA estimates that by next year, a very good cycle of scheduled cleaning will be in place. The municipal committee of Leh has directed every hotel to get its septic tank cleaned out once a year for which notices would be sent to them 20 days before the scheduled cleaning. Due to the high water table, it has been mandatory for hotels to get their septic tanks cleaned out once a year, failing to do this would lead to their hotel permits9 not being renewed.

We will keep up with our desludging activities at night. Permanent and proper septic tanks are a must for all hotels and we have issued directives regarding the same, giving them, a deadline of November 15. We will not let septic tanks be filled up and will clear them of faecal sludge before they become full. We also plan to incorporate residential households under the faecal sludge management programme soon, said Dr. Zahida Bano, Chief Executive Officer, Leh Development Authority.

The Municipal Council of Leh has also given extra land for the FSTP project so that in case the faecal sludge generation increases, there is enough land to extend the FSTP’s functional capabilities. The current capacity of the FSTP is to treat 12,000 litres of faecal sludge per day.

We did not want the treatment plant to be too big since it is not the metro city. We have built a treatment plant with a certain capacity at this point. If required, we can double the capacity in the coming years. We wanted to figure out how well the treatment plant functions in such climactic conditions. After a year, we will take a call whether the FSTP’s capacity is to be increased, said Mr Rath.

The FSTP in Leh is a successful example of a treatment plant installed despite several challenges naturally present in the region’s geography. The contribution of several stakeholders like BORDA, CDD, The Blue Water Company must be acknowledged in the successful installation of the plant, as well as the Leh Development Authority’s supportive role in the whole project. On the whole, India requires nearly 8,000 FSTPs across its towns and cities to urgently address the need of faecal sludge management. The FSTP in Leh can be an inspiring example for other towns and metros that if Leh can install a faecal sludge management plant braving so many odds, other towns and cities can and should follow Leh’s footsteps.

Once Assam’s Lifeline, The Brahmaputra River Today Is Struggling with Oil Pollution and Waste Disposal Which Are Gradually Rendering It Lifeless