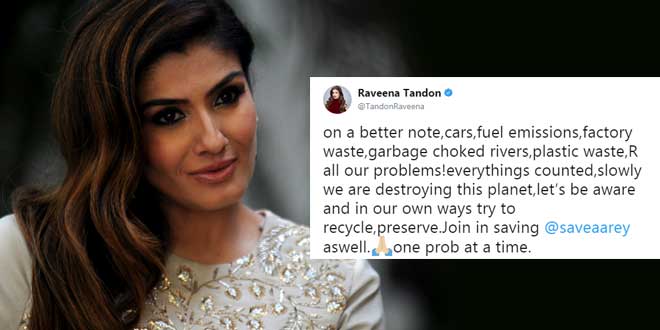 New Delhi: On Thursday, Actor Raveena Tandon took to Twitter to highlight how each one of us – From government officers to citizens are responsible in destroying the planet. Among the series of tweets that she posted, the first one showed how Mumbai is following Delhi’s footsteps in air pollution. She tweeted, “Smog in Mumbai! We are going the Delhi way soon… well done Maharashtra government! Maharashtra has lost maximum forest cover in past 3 years! And now Aarey Forest Soon! Welcome to pollution Hell!,” along with a picture of the road. The tweet comes as a response to deforest Aarey Colony, which is considered as Mumbai’s green lung. Currently, the government is planning to cut 500 trees there in order to build a car shed.

Raveena, who is an ardent animal lover and an environmentalist, in another tweet highlighted how everyone is responsible for polluting the environment, she adds,

Everything is being counted, slowly we are destroying this planet. Let’s be aware and in our own way, try to recycle and preserve. Join in saving …Save Aarey as well. One problem at a time.

Soon after this, Twitterati came into action – there were some who supported the concern Raveena raised.

Film Industry including business tycoons like Ambanis need to speak up and put pressure on politicians and babus. Next generation will be worst sufferers if we don't have green habitat and Forests..In the name of "Development" Environment is turning out2b "Disaster"

Action comes only when the situation goes extreme. Govt and ppl wake up only when its alarming…hope ur msg influences the conerns!! https://t.co/zKHwypOEF6

While, there were many who trolled the actor with hate comments.

@TandonRaveena stop using ur vehicles it will be great help for the nature,travel by trains/buses https://t.co/R7BmwpbsAy

“Somewhere we have to make people realise that there are alternatives available to manage the waste in a better way and opt safe sanitation practices.”

She also urged people to opt for eco-friendly festivals to avoid harming the environment. “Awareness among people is of utmost importance as only that can translate words into action.”

Watch: People Should Realise That Waste Needs To Be Managed Properly: Raveena Tandon

One Way To Get Rid Of Menstrual Taboos Is To Make Sanitary Napkins Free: Actor Akshay Kumar