New Delhi: Have you ever heard of a musical band which plays instruments made out of trash? May be not. But a group of students from Mahabodhi Residential School in Devachan, Leh, Jammu & Kashmir, are showing the world that music can be made out of trash. From the famous Amir Khan’s songs like Bam Bam Bholey to the traditional Ladakh songs, the ‘Trash Band’ which was formed in 2015, plays it all using instruments they have made using waste items. For the last two years, the band has been playing successfully in the famous Ladakh Festival. Their mantra is simple, to tell the word and educate people that trash should be treated as a treasure.

I was inspired by Prime Minister Narendra Modi’s Swachh Bharat Abhiyan and always wanted to do something for the cause. I had two interests, one was music and second towards the environment. Many times, during the school cleanups I used to see that the waste is not getting recycled properly. We do a cleanup, but what after that? That’s when a thought stuck me that why don’t we use trash for other purposes like decorations. In the meantime, students like me who had interest towards music never had enough money to buy musical instruments. And that was the beginning of our Trash Band, says Class X student Mipam.

The Trash Band was formed by the students of Class 8 and 9 under the mentorship of Aarati Rao, who was teaching the students as a part of her fellowship programme by the Third Pole Education Base, which is a one of its kind social impact initiative with the twin objectives of spreading quality education and creation of awareness on sustainable practices.

Remembering the good old days, Aarati Rao added, for students there, art, music, and environment were equally important as Maths, Physic, and Science. This band was made in front of me, I was guiding them. For these students music was their passion and working towards the environment was a need. The Trash Band is the result of all of this, the band started using instruments by upcycling waste items, first because there was a dearth of musical instruments, second, they wanted to do something for the environment. What they did was simple – they just mixed both these things together. 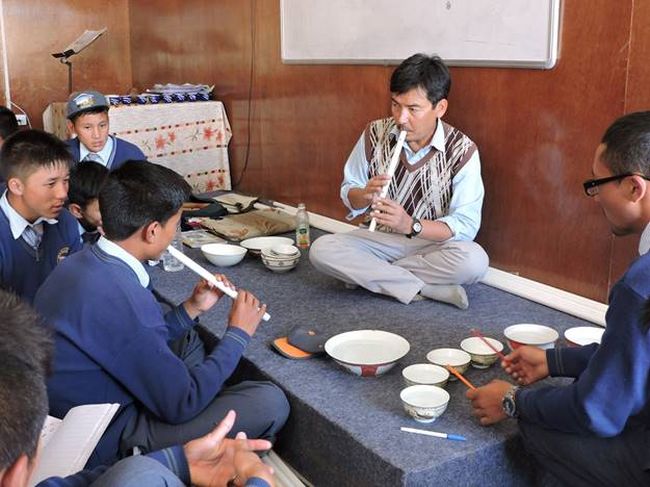 The famous ‘Flute Man Of Ladakh’ knowns as Angchuk Ralam Ley also join the trash band squad, back in 2015, he taught the school students how to make flutes from PVC pipes, and a traditional Jal Tarang using Chinese soup bowls filled with water. And since then the Trash Band is teaching music to other school children. From flutes made of PVC pipes to old drums, bowls, spoons and disposable plastic glasses, the Trash Band uses every possible item to make music out of it.

Jigmet Nurbu, another Trash Band member added, in India, there is a lot of garbage problem, we humans, if we work smartly we can solve the problem. If we stop seeing waste as waste and start using it as a treasure, we will definitely succeed in our mission. The future of the planet is in our hands, we have to save the environment. By making a Trash Band we are showing the world how waste can be used effectively. 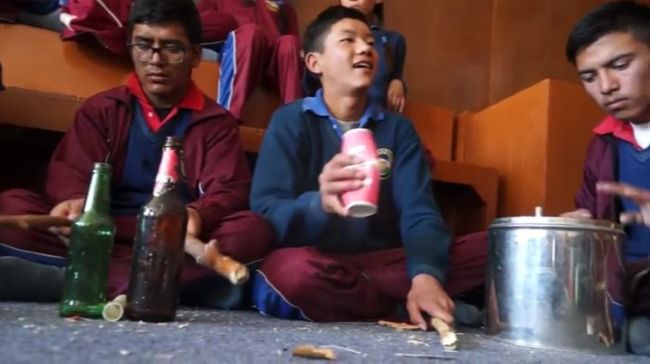 The story of this Trash Band has not only won thousands of hearts across the country but has also won the Grand Prize from amongst 2,512 Stories of Change submitted for the ‘I CAN Awards 2015’ organised by Design for Change, a not-for-profit organisation that challenges children across the country to solve problems in their community. Mahabodhi Residential School in Devachan, Leh, Jammu & Kashmir was one such school which was identified by them and the school children were motivated to take up a prevailing issue in the school to create a sustainable solution by themselves. The students created Trash Band – an initiative to be remembered in the history of Green India movement.

Cleaning the Ganga: These Two Youngsters Focus On Flower Waste Treatment In Kanpur To Cleanup The Mighty River Of India

Recycling Is Passé, This Social Enterprise Is Upcycling Waste Into Ingenious Consumer Products