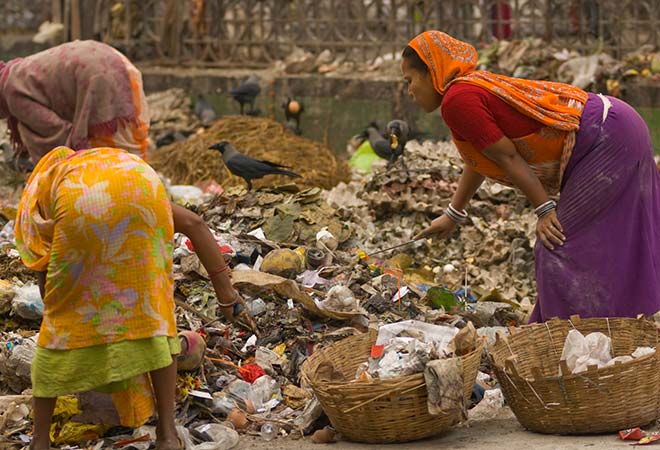 Season 2 of NDTV-Dettol Banega Swachh India campaign has carried forward its mission of finding India’s ‘Swachh Warriors’ or those who have taken up the duty of cleaning the country by themselves.

One such set of ‘Swachh Warriors’ are those who are considered to be from the lowest strata of the society, the manual scavengers. They are also addressed as Valmikis.

They are the sewage workers, sweepers, rag-pickers who work on low wages, suffer stigma and for whom each day at work involves risking their lives through daily exposure to toxic material which surrounds them.

Ideally they should be the Superstars of India’s biggest cleanliness campaign – PM Modi’s Swachh Bharat Abhyaan, but the irony is, these Swachh Warriors have now adopted the motto,‘Jhadho Chodo Qalam Uthao’ (instead of brooms, pick up pens).

Despite being banned by law under the Manual Scavenging Act of 2013, the activity still persists in our country. The task of cleaning the dry toilets, sweeping and picking up human faeces from streets and roads, is largely carried out by the women in the families.

The Indian Railways, is the largest employer of manual scavengers, and now is trying to eliminate such tasks. As the trains’ lavatories are open-holes, tons of waste are directly dumped on the tracks and have to be manually cleaned up every day.

Watch: How the Sant Nirankari Charitable Foundation (SNCF) adopted 46 railway stations across the country as part of the ‘Swachh Rail – Swachh Bharat Abhiyan.’

To eradicate manual scavenging, the Indian Railways is now planning to convert the current toilets into bio toilets. This will, at most, dump the effluents in the form of water out of the lavatories and the rakes will prevent any direct discharge on the tracks.

However, India is still a long way from completely doing away with manual scavenging. The issues faced by those who clean the gutters still remain. The toxic gases coupled with unbearable levels of heat in the gutters, can prove to be a fatal combination. The plight of India’s rag-pickers is not any different. They start early every morning and go through a mountain of garbage to segregate the recyclable and non-recyclable waste materials. Today, there are about 2 million rag-pickers nation-wide, most concentrated in the big cities.

An even bothersome figure is that out of the 3.5 lakh rag-pickers in Delhi-NCR and Mumbai, 1.2 lakhs are children aged below 14 years.

“They are not prepared to deal with such kind of toxic waste because often they are not aware of the toxicity of the waste” says Ravi Agarwal, Director, Toxics Link. “If you throw a thermometer and there is mercury in that, the waste picker will not know that its highly, highly toxic (and) that by touching it, it can harm their bodies badly, and if it’s a child waste picker (it will) hamper them permanently,” added Ravi Agarwal.

Each day these heroes of India wage a losing battle with their ever deteriorating working and health conditions, to keep our surroundings clean. The least we can do is to recognise them as Swachh Warriors and as a society work towards improving their lives by eliminating this age-old horrible practice which really has no place in the 21st century world.

If you know a person who has done a lot to make India clean and healthy then nominate that person now for Banega Swachh India’s Swachh Warrior.

Meet Other Swachh Warriors:
Abhishek Who Travelled Across India In Cycle To Spread Swachhta Message
Meet Madan Pushkar Who Made His Village Open Defecation Free
Once A Ragpicker, Manjula In This Cleaning Firm Now Have Turnover Of Rs 1 Crore

Paathshala School: We Must Treat Our Waste Ourselves