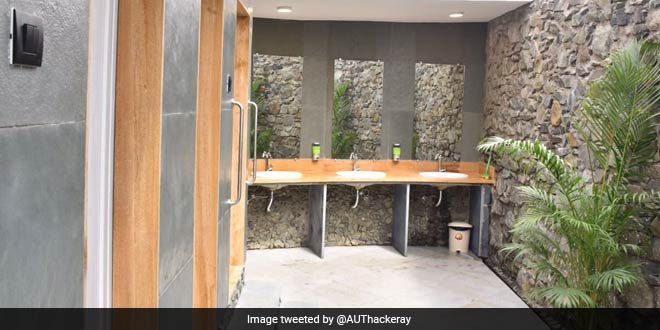 New Delhi: What happens when a bunch of ex-junkies from Norway want redemption in their lives? On the other hand there is this huge population women in India’s financial capital Mumbai who need better sanitation facilities? Concerned by the low levels of hygiene and cleanliness of public toilets, 15 former drug addicts and convicts including five women come up with an idea to build an all-women’s sanitation facility. To give a positive direction to their lives, this group of ex-convicts joined the Norway-based NGO, ‘Back In The Ring’ (BITR) at different stages in their lives. The NGO conducts yoga programme every year for the former addicts and at the end of which they are brought to India for a service project. The ex-junkies wanted to test the principle of ‘Karmayoga’, one of the several spiritual paths defined in Hinduism, which essentially means serve someone and make their lives easy. Hence, they chose to serve female commuters who travel long distances on a daily basis and provide them with sanitation facilities.

The idea for Mumbai’s toilet project was zeroed down after Alexander Medin, founder of BITR came to know about the condition of city’s public toilets. The group had earlier worked on similar sanitation projects in Goa and Karnataka.

The toilet project, constructed at a cost of around Rs 20 lakh, was funded by Mumbai-based steel giant, Jindal South West (JSW) Group. The land for the toilet and labour for its construction was provided by the Brihanmumbai Municipal Corporation (BMC).

From monitoring the overall toilet construction process to undertaken manual work like cutting stones, drilling walls of cement to gathering raw construction material, the 15-member team diligently worked for months towards building a toilet complex comprising seven toilet blocks. Local municipal authorities will be in charge for running and maintaining the toilet complex.

The public toilet, built opposite Mumbai Central station at Tulsiwadi area, includes facilities like a sanitary napkin dispenser, a child-feeding enclosure and a changing room.

This is definitely a great initiative considering the hygiene levels of public toilets. And it also a progressive step towards ensuring menstrual hygiene for women. Having sanitary napkin dispensers will make commuting convenient for women during their menstrual cycles. Pads here are cost-friendly and easily accessible. I believe every public toilet must have facilities like these, says 25-year-old Nishta Gupta who commutes daily from her house in Powai to her work place at Mumbai Central.

Also Read: Use Toilet And Get Paid At This Ahmedabad Café

“While on one hand we are building mega-projects like coastal roads, highways, bridges, etc, one other hand there is still a dire need for women’s toilets. And it is facilities like these (BITR toilet) that will bring a smile on the faces of young women,” mayor Mahadeshwar said. At the event, Ms Ollestad spoke about the importance of developing toilets across the India and how this step can go a long way in empowering women.

The sanitary napkin vending machine in the toilet was contributed by Mr Thackeray. Such vending machines will soon be installed in other public toilets and government secondary high schools by the (BMC).

There are about 1,200 public toilets in the island city for both males and females but the all-women toilet being first-of-its kind, the BMC Commissioner Ajoy Mehta has granted a permission to construct 10 more such toilets. The next exclusive women toilet is likely to come up at Marine Drive.