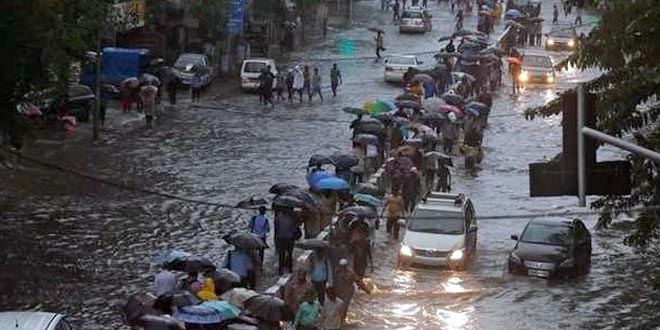 As Mumbai recovers from the worst rains it faced in 12 years, netizens reminded the people of Mumbai why there is an urgent need to effectively manage their waste. The city of 18.4 million people produces around 9,400 metric tonnes of waste daily and is running out of space for all its waste. Though rains that caused severe floods and waterlogging in the city is a natural disaster, the indiscriminate dumping of untreated waste that has clogged all the drains is one of the major reasons why Mumbai was left paralysed.

In a bid to remind Mumbaikars about the concept of waste management, Actor Pooja Bhatt tweeted, ‏”Mumbai has turned into Venice, the garbage floating down the roads have replaced the Gondolas. A rude reminder to dispose with consideration.”

Mumbai has turned into Venice,the garbage floating down the roads have replaced the Gondolas.A rude reminder to dispose with consideration.

While Dia Mirza, who is actively involved in Swachh Bharat Abhiyan related activities added, “Waste management is key. Agree citizens can do better. But urban development must include infra to manage plastic/toxic waste. #MumbaiFlooded

And reactions poured in from other people too – Some blame the citizens of the city, while some put the onus on the authorities

To Date where 80% of the Mumbai Streets are Closed for #MumbaiRains What have we learned? You throw garbage everywhere and now stuffer?

Idiots throw garbage in sewers round the year & block them. corporations don't clean them before monsoons.same story pan India #MumbaiRains

The people who lack civic sense should be blamed as much as BMC . Garbage all over road today as water receded . #MumbaiRains

#MumbaiRains Seeing the garbage on roads yesterday night, thought of every plastic thrown pops up!!

And in a middle of all this, a Good Samaritan was also spotted on the roads of Mumbai, who was out to clean the garbage stuck in the drainage

Though Mumbai has seen people like Afroz Shah, the man behind mega-beach cleanup drive of Versova where five million kilos of filth was cleared coming forward to take Swachh initiatives, still, there is a long way to go for the city to get the title ‘Swachh Mumbai’.

More than half of the total waste produced by the city is dumped straight into the 180-foot-high Deonar landfill, which is also Asia’s oldest and largest dumpsite. Deonar along with other dumpsites in Mumbai are way past its limit and are overflowing dangerously. Last year, Deonar caught fire many times, leaving India’s financial capital in a thick layer of smoke.

The current situation of the city is the result of careless management of waste and its onus lies not just on authorities, but, on the people of the city as well.