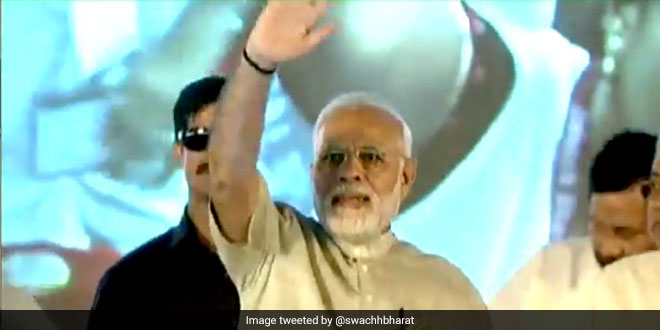 New Delhi: Prime Minister Narendra Modi joins the centenary celebrations of Mahatma Gandhi’s Champaran Satyagraha and kick-started the final leg of what the government claims to be India’s biggest jan andolan currently – the Swachh Bharat Abhiyan’s goal of achieving total sanitation coverage by October 2019. Addressing nearly 20,000 “Swacchagrahis” or cleanliness ambassadors who have been camping in Motihari for a week to work on behavioural change among people of 38 districts of Bihar and help the state achieve its swachhta target on priority. On the closing ceremony of the campaign, PM Modi said,

100 years ago, Mahatma Gandhi started Satyagraha from Chamapran to fight the British rule and make our country free. Today, taking forward his ideas, we all are here to start the Swachh Satyagraha, with an aim to give Mahatma Gandhi a nation of his dreams by October 2, 2019 – a nation that is free from open defecation, diseases and garbage.

Saluting the spirit of Swachhagrahis who were present at the event, PM added,

“I salute the spirit of each one of you, who are sitting here today with a dream to make India completely Swachh. This picture of mass movement is same as the previous Satyagraha, only this time, we are together and fighting a swachh battle.”

The team of 20,000 Swachhagrahis at Gandhi Maidan in East Champaran, gave a warm welcome to hon'ble PM @narendramodi who will be honouring the Swachhagrahi champions for their contribution towards the #SBM. #ChaloChamparan #चलो_चंपारण pic.twitter.com/L39RpYmzFZ

The PM also said that Bihar has shown the most improvement in Swachh Bharat Mission in last few weeks, he said,

Once, Bihar was known as the only state in India that was lagging behind in swachhta. Today, Bihar has shown the most improvement in Swachh Bharat Mission, in last one week, the state has built more than eight lakh toilets and will soon catch up with the national average.

Four states of India – Bihar, Uttar Pradesh, Odisha and Jammu and Kashmir have pledge to make swachhta their priority. Together these states in last one week of Chalo Champaran campaign, have built around 26 lakh toilets.

Speaking about the overall mission, PM Modi said that under Swachh Bharat Abhiyan, more than 7 crore toilets have been built in India. The sanitation coverage of the country has moved up from mere 38% in 2014 to 80% today.

“This swachhta mission is the biggest jan andolan anyone has seen. The way our country is progressing through Swachh Bharat Abhiyan, it can be a good case study for the world.”

PM Modi also announced that the government from April 14 will kick-start another Abhiyan and that will be called – Gram Swaraj Abhiyan, with an aim to make village life healthy. PM Modi added,

“It has been revealed in many of our surveys and studies that the children of ‘open-defecation free’ villages are leading a healthy life. There diarrhoea cases have been reduced; children growth and mental health is stable. With a mission to give all village people a healthy lifestyle, the government is launching this initiative.”

PM Modi also felicitated the Swachhagrahis of India for their exceptional work for making the country swachh in this event with a shawl and Rs 51,000 cash award. Apart from this, he also laid the foundation stones for various projects in the state like four sewerage projects, worth Rs 1,111.56 crore aimed at creating a sewage-treatment capacity of 60 million litres daily (MLD) for Patna, at Motihari.

The hon'ble PM @narendramodi is now felicitating the Swachhagrahi champions in East Champaran, Bihar, for their support, dedication, and commitment towards the #SBM. #ChaloChamparan #चलो_चंपारण pic.twitter.com/6LUnewp1lw