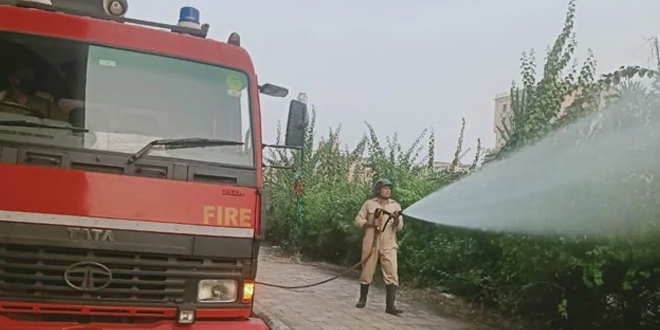 New Delhi: The National Green Tribunal (NGT) has directed all the Municipal Corporations and Local Bodies in the national capital region and other cities with air quality ‘poor’ and worse, to take steps to ensure sprinkling of water before sweeping of roads. A bench of the NGT, headed by its chairperson Justice Adarsh Kumar Goel, also directed to take further steps to plant grass, raise small herbs and shrubs on the sides of the pavements and road shoulders and on open dusty areas. It also said the pavements may also be appropriately covered so as to prevent the generation of dust.

Accordingly, we direct all the Municipal Corporations/local bodies in NCR where air quality levels are normally non-compliant and in all other cities with the air quality ‘poor’ and above to take necessary steps to ensure sprinkling of water before sweeping of roads, using treated water from STPs, and take further steps of the planting of grass/raising small herbs and shrubs on the sides of the pavements/road shoulders and on open dusty areas, including the areas on the sides of the pavements/right of way, the bench said in its order dated December 3.

The water to be used for the purpose of sprinkling should be STP (sewage treatment plant) water and not the freshwater. Further mitigation which may be considered is the planting of grass/raising small herbs and shrubs on the sides of the pavements and on open dusty areas including the areas on the sides of the pavements. The pavements may also be appropriately covered so as to prevent the generation of dust, the NGT noted in its order.

The tribunal said that attention also needs to be given to stop the burning of biomass/waste and regulate construction and demolition activities following the laid guidelines and protocols under the Graded Response Action Plan/National Clean Air Programme.

All the Municipal Corporations and Local Bodies may send their reports to the Principal Secretary, Environment of the State, heading the Air Quality Monitoring Committees (AQMCs), once in a quarter, the bench said and added that the Principal Secretary, Environment heading the AQMCs may compile the data and furnish the same to the Central Pollution Control Board.

The bench was hearing an application filed by RS Virk seeking remedial action to mitigate the impact of dust pollution arising out of dry sweeping of roads in metro cities.

The applicant said that dust pollution contributes to about 43 per cent of the air pollution and suggested that dust suppressants should be used along with water as a remedial measure.

COVID-19 Vaccine May Be Ready In Some Weeks, Vaccination To Begin After Scientists’ Nod: Prime Minister