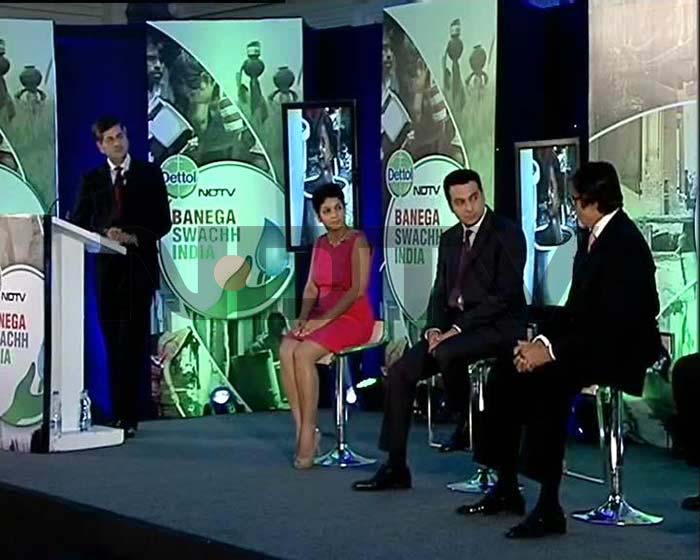 Amitabh Bachchan walks in for the launch of the Dettol NDTV Banega Swachh India campaign.

NDTV and Dettol along with other key partners have launched a nationwide campaign called Banega Swachh India. The two-fold aim of this initiative is to create awareness about the importance of proper hygiene and sanitation in rural India, and raise funds to build toilets.

Melinda Gates speaks up for sanitation problem in India and lends her support to Banega Swachh India campaign. She described it as one of those issues that Bill Gates and she calls an upstream issue, which is if you can get people access to both clean water and sanitation, you can change their nutritional outcomes.

The facts are striking; in our country at least thirty children under the age of five die every hour of diarrhoea, says Dr Bindeshwar Pathak, Founder, Sulab International. I am glad to see Government making Sanitation a priority issue and emphasising its importance, he added.

NDTV Dettol - Banega Swachh India bus will be flagged off in October, which will cover around 400 villages across 8 states - Haryana, Rajasthan, UP, Bihar, Jharkhand, Chattisgarh, MP & Maharashtra. The objective of the bus will be to create awareness around hygiene and sanitation through interactive videos, flyer distributions, posters, hand-washing sessions and street plays. The partners in the initiative will continue with an ongoing dialogue for the next year to explore more opportunities for making a difference towards this initiative.
Related Topics:
Up Next