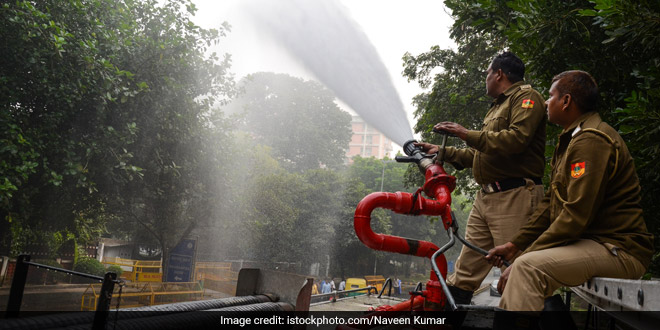 New Delhi: The National Green Tribunal (NGT) has directed 23 states and Union territories, including the national capital Delhi and Chandigarh, to prepare action plans within two months to bring the air quality standard within the prescribed limit. Noting that there are 102 cities where air quality does not meet the National Ambient Air Quality Standards, the panel formed an Air Quality Monitoring Committee (AQMC), comprising directors of environment, transport, industries, urban development, agriculture departments and member-secretary of state pollution control boards.

The NGT said the chief secretaries of the states and administrators of the Union territories will be personally accountable for failure to formulate action plans. The states and Union territories asked to prepare action plans are: Maharashtra (17 cities); Uttar Pradesh (15); Punjab (9); Himachal Pradesh (7); Odisha and Madhya Pradesh (6 each); Assam, Andhra Pradesh and Rajasthan (5 each); Karnataka (4), Bihar, Chhattisgarh and Telangana (3 each); Gujarat, Jammu and Kashmir, Nagaland and Uttarakhand (2 each); and Jharkhand, Delhi, Chandigarh, Meghalaya, Tamil Nadu and West Bengal (1 each).

Also Read: ‘How Do You Propose To Deal With Bio-Waste In 23,684 Hospitals’: NGT To Bihar’s Department Of Health

The NGT said the AQMC will function under the supervision of principal secretary, environment, of the concerned state/UT.

The action plans may take into account the Graded Response Action Plan (GRAP), the CAP and the action plan prepared by Central Pollution Control Board as well as all other relevant factors, it said.

A bench headed by NGT Chairperson Justice Adarsh Kumar Goel said the action plans be placed before another committee comprising Prashant Gargava, member-secretary, CPCB, Mukesh Khare, professor, IIT-Delhi, and Mukesh Sharma, professor, IIT-Kanpur who shall examine the plans. The action plans may be forwarded to the CPCB by December 31 and the CPCB chairman shall approve the same by January 31 next year, the bench said.

The action plan will include components like identification of source and its apportionment considering sectors like vehicular pollution, industrial pollution, dust pollution, construction activities, garbage burning, agricultural pollution including pollution caused by burning of crop residue, residential and indoor pollution etc. The action plan shall also consider measures for strengthening of Ambient Air Quality (AAQ) monitoring and steps for public awareness including issuing of advisory to public for prevention and control of air pollution and involvement of schools, colleges and other academic institutions and awareness programmes, it said.

The tribunal said action plans should be consistent with the “carrying capacity” assessment of these cities in terms of vehicular pollution, industrial emissions and population density, extent of construction and construction activities etc.

The NGT asked the CPCB and state pollution control boards to develop a public grievance redressal portal for air pollution complaints, and a supervisory mechanism for their time-bound disposal. “The CPCB and states shall file a composite action plan with timelines for its execution which shall not be more than three months,” the tribunal said, adding that the Environment Ministry will provide the requisite fund for the purpose. The tribunal will now consider the matter in the last week of February next year.