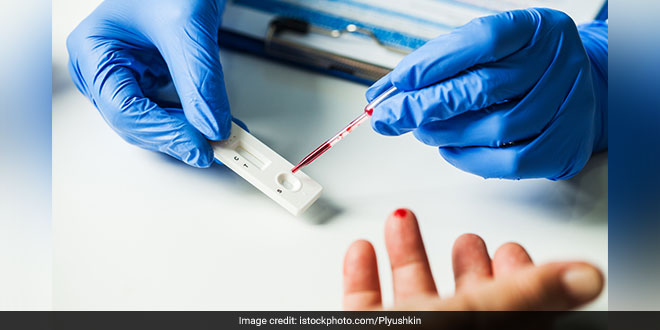 Ahmedabad: A serological survey of around 5,000 people from different parts of Ahmedabad city in Gujarat has revealed that 81.63 per cent of the sampled population had developed antibodies against COVID-19, officials said on Monday (July 19). People who have taken both doses of coronavirus vaccines had high levels of sero-positivity as compared to those who were yet to be inoculated, they said, citing findings of the recent survey. The survey to detect sero-positivity for antibodies against SARS-CoV2, which causes COVID-19, was conducted by the Ahmedabad Municipal Corporation (AMC) between May 28 and June 3, when the second wave of the pandemic was subsiding. Sero-positivity essentially means the presence of antibodies in the blood serum.

We carry out sero-surveillance studies at regular intervals to detect antibodies. Overall, 80 per cent sero-positivity has been detected in the general population of Ahmedabad. Those who took both the doses had high levels of sero-positivity as compared to those who took none, said AMC Medical Officer of Health Dr Bhavin Solanki.

A total of 5,001 samples were collected as part of the study, out of which 32 samples were rejected for various reasons and results were available for 4,969 samples – 2,354 males and 2,615 females, he said. Out of these, 4,056 samples tested positive for antibodies against SARS-CoV-2, giving a positivity of 81.63 per cent, said an AMC report.

A total of 1,938 males demonstrated the presence of antibodies, giving the positivity of 82.33 per cent, while 2,118 females, which comes to 80.99 per cent, had antibodies. Thus, the sero-positivity is higher among males as compared to females, the report stated.

The report said more than 80 per cent of the population had antibodies against COVID-19 on account of their past infection, vaccination or both. Of the total 2,887 persons in the sample size who did not have a history of coronavirus infection and who were not vaccinated yet, antibodies were found in 2,216 persons, which comes to 76.76 per cent, the lowest in the entire sample. On the other side, out of 158 persons who had both COVID-19 in the past and took two doses of vaccines, 154 persons, which comes to 97.47 per cent, had antibodies, the report said. Moreover, antibodies were found in 164 out of a total 173 persons (94.80 pc), who had COVID-19 in the past but took only one vaccine dose (when the survey was underway), it said.

Among the non-vaccinated, those who were infected with COVID-19 had higher sero-positivity (81.93 per cent) than those without any history of the viral disease (76.76 pc), the report stated.

As of May 2021, the study estimates 81.63 per cent sero-positivity for antibodies against SARS-CoV2 in general population of Ahmedabad, it said. The available data is insufficient “to comment on the status of herd immunity for the entire city”, the report said.

COVID-19 Pandemic Could Explode Due To Crowding During Festive Season: AIIMS Doctor

COVID-19 Explained: What is ‘Long COVID’?