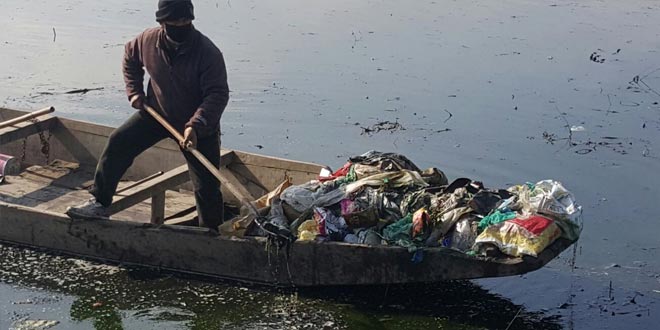 Taming the monster of plastic is proving to be a challenge for most around the world. Compared to recycling infrastructure available in most cities, the amount of plastic waste generated is too high to be treated. India generates more than 15,300 tonnes of plastic waste every day, of which 9,000 tonnes was recycled and the rest dumped in landfills. Municipal corporations across India are trying to adopt other measures of dealing with plastic waste, such as converting them into fuel or using them for road construction. Srinagar Municipal Corporation (SMC) is the latest among urban municipal corporations planning to use fuel from plastic waste to tackle the city’s plastic problem.

The SMC held a meeting on November 30, where the SMC Commissioner Riyaz Ahmed Wani discussed the possibility of turning 20 per cent of Srinagar’s total waste collection to fuel for use in cement industries and brick kilns in and around the city. The meeting, which also saw the presence of Pradeep Singh, Advisor to the state’s Chief Minister Mehbooba Mufti, discussed in length the plastic waste problem of the city and how utilising it for fuel can help the city in terms of better waste management. As per the Central Pollution Control Board’s report on Assessment and Characterisation of Plastic Waste In Cities, Srinagar generates around 51 metric tonnes of plastic waste daily. The city’s sole waste recycling plant is not enough to handle the amount of plastic waste generated daily.

Our sole waste recycling plant has a capacity of handling 20 to 25 metric tonnes of plastic waste daily. If we can send at least 10 to 15 tonnes of our daily plastic waste for conversion to fuel, our city will no longer have to see plastic waste here and there, said Riyaz Ahmed Wani, Municipal Commissioner, Srinagar.

Conversion of plastic to fuel is already being implemented by some urban municipalities. East Delhi Municipal Corporation recently launched a pilot project to convert plastic waste into fuel. Goa has also built two plants to convert plastic waste from Panaji and Margao to fuel and use it for other purposes. A total of 27 cement industries and brick kilns are operational around Srinagar and use around 8,000 litres of fuel daily. Converting even 15 tonnes of plastic daily can completely eradicate these industries’ and kilns’ requirement of fuel. SMC is planning to bring experts on board to begin the project, which is expected to get off the ground by mid-2018.

Srinagar has had a troublesome few years as far as waste management is concerned. In 2015, the SMC launched a much-hyped waste to energy project and was supposed to establish the first 5 megawatt (MW) energy plant in the state. However, the project is yet to take off as only 15 per cent of Srinagar’s waste comprises dry and burnable material which is not sufficient to keep an energy plant running.  In March 2016, the municipal corporation began clearing 3,000 metric tonnes of garbage from the city and has around 1,350 tonnes left to clear.

We have a massive task ahead of keeping Srinagar clean and there is still a long way to go. If the plastic part of our city’s solid waste problem is taken care of, it will become much easier to manage waste in Srinagar, said Mr Wani.

Srinagar’s performance in Swachh Survekshan 2017 was poor, as the city managed to secure a poor rank of 241 out of 434 cities. Solid waste management in the city remains a concern and Srinagar’s plan to convert some of its plastic waste to fuel, may be a workable solution but only if the municipal corporation can ensure that infrastructure required for the conversion is not just set up but also is viable enough to sustain operations.

Also Read: United Nations Lauds The Way Kerala’s Alappuzha Manages Its Waste And Does Away With Landfill

Now A Toilet That Can Flush Itself: Rajdhani, Shatabdi To Have High-End Toilets In 29 Trains