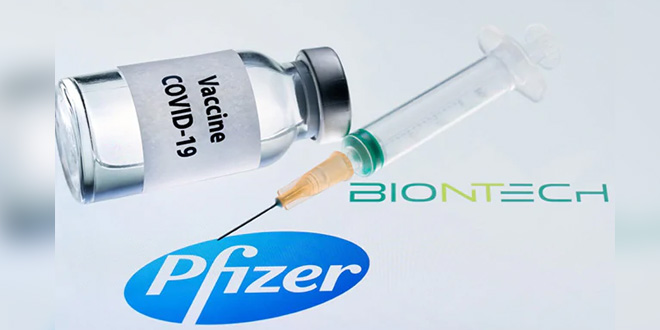 New York: The ongoing Phase 3 clinical trial of Pfizer/BioNTech’s coronavirus vaccine has confirmed its protection lasts at least six months after the second dose. The companies said that the vaccine remains more than 91 per cent effective against disease with any symptoms for six months. The vaccine also appeared to be fully effective against the worrying B.1.351 variant of the virus — which is the dominant strain circulating in South Africa and which researchers feared had evolved to evade the protection of vaccines.

The vaccine was 100 per cent effective against severe disease as defined by the US Centers for Disease Control and Prevention (CDC), and 95.3 per cent effective against severe COVID-19 as defined by the US Food and Drug Administration (FDA). Safety data from the Phase 3 study has also been collected from more than 12,000 vaccinated participants who have a follow-up time of at least six months after the second dose, demonstrating a favorable safety and tolerability profile, Pfizer and BioNTech said in a joint statement.

On Wednesday (March 1), the companies said a small trial of volunteers aged 12 to 15 showed 100 per cent efficacy in that age group.

These data confirm the favorable efficacy and safety profile of our vaccine and position us to submit a Biologics License Application to the US FDA, said Albert Bourla, Chairman and Chief Executive Officer, Pfizer.

He added, “The high vaccine efficacy observed through up to six months following a second dose and against the variant prevalent in South Africa provides further confidence in our vaccine’s overall effectiveness.”

The company has been studying the vaccine in more than 46,000 volunteers and has noted 927 cases of confirmed COVID-19.

In South Africa, where the B.1.351 lineage is prevalent and 800 participants were enrolled, nine cases of COVID-19 were observed, all in the placebo group, indicating vaccine efficacy of 100 per cent (95 per cent CI, [53.5, 100.0]). In an exploratory analysis, the nine strains were sequenced and six of the nine were confirmed to be of the B.1.351 lineage, the company said.

Also Read: Do You Still Need Both Doses If You Have Already Had The Infection? WHO Expert Answers COVID-19 Vaccination FAQs

These datas support previous results from immunogenicity studies demonstrating that BNT162b2 induced a robust neutralising antibody response to the B1.351 variant, and although lower than to the wild-type strain, it does not appear to affect the high observed efficacy against this variant, the company stated. It also noted that no serious safety concerns were observed in trial participants up to six months after the second dose.

Side effects were generally consistent with previously reported results. Vaccine safety has now been evaluated in more than 44,000 participants aged 16 years and older with more than 12,000 vaccinated participants having at least six months of follow-up after their second dose, the statement read.