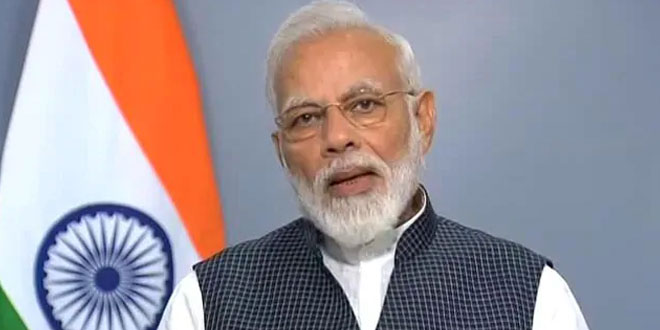 He said that at ‘Bowenpally Sabzi Mandi’, waste is now being turned into wealth.

We have observed that in sabzi mandis, vegetables rot due to multiple reasons spreading unhygienic conditions. However, traders at Hyderabad’s Bowenpally Sabzi Mandi decided to produce electricity out of waste vegetables. This is the power of innovation. At Bowenpally Sabzi Mandi, waste is now being turned into wealth. This is the journey of turning garbage into gold. From there almost 10 tonnes of waste is collected in a plant every day. Also, 500 units of electricity is produced daily apart from about 30 kg biofuel, he added.

The Prime Minister said that that the electricity which is produced from the waste material is used to illuminate the mandi and the bio-fuel is used in the mandi canteen for cooking. Mentioning the innovation of Badaut Gram Panchayat in Haryana’s Panchkula, PM Modi said,

There was a problem of drainage in the village resulting in puddles of filthy water which led to diseases. People of Badaut decided that they will turn this waste into wealth. The villagers started collecting the water at a place and started filtering it the filtered water is now being utilised to irrigate the fields. Thus, freedom from polluted water, filth and disease and additional water to irrigate the field.

He said that protecting the environment also opens up new avenues of income is evident from Arunachal Pradesh’s Tawang. “Since ages, in this area, a paper is produced called ‘Mon Shugu’ from the bark of a plant called Shugu Sheng. Thus, in order to make this paper, it is not necessary to cut trees. Also, no chemical is used in the production of Mon Shugu, making it safe for the environment as well as health. A social worker Gombu has taken it upon himself to revive the craft. It is creating employment opportunities for the locals,” he said. PM Modi on Sunday addressed the 73rd episode of the programme and first episode of the year 2021.