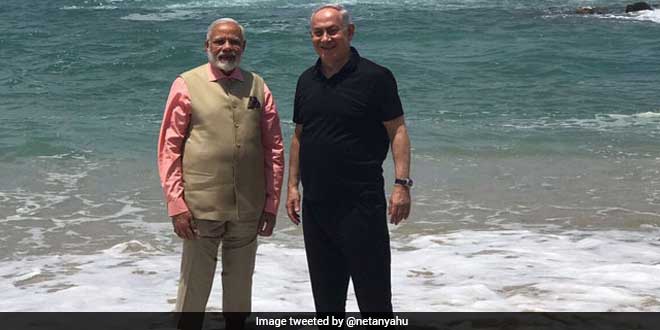 Dor (Israel):  Prime Minister Narendra Modi, accompanied by his Israeli counterpart Benjamin Netanyahu, on July 6, witnessed a demonstration of sea water purification at a desalination plant here. The two leaders stopped at Dor beach on their way from Haifa to Tel Aviv to view the demonstration at the desalination plant. India is looking to Israel for cooperation in water management and recycling as the country is renowned for its expertise in these areas. On July 5, following bilateral discussions led by Modi and Netanyahu in Jerusalem, India’s Ministry of Drinking Water and Sanitation signed a memorandum of understanding (MoU) with Israel’s Ministry of National Infrastructure, Energy and Water Resources on a national campaign for water conservation in India.

An MoU on state water utility reform was also signed between the Uttar Pradesh Jal Nigam and the Ministry of National Infrastructure, Energy and Water Resources of Israel.  Earlier on Thursday, Prime Minister Narendra Modi and Benjamin Netanyahu laid floral wreaths at the Haifa Indian Cemetery that contains the graves of 49 Commonwealth servicemen killed in World War I -of whom, 44 were Indians.

Later in the day, the two leaders will also address a CEOs’ round table in Tel Aviv after which PM Modi will interact with Indian students in Israel.

Prime Minister Modi arrived here on July 4 and it is the first ever prime ministerial visit from India to Israel.

Related Topics:
Narendra Modi Recycling Water and Sanitation
Up Next

Road To A Plastic Free City: Surat Aims To Produce Diesel Out Of Plastic Waste