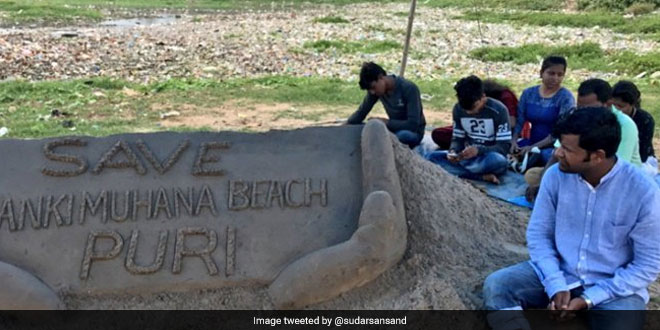 New Delhi: Piles of unattended garbage is a common sight while walking on the famous Bankimuhan beach in Puri. Thousands and thousands of PET plastic bottles littered along with other disposable plastic and general waste items can be found strewn on this beach which is situated 3 km away from the legendary temple of Jagannath. In a bid to fight this filth, renowned sand artist from Odisha, Sudarsan Pattnaik is sitting on a dharna from today in the hope to restore the former glory of the beach and clean it up completely. “I am protesting (sitting on dharana) through my art against beach pollution at Bankimuhan, #Puri,” tweeted the internationally acclaimed and Padma Awardee, Sudarshan Pattnaik.

I am protesting (sitting on dharana) through my art against beach pollution at Bankimuhan, #Puri . pic.twitter.com/onKO6bN6BR

With ‘Save Bankimuhan beach in Puri’ inscribed on the sand in big and bold letters, the artist is requesting the government to clear the garbage and stop the Bankimuhan Beach Pollution. Currently, the beach is the place where most of the sewage from city hotels and households is discharged. The people living in the vicinity of this beach complain about the health issues they face.

Speaking to NDTV, one of the residents from Puri added, my son is always unwell, so many mosquitoes are here but worst is during heavy rains when this dirty water over flows and enters our houses and also mixes with the beach.

Sudarsan Pattnaik along with many other citizens are on a hunger strike starting from today. Their agenda is simple – to get the beach cleaned

@CMO_Odisha @Naveen_Odisha Sir, you had promised to clean and stop this pollution. @sudarsansand is not alone, we all are asking the same. https://t.co/udECbRhaXk

Puri, an important destination for pilgrims, generates around 100 tonnes of solid waste every day and a lot of it is the plastic waste, most of which lands up on Puri’s beach. It has turned into a dump yard in the recent years, though during the famous Rath Yatra this season many initiatives were taken to teach tourists and people about the importance of using garbage bins and not littering on roads or beaches, still, a lot needs to be done in order to achieve a Swachh Puri. This year in February, a carcass of a 32-feet long whale was found in Puri and as many as five such cases have been reported in the last 11 years. The reason for the recent death is believed to be consumption of plastic that the whale couldn’t digest and died.

Say No To A Plastic Bag And Opt For An Alternative, Actor Juhi Chawla Spreads This Message For A Swachh India