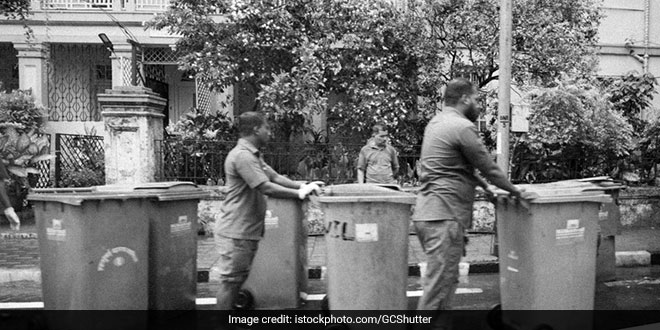 New Delhi: The Centre told the Supreme Court on Wednesday that sanitation workers in the country have been provided with requisite protective kits and the authorities are following the guidelines of the World Health Organization (WHO) on the coronavirus pandemic. The Centre said this before a bench of Justices N V Ramana, S K Kaul and B R Gavai which was hearing, through video-conferencing, a plea seeking directions to the authorities concerned to provide personal protective equipment (PPE) to sanitation workers who are carrying out their work amid coronavirus or COVID-19.

Advocate Mehmood Pracha, appearing for the petitioner, argued that sanitation workers are the least protected and vulnerable but proper protective kits have not been provided to them.

When Mr. Pracha referred to media reports and said that one sanitation worker had died in Mumbai and such incidents have happened in other places also, the bench observed,

Mr. Mehta had objected to Pracha’s submissions regarding death of sanitation workers in Mumbai and at other places.

The bench, which disposed of the plea while taking into account the argument advanced by the Centre, told Mr. Pracha that he could approach the concerned high court if he has any specific case.

The plea, filed by social activist Harnam Singh, had said that sanitation workers have no adequate protective gears while carrying out their work.

The present system of making the safai karamcharis /sanitation workers clear household waste and clean areas which carry the risk of potential infection of the coronavirus without the COVID-19 protective gear/PPE, is callous and amounts to violation of their fundamental right to life, the plea said.

It said that unlike doctors, who work in more controlled and sanitised environment, sanitation workers function in unhygienic conditions and run a higher risk of getting infected with the virus. The plea had also sought a direction to the authorities to conduct COVID-19 testing of sanitation workers and their family members.

Drowning In Plastic: Visualising The World’s Addiction To Plastic Bottles