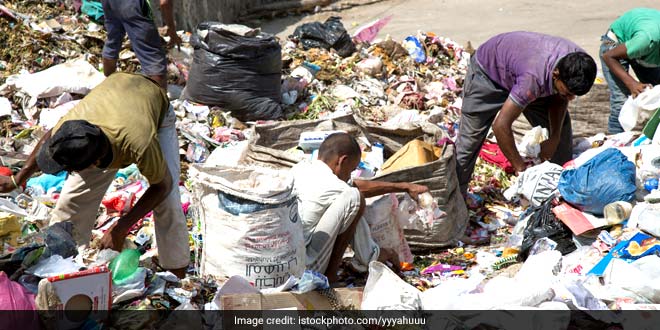 New Delhi: Four months after objections raised by environmentalists and NGOs, the government finally reduced the Goods and Services Tax (GST) rate on scrap items on October 6, when it announced various revisions in the GST norms. Among the list of 27 commodities that were devalued, the GST Council drastically reduced the GST from 28 per cent to 5 per cent on electronic waste and from 18 per cent to 5 per cent on plastic waste, cullet or other waste or scrap of glass and rubber waste.

Launched on midnight of June 30, it was termed as India’s biggest tax reform since Independence that aimed to bridge the fiscal gaps between states and stitch together a common market across different parts of India. The ‘one tax, one nation’, however, was seen as a hindrance to efficient waste management goals, as under GST, the money value of scrap materials came down from 3-5 per cent in pre-GST era to 12-18 per cent in GST. In July when the government imposed the ambitious tax reforms, the ragpickers or waste collectors were severely impacted after the resale value dipped and no trader was willing to buy a devalued material. As most of items were recyclables (plastic waste, e-waste, discarded cardboard, paper waste), its low value put a stop on the recycling industry in many parts of India.

Post the increased GST rates, the customer/waste generator and the informal sector saw no economic benefit in it. To cite an example, plastic carry bags and wrappers were never getting recycled in India because it was not economically viable to recycle them. But the other kinds of recycling was thriving especially through informal channels because the resource/ raw material for it was free but now it comes at a cost making the industry infeasible. Taxing scrap didn’t seem to be in line with the Swachh Bharat Mission that should ideally facilitate more recycling, says Swati Singh Sambyal, Programme Manager, Centre for Science and Environment

According to a June 2015 report by the Federation of Indian Chambers of Commerce and Industry (FICCI), nearly 1.6 million people depend on selling of scarp to sustain their livelihood and with no fixed income their earning depends on the amount of waste they sell. The income of ragpickers came down by 40-50 per cent in last four months according to Chintan, a Delhi-based NGO that works with waste pickers and other recyclers, to convert waste to social wealth. Chintan had been campaigning to rescind the GST on waste since late May, soon after it was first announced.

A discarded glass bottle of 500 ml to 750 ml size would earlier fetch Re 1 per bottle and post GST the rate for glass waste came down to Re 1 per kilo, which roughly amount to 7-8 bottles depending on its size. Other wastes like plastic also witnessed an adverse impact as price of PET bottles fell by 30 per cent. Price of cardboard waste had come down to Rs 3 per kg from Rs 5.

The new move was widely welcomed by the ragpickers of Safai Sena, a wastepicker and small dealers association based in Delhi. “I have so much unsold waste in my jhuggi. I could neither dump it off because I had paid for it, nor would anyone buy it. It’s good I kept it, so many others just did not have the place-they couldn’t keep plastic bags and glass,” says Ramesh Mahto, a small junk dealer.

Besides impacting the income levels of waste collectors and the recycling industry, the GST norms further burdened the landfills.

GST reform meant both a loss of income for these people, as well as increasing amounts of wastes in overflowing landfills. Chintan also welcomes this move from an environmental perspective. India’s landfills are all unscientific, polluting and over-flowing. Sending any additional waste to them was exacerbating an already existing crisis, said Chitra Mukherjee, Head of Programmes, Chintan.

She further added, “It may be noted that the Ghazipur landfill collapsed even as it received more recyclables for dumping. The GST reduction is likely to ease up the cost of trading in and recycling low value plastics and fewer of these are likely to reach the landfill.