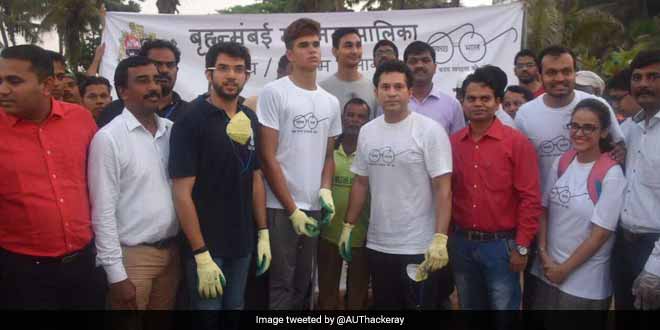 New Delhi: As Swachh Bharat Abhiyan enters in its third year, several celebrities, ministers are pledging towards a cleaner and greener India. As a tribute to the propagator of cleanliness, Mahatma Gandhi on his 148th birth anniversary , cricket icon Sachin Tendulkar has a special message and appeal to the citizens of India. The former captain of India urged everyone to use this special occasion and begin their swachh journey.

“Each one of us can contribute towards making India both Swachh and Swasth. Let’s start today on the occasion of #GandhiJayanti!” he tweeted.

Each one of us can contribute towards making India both Swachh and Swasth. Let's start today on the occasion of #GandhiJayanti! pic.twitter.com/QMtQO7YcMc

‘Swachhata Hi Seva’, a sanitation drive for fortnight was launched on September 15 across India in a bid to re-trigger the spirit of Swachh Bharat Abhiyan ahead of its third anniversary. Since then, several celebrities, ministers and sports personalities have come forward and pledged their support towards making India cleaner and greener. These celebrities include Rajinikanth, Anushka Sharma, Anil Kapoor, Sudarsan Pattnaik, Jhulan Goswami, Ajinkya Rahan. Cricket legend Sachin Tendulkar is the latest to join the cleanup brigade.

On Tuesday, he along with son Arjun Tendulkar and Yuva Sena President Aaditya Thackeray took to the streets of Mumbai and carried out a swachhta drive. The trio helped the Brihanmumbai Municipal Corporation (BMC) workers in removing garbage near the famous fort of Bandra in the wee hours of the morning.

Upset by the issue of littering Sachin Tendulkar said, Literally, at every feet trash can be seen despite bins installed everywhere. We call our India our motherland and still we spit and litter on her. It is my humble request to citizens to not to litter like this.

He further added, “We often leave it on the ‘kachrawaala’ to remove the trash lying on the roads, but we are the ones who are responsible for littering. Their duty is to maintain the cleanliness and ours is to not litter in the first place. By maintaining cleanliness we are not only ensuring a Swachh Bharat but also a Swastha Bharat.”

We each have to do our bit to keep #IndiaClean. So, pick a group of friends, a street, and together let’s #CleanUp India. #SwachhataHiSeva pic.twitter.com/k8Z7o8Faca

Prime Minister Narendra Modi, who had nominated Sachin Tendulkar as a Swachh Ambassador in 2014, appreciated the efforts of the Master-Blaster and said, “The continued commitment of @sachin_rt towards a @swachhbharat is deeply appreciable. People across India will be inspired by his efforts.”

The continued commitment of @sachin_rt towards a @swachhbharat is deeply appreciable. People across India will be inspired by his efforts.

The prime minister also thanked Arjun Tendulkar and Aaditya Thackeray for their participation.

Happy to see wide scale participation by youngsters, including Arjun in #SwachhataHiSeva. Our Yuva Shakti will make a Swachh Bharat. https://t.co/m60mYvsY7w

I congratulate my young friend @AUThackeray for participating in a cleanliness initiative in Mumbai & adding momentum to #SwachhataHiSeva.

In last three years, the former cricket captain has carried out several activities along with spreading the message of sanitation. For instance, in 2014 he had adopted two villages – one in Nellore district of Andhra Pradesh and the other the Donja village in Osmanabad district of Maharashtra to help increase the sanitation coverage. On Independence Day, he also urged fellow citizens to set the goal of ‘Swachh Bharat, Swasth Bharat’ for the years to come.