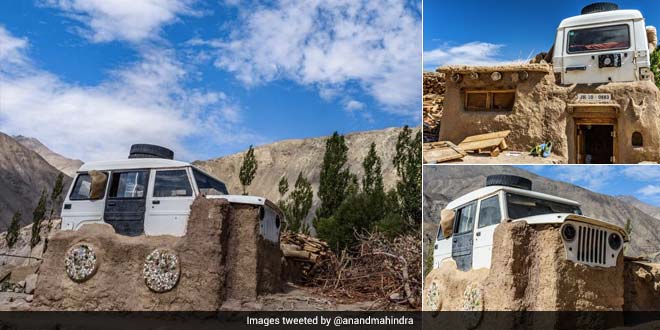 New Delhi: Remember Aamir Khan’s character Phunsuk Wangdu in the film 3 Idiots? He was the man known for creating something extraordinary that is beyond an ordinary man’s imagination. In real life, Sonam Wangchuk is that man – engineer, innovator and educator who inspired Aamir Khan’s character in the movie. His institute Himalayan Institute of Alternatives in Ladakh got famous back in 2009 for its knowledge and creativity when the world got to know about it through the movie 3 idiots.

9 years after, today, the world once again is swooning over the out of box creativity from the institute, thanks to the viral picture of a ‘roof-with-a-jeep’ that is taking rounds of the internet, courtesy Anand Mahindra, Chairman Mahindra group. Not to forget, the innovation is highlighting how different routes can be taken by the authorities in recycling auto components.

Also Read: ‘There Is A Lot You Can Do With Waste’: Startups In India Giving A Unique Spin To Waste Management

A friend sent these pics from Sonam Wangchuk’s Himalayan Institute of Alternatives, Ladakh. Recycling a Mahindra car into a home roof. A way of life at the Institute, where nothing gets discarded.

A friend sent these pics from Sonam Wangchuk’s Himalayan Institute of Alternatives,Ladakh.Recycling a Mahindra car into a home roof.A way of life at the Institute, where nothing gets discarded.Well this will compete with our auto-shredding venture but it’s far more creative! pic.twitter.com/p7UwgOvtxD

The photographer who clicked these pictures also shared the creativity with the world on her social media, she said,

“Retaining the old and making it home.. so fascinated i was with the creativity of recycling n seeing the old Mahendra jeep used to make a home that i had to share my pictures.”

Also Read: Make Way For The Trash Band: School Students In Ladakh Show The World How To Upcycle Waste Into Musical Instruments

When these photos were taking rounds on social media, Sonam Wangchuk told everyone about the “lovely story” behind the jeep that reflects how the local education system can have a fruitful impact on the environment.

Dear Mr @anandmahindra the Jeep you tweeted has a lovely story. It was instrumental in educational campaigns in the remotest frontiers of Ladakh… which finally took the matriculation results from 5% to 75%. It served us faithfully between 1997 to 2007 before taking new avatara.

Sonam you’re absolutely right—that IS a lovely story. How do I find out more about the educational campaign you referred to? And how we can support the campaign if the job is unfinished? @Wangchuk66 @manoj_naandi https://t.co/JgidIlv5qU

This exchange is currently winning hearts all over social media, here’s a look

It amazes to see how you manage to innovate in everything that you do, I am proud to have met you in person and I continue to be inspired by all what I hear and see of your work! My offer to volunteer support for your institute in developing your Tourism stay place still stands!

This , I see as the major positive of Social Media. Bringing live stories to the notice of the right people and connecting like minded people towards a common good for the society as a whole.

UP, Bihar Lagging Behind In Construction Of Toilets Under Swachh Bharat Mission: Niti Ayog