New Delhi: The national capital continues to battle Air Pollution as its Air Quality Index continues to remain in the mark of ‘Very Poor’ category and threatening to breach it every now and then. While the authorities continue to grapple for solutions to battle the crisis in the city, a 24-year-old, Naman Munot, took it upon himself to protect slum kids who are more vulnerable to Air Pollution. Naman, a graduate from BITS Pilani, who has also worked on a research study on Air Pollution in Delhi under Dr Gazala Habib, Associate Professor IIT Delhi, goes out on the streets of Delhi every day to teach the children the most important thing – how to battle city’s Air Pollution emergency. 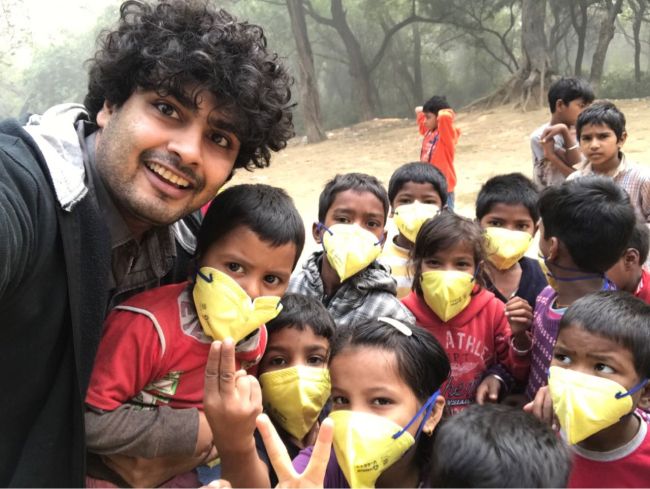 Meet Naman Munot, who is on a mission to teach Delhi’s street kids the most important thing – how to battle Air Pollution

Also Read: Fighting Air Pollution: Here Is What Delhi Can Learn From Mexico City, Once The World’s Most Polluted City

From slums to underneath flyovers, Naman covers every location, just to educate and distribute the masks to the children.

We all know how bad Delhi’s air is, but, sadly, the kids living across the streets in Delhi don’t know this situation. They are clueless how this toxic air is killing them. Seeing this ‘emergency’ like situation in the city, I started an endeavor of going out on the streets to educate the kids on how they can battle air pollution. By just providing a mask to them you can save him/her from asthma, lung cancer, and other respiratory diseases, says Naman Munot. 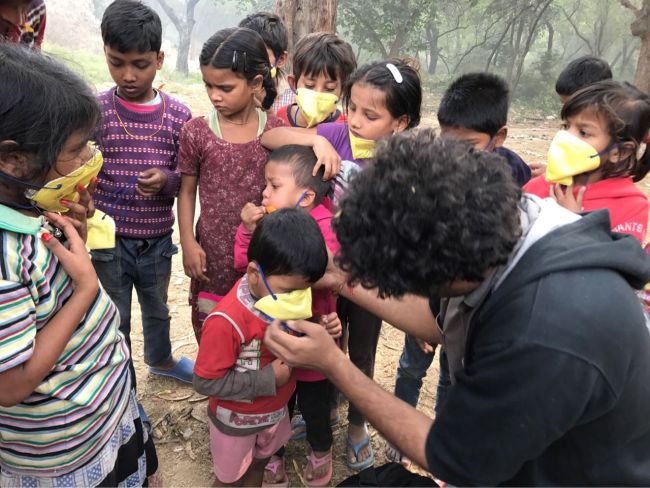 By just providing a mask to the streets kids you can save him/her from asthma, lung cancer, and other respiratory diseases

When I was doing research on Air Pollution that’s when I reliased how impactful and deadly a small particle – PM 2.5 is. My research on Delhi’s Air Pollution crisis has also made me reliase that the condition will only continue to worsen in the near future. And, I am doing this to make people like me aware that we together can protect millions of children on the streets of Delhi NCR who need our desperate help.

Naman has already reached out to some 1500 children in Delhi. He has taught them the basic things about air pollution, he has guided them how they can use a mask to protect themselves, and how they can clean the mask. By the end of this month Naman’s plan is to cover 3,000 more children.

My urge is that more and more people should join my campaign, all you have to do is head out and just tell them what you know on battling air pollution. Just like you are making sure you are staying protected from the smog and air pollution; teach the unfortunate street kids the same thing. Together we all can fight Delhi’s Air Pollution emergency, signs off Naman who in future wants to dedicate himself at the service of people.

Also Read: Malnutrition Followed By Air Pollution Main Cause Of Diseases In India In 2016: Study

How Air Pollution Is Killing Children?

According to the doctors, the vital organs of children are not mature enough to tackle Delhi’s polluted air and they breathe more air per pound of body weight, so they are affected the most.

The World Health Organisation (WHO) survey also shows that 21 per cent children in Delhi have ‘poor’ lung capacity.

The acute effects of Air Pollution among children include greater incidence of respiratory problems such as cough and suffocation, more frequent respiratory infections, including both upper and lower tracts. While, the long-term effects include, slowing of the rate of growth of lungs and possibly reduced vital capacity when the children grow up to be adults.

Sale Of Petcoke Will Be Considered Contempt Of Court: Environment Panel To Oil Companies