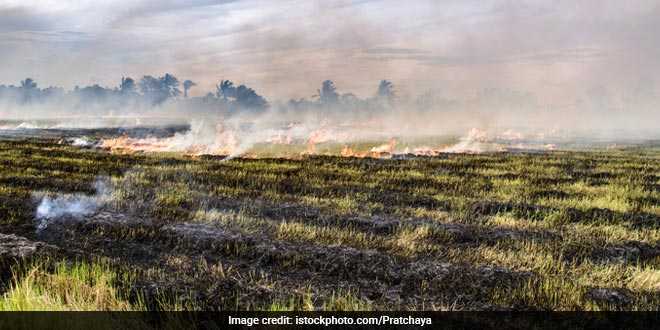 Jalandhar: Several farmers continue to burn stubble near Jalandhar’s Phillaur area in Punjab, on Wednesday. We are helpless, we don’t have any option. The government doesn’t help us or provide any kind of subsidy, says a farmer. Stubble burning is a process of setting on fire the straw stubble, left after harvesting of grains, like paddy, wheat etc takes place.

The process of burning farm residue is one of the major causes of air pollution in parts of north India, deteriorating the air quality around this time of the year. Combing with vehicular emission, it adversely affects the Air Quality Index (AQI) in the national capital, keeping it between ‘very poor’ to ‘severe’ category.

Also Read: Pollution Levels Higher In Delhi This Diwali As Compared To 2019: Central Pollution Control Board

The governments- both Centre and at the state level, take several steps to lessen the pollution. On November 7, Union Environment Minister Prakash Javadekar inaugurated a compressed biogas demonstration plant in Pune for biomass production during a meeting held to discuss “steps taken for prevention of air pollution in Delhi-NCR with emphasis on finding a permanent solution.”

Government is taking all steps to combat air pollution in Delhi and North India and we will be using all possible technological interventions towards that. We have launched a demonstration plant virtually at Pune which produces compressed biogas from biomass, Mr Javadekar had tweeted.

“It’s my pleasure to be present on this occasion. Such technology (biogas plant) will take care of the issue of stubble burning especially in North India,” Prakash Javadekar said.

According to an official statement, top officials of the Union Environment and the Health Ministries and the governments of Delhi, Haryana, and Punjab attended the meeting.

As per data by Punjab Remote Sensing Centre (PRSC) dated November 5, around 40,000 incidents of stubble burning have been reported so far this year.