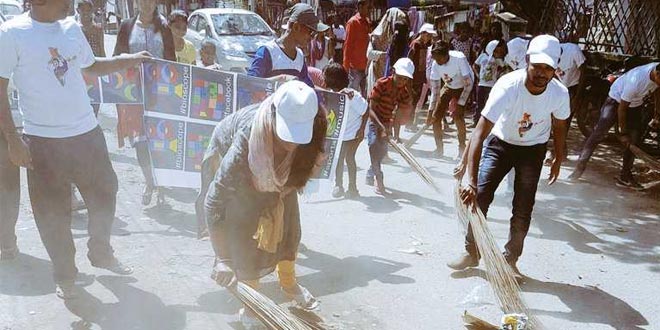 With little over a month to go for the 2018 edition of Swachh Survekshan, municipal corporations across urban India are getting busy in a last ditch effort to improve civic amenities for better rankings. Authorities are caught up in meetings with officials to identify areas which require immediate action that could cost it crucial points. As things get competitive,  Patna Municipal Corporation is also not taking it easy this year. It started its preparations for the Survekshan with a detailed meeting on December 2.

The meeting, held by Patna Municipal Commissioner Abhishek Singh served as a recap of all that the PMC had done in the last one year and whatever plans the municipal corporation has for the future. The previous Swachh Survekshans weren’t very kind to Patna. The city secured a rank of 262 out of 434 in 2017 and was placed even lower, getting the 70th rank out of 73 in 2016. Patna’s rank was lower than many other cities of Bihar, such as Biharsharif and Kishanganj in 2017. This prompted the PMC to take civic matters more seriously and work towards improving its waste management and sanitation.

Despite being the state’s capital, Patna was characterised by a flawed waste management programme and barely any work was done to clean up the city. That resulted in low rankings in the previous surveys. But for the last one year, we have done considerable work to improve Patna’s civic scenario, said Abhishek Singh, Commissioner, Patna Municipal Corporation.

Over 1,000 dustbins have been installed in the city. Around 15 public toilets have been built in the last one year, and the municipality has plans to finish building 20 more by the end of December 31. This will ensure that 75 per cent of Patna’s 120 wards are open defecation free (ODF). The PMC has also got hold of three auto tippers which can go around and collect waste and unload them, in July this year, which has been extensively used to clean the city.

So is PMC confident of a much better ranking this year?

We may see slight improvement this year though nothing miraculous should be expected. This year’s Survekshan focuses on segregation and people in Patna are yet to take up segregation wholly. Moreover, the 2018 edition of the Survey has negative marking, so people unhappy with our services or expecting more may mark us negatively. These are some of the challenges we are coming across for Swachh Survekshan 2018 and our rank, said Mr Singh.

For Patna, segregation and more public toilets remain key challenges that the city plans to address over the course of the next two years. Though this year’s Swachh Survekshan may bring better rankings for Patna, the city’s civic body is not limiting itself to securing a good ranking in the Survekshan. As the Municipal Commissioner emphasised in the meeting with officials, improvement of Patna’s civic infrastructure is the priority and even if it takes some time, plans to achieve it are being worked upon by the municipal authorities.